Restaurant Review: The Four Seasons Returns. But Can It Come Back? 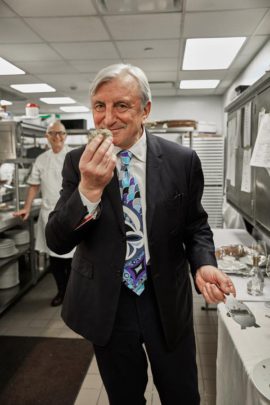 There is a good case to be made for not reviewing the newly relocated Four Seasons Restaurant at all but just leaving it on the slush pile, and that case can be found in court records involving Julian Niccolini.

Mr. Niccolini has operated the restaurant with Alex von Bidder since the mid-1990s, first at its original home in the Seagram Building and now, after a two-year hiatus, in a smaller berth on the other side of Park Avenue. Over that time, he has frequently been celebrated for his charm. Less frequently, he has been a defendant in civil and criminal actions arising from things he was accused of having done to women inside the restaurant.

In 1991, one of his waitresses sued Mr. Niccolini and the Four Seasons, citing sexual harassment. She claimed that for more than three years he had repeatedly rubbed up against her, told her in vulgar terms about his sexual urges and called her “slut,” “lesbian” and other things. Mr. Niccolini denied the charges. 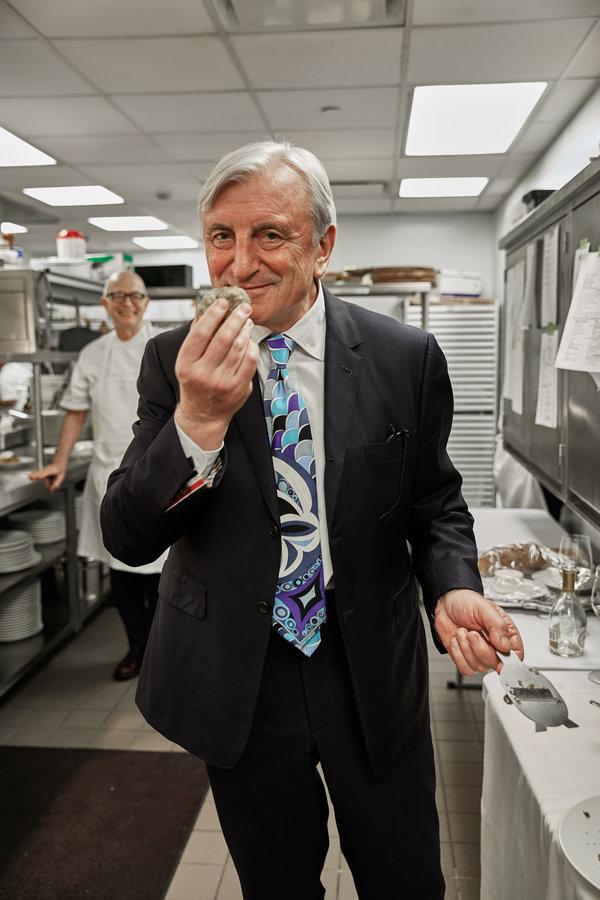 Julian Niccolini, shown here, has owned the restaurant with Alex von Bidder for more than two decades.CreditEllen Silverman for The New York Times

In 2014, a former assistant manager filed suit against Mr. Niccolini, Mr. von Bidder and the Four Seasons, alleging discrimination. The ex-manager said that after she returned from a maternity leave, the restaurant made it difficult for her to pump breast milk during work hours and, about three months later, fired her and replaced her with a man. In a response filed with the court, the defendants denied the allegations. Both suits were settled under terms that have not been divulged.

In 2015, Mr. Niccolini was arrested on a felony charge of sexual abuse. According to a prosecutor, he had attacked a woman at the Four Seasons bar “with such force that he ripped her bra open and caused significant scratch marks on her back and bruising on her hip.” After pleading guilty the following year to a reduced charge of misdemeanor assault, Mr. Niccolini was given a “conditional discharge,” avoiding jail.

The dining room evokes and updates Philip Johnson’s design for the original space.CreditEllen Silverman for The New York Times

Their stance rests, I think, on the idea that writing about powerful men who have been accused of abusing women amounts to condoning the abuse and helping the abusers stay in power. While it’s true that media attention is often like oxygen to restaurants, critics have the power to tell a story other than the one the restaurant is pushing. Even when we’re not writing a pan, a fair assessment often requires weaving shining threads with ugly ones.

The ugliest threads at the Four Seasons happen to be ugly enough to make many people stay away. But there is beauty in the fabric, too.

The Four Seasons has been a significant force in dining: a pioneer in championing American ingredients and wine; an innovator in bringing contemporary design into the restaurant world; a cultivator of an eclectic scene that treated political power, financial success and creative talent as coequal branches of a high society that was peculiar to New York.

Most of this happened some time ago. In its last years in the Seagram Building, the Four Seasons had become a shabby but lovely museum of midcentury architecture and design, with martinis that I didn’t mind overpaying for and food that I did. I was curious about its new incarnation, which opened in August, and curiosity is as good a reason as any for a critic to swing into action.

Diego Garcia, the chef, has made the Four Seasons a seafood restaurant while retaining some classic dishes.CreditEllen Silverman for The New York Times

If I were writing the next chapter in a long history, I’d mention how gracefully Diego Garcia has grown into his new job as the restaurant’s chef. I enjoyed Mr. Garcia’s fish cookery at his last restaurant, a small, bare-bones place in Hell’s Kitchen called Gloria, but he seemed limited by the kitchen’s size.

He works on a grander scale now, with more expensive ingredients and more delicate treatments that still betray his creative streak. He roasts duck because the Four Seasons is famous for it, and makes fresh pasta and risotto because the captains in their black jackets need some place to shave all those white truffles. For all intents and purposes, though, he has turned the Four Seasons into a seafood restaurant, and a very good one.

Raw scallops are outfitted with green apples and caviar.CreditEllen Silverman for The New York Times

It’s not hard to believe he was once a sous-chef at Le Bernardin when you taste, say, the raw scallop slivers in citrus juices, elegantly equipped with tart apple and caviar, or the intensely smooth chowder of tiny, just-cooked clams in a New England-style cream broth that’s pale yellow with butterfat. He knows when to show restraint and when to go all in, taking sea-urchin ravioli that are already head-spinningly rich and draping lobes of sea urchin over them.

The roast duck is a Four Seasons favorite that made the jump to the new space.CreditEllen Silverman for The New York Times

Some of the cooking is boring in the right way. I don’t want surprises in Dover sole à la meunière, and I didn’t get any. It was flawless. The duck will surprise only people who don’t know that duck meat cooked to well-done bastes in its own fat until it is almost a warm confit. Other dishes were boring in the usual sense. The mustard sauce poured around the golden crab cake tasted like cream that was shown a picture of a mustard jar.

Desserts are in the hands of Bill Yosses, back in New York after working as pastry chef in the White House.CreditEllen Silverman for The New York Times

The chapter would also depict the return of Bill Yosses. Anybody who ate his desserts before he disappeared into the White House won’t be surprised by how good they are here. They do have a slight Rip Van Winkle quality, suggesting that Mr. Yosses allowed several new waves in pastry to pass him by, but that’s no criticism. He makes a better baba au rhum than almost anyone in town, his chocolate tart with a salted stripe of caramel is both powerful and precise, and his hazelnut financier balanced over roasted pears is more delicious than almost any almond financier you can find.

He has even improved the restaurant’s signature, the Kate Pierson beehive of cotton candy that sails out to the tables of valued guests. (Apparently I’ve joined that club.)

Cotton candy, a signature of the restaurant, has been improved by Mr. Yosses.CreditEllen Silverman for The New York Times

This being the Four Seasons, the history would have to mention the new restaurant’s interior. It reminded me of the old Philip Johnson dining rooms without making me sad to be here instead of there, a trick I had thought was impossible. The bronze bead curtains have transformed into strings of gilded glass baubles; the flatware and glasses pay homage to the vintage designs used at the original restaurant; and the bar is once again a four-sided island in the middle of a lounge. For the first time you can eat a real meal there, while you watch the Grand Central-bound commuters outside and the cotton candy-bound regulars inside, generally a mature group in tightly knotted ties or heels that echo down the corridor to the dining room like the ticking of a grandfather clock.

All of this and a generous budget (the prices are as exclusionary as ever) could make for a few hours of celebratory sightseeing of a kind that is quickly disappearing from the city. The Four Seasons offers an escape from the outside world. Escaping from what’s inside, however, takes a mental effort that is beyond me and will probably be beyond many others as well, whether Mr. Niccolini is in sight or not. During my three meals, I never saw him.

Restaurants, even grand ones like the Four Seasons, are intimate places; eating is an act that requires trust and a sense of safety. We want to get up from the table feeling restored on all fronts except the financial one. Mr. Niccolini’s actions have done serious damage to his power to provide that feeling, even as he and Mr. von Bidder have made the restaurant better than it has been in years.

This review will not be tied up with a bow. All I have are threads.