Restaurant Review: Hwaban Is the Modern Korean Restaurant Where You’d Take Your Mother 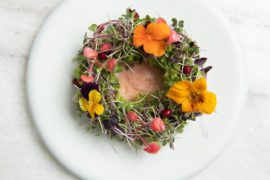 Americans who weren’t born into Korean cuisine have discovered it in many ways and many locales over the past decade or two. Bulgogi folded into tortillas has been handed out through the window of a roving truck. Smoked kimchi has been draped over pulled pork between halves of a cheese-glazed doughnut to make an outdoor food-stall sandwich called the Chonut. Hwe, raw fish eaten with condiments that typically spread across an entire table, has been streamlined to one or two bites in a tasting menu administered by servers in sci-fi tunics. The pork belly dish bo ssam has been reimagined as a whole roasted pork shoulder that a gang of hungry people could use in a bonding ritual involving heads of lettuce, a platter of oysters and a pair of tongs.

More often than not, the audience for these items is young. Youth, in fact, has been a key part of the story of how kimchi and other dishes spread from immigrants’ kitchens to the Instagram feeds of diners without a single Korean ancestor. You might get a Chonut at Smorgasburg with your roommate, take down a bo ssam at Momofuku Ssam Bar with your friends from college and sit at Atomix’s U-shaped counter to celebrate your first anniversary.

Hwaban, which opened in Chelsea in August, is something different. It’s the modern Korean restaurant where you’d take your mother.

The dining room is spare, sleek and uncontroversial. The brick walls have a recent coat of white paint, and there is plenty of light by which to read the menus. The banquettes and benches have gentle curves and soothing neutral colors. The only vaguely menacing items in sight are the canteloupe-size eyeballs hanging on the walls, but they turn out to be high-tech speakers, and the cocktail jazz they play never rises above a murmur.

Just inside the front door is a lattice of shelves holding simple, geometric bowls and teaware. These give Hwaban the look of a cloistered Parisian salon de thé, which it resembles in other ways as well. Exceptional green tea from South Korea is brewed along with tisanes — made from mulberry leaves, mistletoe stems or dried wild pears — that Korean mothers brew in winter for sneezing and sniffling children. 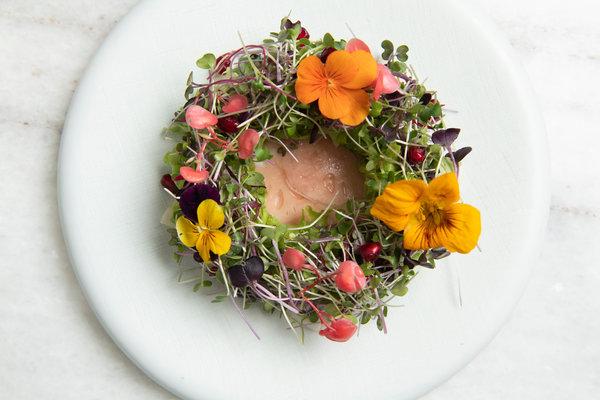 Lotus roots and microgreens are dressed in a “five-flavor-fruit” vinaigrette.CreditEvan Sung for The New York Times

And while some restaurants are saving money by doing without pastry chefs, Hwaban needs two of them to keep up with its obsession with Western-style sweets. One, Ahram Song, is a buttercream specialist who tints and shapes frosting into botanically detailed flower arrangements decorating chocolate or honey-pecan cakes. Another, Lauren Kim, makes the fleecy cheesecake that is carved into slivers the length of a dinner plate; pretty, well-tailored French numbers like a passion-fruit Pavlova or a drum of white cake filled with fresh strawberries and frosted with whipped cream; and the cookies and toffees that are sold by the box, for takeout.

The illusion that you’ve wandered into a tearoom somewhere on the Right Bank is extended by the drinks list, which has only two Korean sojus and a handful of Japanese sakes but several pages of wines from France. The rest of the menu is unmistakably Korean, and very often it is based on Korean family cooking.

“This is my mother’s recipe,” Mihyun Han, who owns the restaurant with her husband, Key Kim, will say on one of her frequent circuits around the tables.

She said it one night about the shaggy white meatball of chicken, tofu and mushrooms — the menu calls it a dumpling — sitting in a warm and transfixing soy-milk broth. Another time, she was talking about what she calls “snowy bibimbap,” a gentle, agreeable wintertime variation on the classic rice dish made with strands of mung bean jelly and shaved burdock, bellflower root, and other vegetables in shades of ivory, cream and bone.

The chef, Woong Jang, does very fine work in white. One of Hwaban’s most luxurious dishes is a length of king crab leg with spinach and a poached egg, all surrounded in a rich pine-nut sauce the color of hotel sheets.

Like the Manhattan restaurants Atomix and Jungsik, Hwaban de-emphasizes the sweeter and spicier side of the Korean palate so other flavors can come through. Coins of poached pollock roe are sliced over a block of soft tofu in a clear, subtle dried-seafood broth. Soy-braised abalone is served in an anchovy broth that is, if not exactly subtle, at least soft-spoken.

Hwaban imports cakes made by a specialist in buttercream decoration.CreditEvan Sung for The New York Times

One of two pork belly dishes on the menu involves ssamjang, the potent soy-chile paste now sold in supermarkets throughout the land, but the other does not. In that one, you eat a slice of simmered pork belly together with a pickled mushroom and a square of cabbage kimchi.

There is, of course, a sharp little kick to the spicy fish stew known as maeun-tang, and a fair amount of chile paste in the daktori-tang, a spin on the classic braised chicken and vegetable dish, both of which Mr. Jang makes very well. But there is also the surprise of tasting ginger and carrots along with the chiles in a bright orange sauce for seared salmon.

Ms. Han and Mr. Kim also own Kosaka, a chiaroscuro lair for omakase sushi on West 13th Street. I was a little put off by how active the servers were there; just as I was focusing on the piece of fish in front of me, somebody would dart in at one elbow or the other to ask how I was enjoying it all.

The service style is similar at Hwaban, but it plays better there. A meal at Hwaban is also about three times less expensive, at $55 for an appetizer and two main courses. The mains are served at the same time, which Ms. Han says is her attempt to reproduce the abundance of Korean family tables like her mother’s.

Her mother also gets credit for the two-sided fritters of minced shrimp pressed against zucchini coins on the short à la carte menu. They’re served with a crisp pair of fried shrimp and little cubes of jelly that melt into dipping sauce on contact with the warm fritters. The same soy jelly accompanies a kimchi-jeon that’s topped with browned mozzarella — in other words, a kimchi pizza. It would fit right in at Smorgasburg.

FacebookshareGoogle+sharePinterestpin it
Front Burner: How to Improve Upon Burrata? Add TruffleWhy Do You Love a L.O.L. Surprise?
Latest