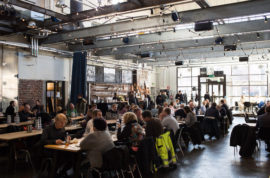 From the whimsical skylights that protrude like reptilian eyes from its new underground art museum to the undulating walls of a new library, Helsinki’s latest attractions are resolutely cutting-edge. So it came as something of a relief, on a recent trip to the Finnish capital, to spot a homely pastry in bakery windows throughout the city. Tube-shaped and topped with a circle of ruby red jam, this is a Runeberg cake, and it’s eaten to commemorate the birthday of Finland’s national poet, Johan Runeberg, who was born on Feb. 5, 1804.

That a poet would get his own national baked good is reason enough, as far as I’m concerned, to recommend Finnish gastronomy. But happily, there are a growing number of other reasons as well. Helsinki has been slower to the Nordic revolution that has turned Copenhagen and Stockholm into global culinary destinations. But the same surge of creativity that has brought the city the Amos Rex contemporary art museum and the architecturally stunning Oodi library has extended to cuisine as well.

“When I first got here about seven years ago, there were a few fine-dining restaurants and a lot of fast food, but nothing in between,” said Barcelona-born Albert Franch Sunyer (he is a co-owner of Restaurant Nolla, which is currently closed as it rebuilds in a new location, slated to open this summer). “But I left to travel for a year in 2015, and when I came back, it was like ‘wow, what happened?’ Suddenly there were all these new kinds of places, and a younger generation of chefs starting their own businesses. Even the customers were different — they were more willing to go out.”

The innovations tend to be of degree — they exalt Finland’s limited but superlative produce and eschew luxury ingredients like shellfish and beef in favor of wild plants and offcuts of proteins — rather than kind. (In the winter, you will see a lot of root vegetables. In the spring and summer, herbs and berries.)

And there’s still some mimicry of Nordic trends from Denmark and Sweden. “Food culture is new here, so it’s difficult not to mirror what you see elsewhere,” said Mr. Franch. “It’s like when you’re a kid, you copy your parents until inevitably, you develop your own identity.” Increasingly in Helsinki, that inevitability is coming into focus.

In 2010, the mostly self-taught chef Sasu Laukkonen opened a tiny neighborhood restaurant called Chef and Sommelier, and quickly turned it into one of Helsinki’s most acclaimed restaurants. Seven years later, he reopened in the same space as Ora, with a menu even more fervently devoted to Finnish ingredients, and a kitchen reconstructed to take advantage of every centimeter of available space.

Ora is still small enough that guests have to time their trips to the restroom so as not to block the servers. But the intimate dining room makes the perfect stage for Mr. Laukkonen. A one-man rebuke to the stereotype of the reticent Finn, he slips back and forth behind a kitchen counter that also serves as a table, plating on the one side and multilingually regaling diners on the other with stories about the Finnish loggers who used to load up on the Arctic turnips he says are like rutabagas, but sweeter; or the seasonal burbot, a chimera-like fish with the head of a catfish, the tail of an eel and a liver that tastes like that of a monkfish.

More on traveling to Helsinki
Five Places to Go in Helsinki 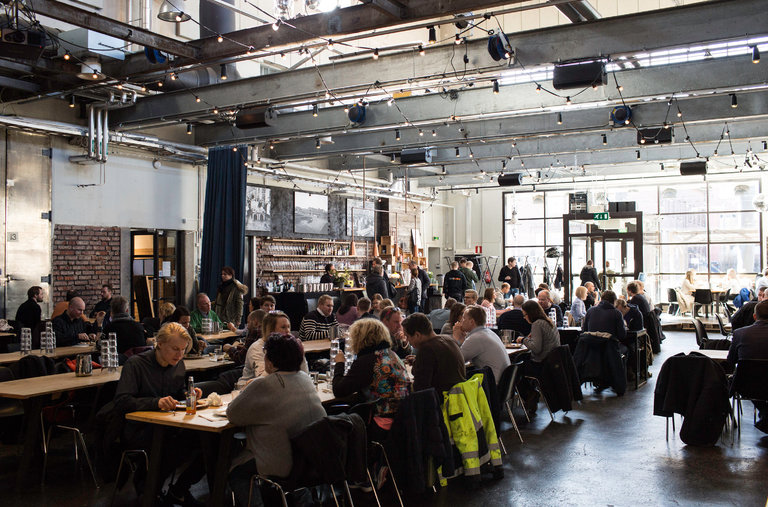 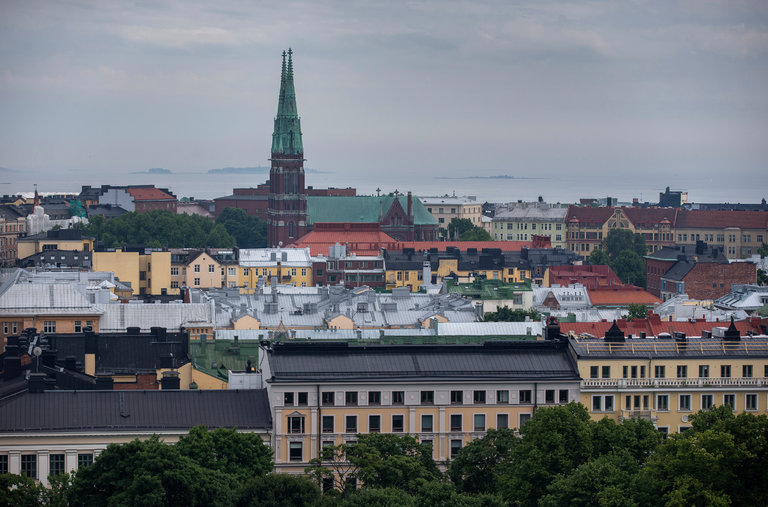 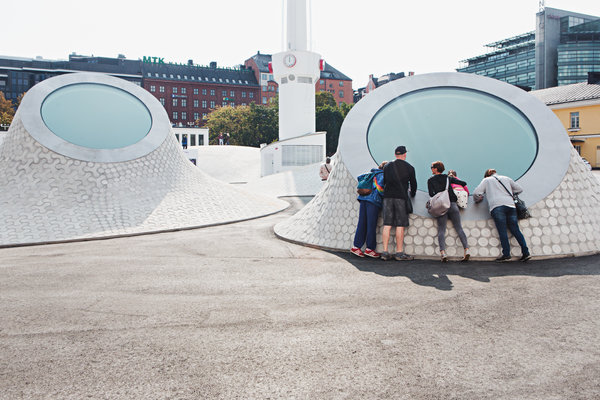 Those products are featured to excellent effect on the six-course tasting menu. Thin slices of Arctic turnip are rolled like golden crepes around a sweetly creamy filling of whitefish, drizzled with dill oil, and topped with scoop of whitefish roe. The opaline burbot, delicate in its buttery sauce, gets an earthy base from local carrots spiced with caraway. A warming dish of celeriac, shaved into pappardelle and slathered in a cream sauce brightened with a foresty pine bark vinegar, is as soothing as a bowl of pasta al limone, but far more interesting.

With the exception of the wines, which generally come from small producers elsewhere in Europe, everything that Ora serves, from a sparkling hard cider the color of spun gold that inaugurates the meal to the rosemary-scented crumble topped with whey ice cream and a disk of local chocolate that ends it, is pristinely, gloriously Finnish.

You wouldn’t expect it upon entering Inari. Physically, the restaurant could hardly be more nondescript: in chilly months, the ground-level windows let in little light, rendering all the plainer the bare walls and unadorned tables. But it hardly matters, because from the first dish, it all turns. Precise wedges of crisp daikon alternate with segments of grapefruit that shimmer in a pool of quince; the sweet, tart and spiciness of the components are melded together by earthy shards of black garlic. Korean tteokbokki — rice cakes with the shape and texture of very al dente gnocchi — bathe in a briny mussel broth that pops thanks to a healthy dollop of salmon roe. Shiitake and enoki mushrooms, strewn among globules of a lightly gelled aspic made from clean-tasting chicken broth, are served cold, invigorated, like many of Inari’s dishes, with a pow of chile oil.

The surprises continue further along the tasting menu: burbot makes an appearance again, swimming this time in a loose turnip foam that hides leaves of seaweed — a decidedly modern take on a classic Finnish stew made with spinach and cream; tender slabs of sweetbreads get a jolt of honeyed tartness from persimmons. For dessert, that most Finnish of fruits, lingonberry, comes to the table as an ice cream dressed in a frill of crisp pastry and red bean paste.

There are no petit fours to finish off the meal, just as there was no bread to start it, and between those ruptures with local custom, and Mr. Mikkola and Ms. Kim’s sometimes startling flavor combinations, it’s no wonder that some Finns don’t quite know what to make of the place. But make no mistake: the cooking at Inari is utterly idiosyncratic — and utterly delicious.

The eight-headed, silk and bamboo dragon by the Chinese artist Ai Weiwei that greets guests is the first clue: the St. George hotel, which opened in May 2018 makes a strong bid to be Helsinki’s most cosmopolitan accommodation. More proof comes in the restaurant one floor below, which is overseen by Mehmet Gurs, the chef of Istanbul’s Mikla restaurant.

With its low lighting, chocolate velvet chairs, and smoky gray walls, Andrea is a sophisticated spot, and at lunchtime its tables fill with fashionably dressed business people. Like Mr. Gurs himself, who is the child of a Turkish father and Swedish-Finnish mother, the menu at Andrea is something of a mash-up. But rather than fusion cuisine, with all the haphazard blending the word implies, Andrea serves highly polished Turkish dishes made with Finnish ingredients.

Or at least mostly. An exception starts the meal in the form of the house-baked bread — instead of a warm pide, it’s a proper sourdough served, in the Nordic way, on a slab of polished tree trunk with freshly churned salted butter on the side. From there, though, the flavors change quickly to the bright, supple tastes of the Mediterranean. The mezze, or small plates meant to be shared, belie their apparent simplicity: from the lush muhammara, a walnut-and-red-pepper paste slicked with fruity olive oil to a chicken salad spiked with kebab spices to a stew of smoky braised eggplant sparked with tomato and tiny, nutty chickpeas.

Mains are built largely around the grill that is the star cooking technique of the Anatolian kitchen, whether a simple skewer of lamb, its edges perfectly charred, its interior still rosy; or a thick curl of octopus, the tentacle glazed sweet and smoky with pomegranate molasses. But throughout, there are hints that we are far from the Bosphorus. That lamb skewer, for example, is served with a dollop of cicek, the traditional herb-flecked yogurt, but instead of fresh cucumbers it’s spiked with very Nordic pickled ones. A starter of perfectly cured salmon, the flesh pink and plush, is beautifully offset by its own pickles — in this case tart green apples — and an emulsion of the same fruit that is like the best apple sauce you’ve ever tasted. A final dusting of sumac transforms it into something far more cosmopolitan than its parts.

In many ways, Grön is an amalgam of every trend to hit the Nordic restaurant scene in the past few years. Here, for example, is the minuscule open kitchen heavily populated with cooks who periodically put down their tweezers to bring out food; there is the tasting menu punctuated with words like “ramson capers” and “fermented.” Natural wines; housemade sourdough; plant-based, seasonal and organic? Check, check and check.

But Grön distinguishes itself as well. Once again, its room is small and bare, with wall-mounted shelves serving as spice storage, and not in a decorative way. But the service, whether from one of two dedicated servers or from a chef, is warm and knowledgeable, and the atmosphere is much more relaxed, friendly bistro than cold, serious temple of dining.

And for a Nordic, the chef Toni Kostian takes an unusually maximalist approach to cooking. That sourdough (which is exemplary — the restaurant has its own bakery across town) comes to the table not only with butter, but with little pots of spiced pumpkin seeds, and sweet cicely-flavored salt as well. A perfect potato rosti, the exterior golden and crunchy, the interior pale and creamy, is topped with buttery oyster mushrooms, dusted in dried reindeer powder, and served with fresh baby sorrel and a sour cream that turns it into the Finnish latke of your dreams. A dense almond cake, piped with spruce-scented Swiss meringue and set aflame tableside, is irresistible on its own, and even more so with the puckery preserved blueberry compote that accompanies it.

Not everything works — a savory tart filled with roasted and raw yellow beets, lovage pesto, Swedish Vasterbotten cheese, celeriac and pickled horseradish flowers suffers from a few too many ingredients, and the gelatinous texture of glazed cod tongues is not enhanced by equally slippery braised cabbage. But an evening at Grön is still filled with convivial discoveries, and by the time a chef sends you off into the snowy night with a warm cannelé, the crisp pastry redolent with the scent of woodruff, the sense of well-being is pronounced. Even poetic.

FacebookshareGoogle+sharePinterestpin it
Vows: It Was ‘Like We Were in Love in Another Life’Tobacco and E-Cigarette Lobbyists Circle as F.D.A. Chief Exits
Latest