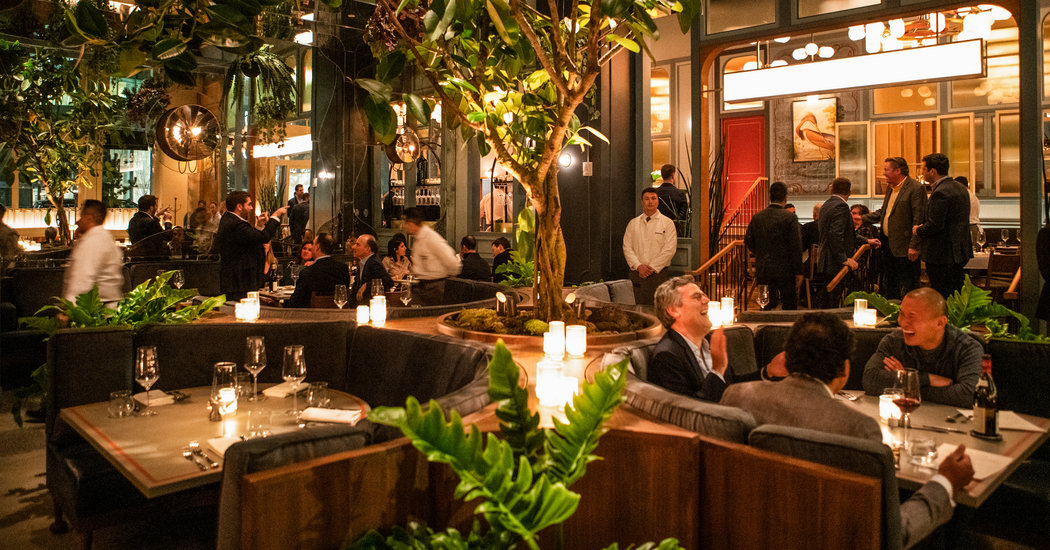 Bistro is a rather modest description for a grand installation that includes a warmly outfitted bar area with 30 seats; a cooler, plant-filled conservatory-style dining room with zinc-topped tables and plush seating; another, brighter dining room up a few steps; and an airy private dining room beyond. It’s owned by Michael Stillman, who now runs Quality Branded. Designed by AvroKO, the space housed Sirio Maccioni’s Osteria del Circo but has expanded to seat 180. The chef, Antonio Mora, worked at the Ryland Inn, Daniel, for Keith McNally, and at the Brooklyn restaurants owned by Frank Castronovo and Frank Falcinelli. His menu hews pretty closely to what you would consider bistro fare, though sometimes with a twist, like an Alsatian tarte flambée squared off like Detroit-style pizza. Expect French onion soup, escargots, steak frites, Dover sole meunière finished tableside, a pork porterhouse, tuna tartine and profiteroles.

Rahim and Mohammed Diallo, who immigrated from Guinea, have brought ginjan, a traditional West African drink made from ginger juice, into the spotlight at this cafe, which also serves coffees, tea, pastries and crepes.

The inspiration for this new Indian restaurant is the Famous Curry Bazaar in London. That’s where the chef, Abdul Jabber, once worked and where he learned to make the assorted curries he will prepare at this restaurant. The menu also includes some tandoori specialties, street-food items and vegan dishes, served in a cozy dining room with decorative touches like Bollywood posters. The owners, Linda Mahkovec and Ruhel Amin, are experienced New York restaurateurs who have opened other small restaurants.

This Bronx beacon for Southern food closed after problems with the gas lines in the Grand Concourse building it occupies. The restaurant is likely to be closed for a year, and, until it can reopen, Millie Peartree, the owner, is organizing pop-ups elsewhere. The first, in Manhattan, at the Shakespeare in the William Hotel in Murray Hill, will be on Sunday, starting at 4 p.m., and the menu will nod to the Super Bowl that evening with items like barbecue jerk chicken wings. She’ll return to the Shakespeare on Feb. 16 and 23, and will also be cooking in Littleton, N.H., on Feb. 9, and on Feb. 14, at the Tillary Hotel in Brooklyn.

This izakaya installed next to the Japan Village market will serve a quick-service lunch with several set menus. It plans to offer tapas-style dinners in the spring.

A sushi omakase restaurant is moving into the former Amato Opera House space. The fish and rice experts behind the menu are Mark Garcia, who was at Gaijin in Astoria, Queens, and Evan Zagha, who was at Brushstroke. Mr. Garcia will be doing the sushi, and Mr. Zagha will be in charge of the composed plates that will be part of a 16-dish tasting ($160). The restaurant will seat 26. (Opens Wednesday)

Mediterranean and Middle Eastern fare focusing on Greece and Italy is the specialty at this relocated spot. Originally on Bleecker Street in the West Village, it closed last spring and is now in the theater district.

The 33,500-square-foot space at the edge of Chinatown that once housed First National City Bank of New York is getting a new tenant: a multilevel food complex. So far, plans for the complex, to open by year’s end, include an international grocer called Drogheria featuring several vendors on the ground floor and other shops, for general goods, on the second floor. A tea parlor, a cafe emphasizing wellness and a small brewery are planned for the second-floor mezzanine. A private club, Pax Romana, with a restaurant, lounge and work space is also being developed, as are a roof garden and outdoor cinema. Michael A. Spalding, who was in the hospitality business, is in charge, along with associates who have experience with many luxury, culinary and lifestyle brands.

This high-profile chef, who established a significant presence in New York with the opening of Mercado Little Spain in the Hudson Yards development, will be expanding his toqueprint. Late next year, he will open two restaurants and create the food for a couple of bars and lounges at a new Ritz-Carlton hotel under construction in NoMad. His company, ThinkFoodGroup, will also handle room service and catering for the hotel. The themes and size of the restaurants have not been determined.

Ms. Patinkin, one of the founders and chief executives of Ovenly, the 10-year-old Brooklyn-based bakery, has stepped down and has turned the reins over to the co-founder and chief executive, Agatha Kulaga. Ms. Patinkin said she expected to spend more time helping other start-up food companies to get established and grow.

This chef whose restaurant, Mirazur, on the French Riviera, has three Michelin stars and was No. 1 on the World’s 50 Best Restaurants 2019 list, will be in New York for a few days to cook special dinners in honor of Fashion Week. Two of the nine-course dinners will be open to the public: $650 plus tax and tip, and $175 for wine pairings, at Spring Place, a downtown club with studios and work spaces.

Michelin announced its 2020 star ratings for France on Monday, prompting an uproar when L’Auberge du Pont de Collonges, often simply called Paul Bocuse for its longtime chef and owner, was demoted from three stars, which it received in 1965, to two.

The Bocuse family issued a statement, saying, in part, that they were upset by the judgment on the restaurant, in a suburb of Lyon, and that “there is one thing we never want to lose, and that is the soul of Paul.” Mr. Bocuse, one of France’s greatest chefs, died in 2018.

This year’s guide lists 29 three-star restaurants, 10 of them in Paris. Among the surprises was L’Oustau de Baumanière in Les Baux de Provence, which regained its third star, after losing it in 1990. Kei, in central Paris, and Christopher Coutanceau, in La Rochelle on the Atlantic coast, were elevated to the three-star level for the first time. In the two-star category, there are 86 restaurants, including 11 new ones, with Le Taillevent in Paris awarded a second star. The restaurant had three stars for 34 years but was demoted to two, then one in 2007. L’Atelier de Joël Robuchon at the Étoile also regained its second star, having dropped to one.

There are 513 one-star restaurants in the guide, of which 49 are new.