Q&A: Billy Eichner Has Never Been to Paris 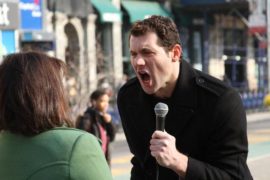 Those who correctly identify the names of three of the seven dwarves in “Snow White” or the person whose photograph Sinead O’Connor ripped up on “Saturday Night Live” win trinkets. Those who fail are subject to withering attacks by Mr. Eichner.

The show, which is produced by Will Ferrell’s production company Funny or Die, debuted on Fuse in 2011, then moved to Tru TV in 2015. (It became a web series this fall, sponsored by Lyft.) In 2015, Mr. Eichner starred with his friend Julie Klausner on the Hulu show “Difficult People,” with the two playing a pair of struggling comics. More recently, he appeared in Ryan Murphy’s “American Horror Story: Apocalypse,” which just finished its run on F/X. 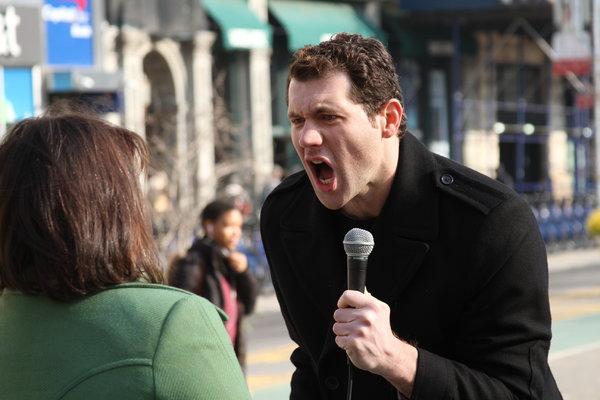 Billy Eichner in action on «Billy on the Street,» a show that earned him two Emmy nominations and that came back as a web series this fall.CreditJoey Bergren

If only a New Year’s trip to Rio de Janeiro had met his expectations. “The truth of the matter is that it’s a big gay destination at that time of year,” he said. “So you fly 12 hours and then you look up on the beach and it’s a guy you saw at Equinox in West Hollywood.”

Here are some of his other observations about life away from home.

What kind of traveler are you?

I go on mini-long weekends throughout the year, but a week-to-10-day getaway usually only happens at the end of the year, when I’m exhausted and I just want to sit on a beach and be lazy and drink. Although this Christmas I’m trying to get some culture back in my life and I’m going to Paris and then London. I’ve actually never been to Paris, if you can believe it. So there’ll be museums, there’ll be fine dining. And there’ll be some shows in London. I want to see “Company.” I want to see “The Inheritance,” which is the big epic gay play.

On the plane do you sleep? Watch movies? Read books?

I have a hard time sleeping on planes for long periods of time. Once in a great while, I’ll watch a movie but it’s very rare. I usually use the flight as an opportunity to work, write, catch up on emails, or scroll Twitter. For hours at a time.

So you use Wi-Fi?

Always. My most recent flight from New York to L.A. last week, the Wi-Fi stopped working 20 minutes into the flight and never started up again. That drove me crazy. I don’t deal well with turbulence. If I can be on Twitter or Instagram and somehow be connected to people on the ground, that helps me not focus on the turbulence of the plane. I know this sounds crazy.

Although Mr. Eichner travels a lot, he says he never uses Airbnb. «I don’t think it will ever match what the photos look like.» he said. «It’s like a Tinder date.»CreditCindy Ord/Getty Images For Teen Vogue

Do you have a favorite hotel? Or are you an Airbnb guy?

I do not use Airbnb. I am scared of Airbnb because I don’t think it will ever match what the photos look like. It’s like a Tinder date. In terms of hotels, I really like the London in West Hollywood. If you’re splurging or someone’s paying for it, you can’t beat the Four Seasons. I want it to remain a secret, but there’s a hotel in Puerto Vallarta that I’ve been to a couple of times called the Hotel Mousai. Last year, I brought like 20 people with me over Christmas break and we had a fantastic time. It has the greatest pool I’ve ever been to in my life.

I always check. I could be going on a 20-minute helicopter flight. I still check.

What have been some of your favorite spots?

I really do love Provincetown. If I could spend the whole summer in P-town like John Waters or someone like that, I would.

I’m really under-traveled. So I still need to go to Italy (I know, I know) and Tokyo. Those are at the top of my list. Australia at some point too, but it’s so far.