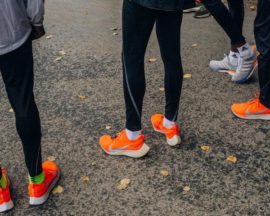 The distinctive and controversial Nike Vaporfly 4% running shoe is supposed to improve running ease and speed by as much as 4 percent, as its name suggests. Two new laboratory studies of the shoes suggest that those claims are credible.

The new studies, which were not funded by Nike, find that wearing the shoes makes runners more efficient than wearing other shoes, although probably not for the reasons that many runners might expect. Together, the experiments help to explain what can make one runner swifter than another and also raise interesting questions about whether it is cheating if part of the answer is their shoes.

Since its introduction about a year ago as an aspect of Nike’s ambitious project to breach the two-hour barrier for the men’s marathon, the neon-salmon hued Vaporfly 4% has become a common sight at major road races, despite its hefty $250 price.

They were on the feet of Eliud Kipchoge and Abraham Kiptum when the men set world records this year in, respectively, the marathon and half-marathon. 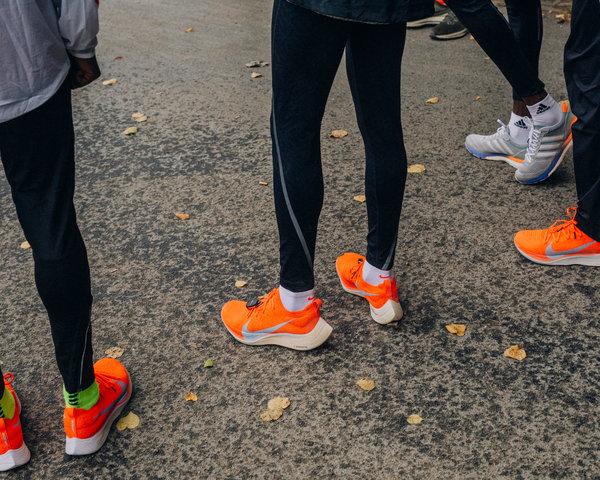 Eliud Kipchoge and fellow runners train in Tiergarten in Berlin in the week leading up to the marathon.CreditMustafah Abdulaziz for The New York Times

The shoes, which contain a curved, carbon-fiber plate embedded in a thick layer of a unique, lightweight foam, gained their name and reputation after research, funded by Nike, showed that they improved experienced male runners’ metabolic efficiency by about 4 percent. In other words, the men used less energy to run at a given pace, which should allow them to run faster with less effort.

Those results were met with calls from some people to ban the shoes, since the carbon-fiber plate was thought to be acting like a spring, creating extra propulsion and an unfair advantage compared to other shoes.

But that original research had not examined just how the shoes improved efficiency or whether the plate was the key element. They also had not included women runners or compared the 4% models to more-specialized racing shoes, such as spiked, speedy racing flats.

The two new studies set out to fill those gaps.

The first, which was published in October in Sports Medicine, involved both male and female runners, all of them experienced competitors. It was paid for by grants at Grand Valley State University. The researchers asked these runners to wear the 4% shoe, a minimalist, spiked track-racing flat (also made by Nike) and a different marathon running shoe (made by Adidas). The runners then strode on a treadmill for five minutes at a time, at speeds ranging from about 5.5 minutes per mile to about 7 minutes per mile, a pace that represented easy running for this group.

Throughout, the volunteers wore masks that tracked their oxygen consumption, which is one measure of efficiency.

They turned out to be most efficient in the 4% shoe, even when compared to the skinny track spikes and even after the researchers used lead pellets to add weight to the 4% shoe so that its mass equaled that of the other, slightly heavier marathon shoe.

The men and women had benefited equally from the 4% shoe and their efficiency gains had been unrelated, it seems, to that shoe’s featherweight.

But which elements of the 4% shoe did, then, most matter was still unclear.

So for the other new study, which was published in November in Sports Medicine, the same researchers from the University of Colorado at Boulder who had conducted the original study of the shoe invited 10 fast, male runners to their lab, fitted them with motion-capture sensors, and filmed them as they wore the 4% shoe, a different Nike marathon shoe, and a similar Adidas model. (The work was paid for through the lab.)

They also employed specialized equipment to bend and manipulate the shoes, to see how they responded to forces and which portions of the shoes were most affected.

Finally, they used the motion-capture data and complicated mathematical formulas to determine that the 4% shoe had slightly changed how the men ran, reducing the amount of muscular activity around their ankles and within their feet, lessening the amount of energy they burned with each step and making them more efficient.

But those benefits were not due primarily to the carbon-fiber plate, their calculations showed. It stiffened and supported parts of the foot, allowing runners to push off hard with less muscular effort, but did not provide much thrust of its own. In effect, it acted like a lever, not a spring, says Rodger Kram, an emeritus professor at the University of Colorado who conducted the study with a research associate, Wouter Hoogkamer, and others.

That finding might seem abstruse but is important for discussions of banning the shoe, Dr. Kram says. Some people consider springs to be an unfair advantage, but few seem to feel the same way about levers.

There also are no calls to ban the particular type of foam used in the shoes, although it was the most consequential element of the shoes, the new study showed. Lightweight and soft without being squishy, it absorbed and returned a portion of the energy the men generated with each step, doing more than the plate to reduce the energy costs of their running.

Whether shoes with the same foam but no carbon-fiber plate would be as fast is still in question, Dr. Kram says, although they almost certainly would be less pricey.

There also is little evidence yet that the shoes can substantially improve the efficiency and pace of those of us who are older, slower or inexperienced runners, although we can, of course, dream.

“The shoes might help” to shave a minute or five from a plodding runner’s 10K or half-marathon finishing time, Dr. Kram says. But, realistically, he says, “many people will get much more than a 4 percent improvement from more training and maybe a little weight loss.”

FacebookshareGoogle+sharePinterestpin it
NO Regrets: Strutting the Red Carpet and Worrying About Climate ChangeJames Duke, 88, Globe-Trotting Authority on Healing Plants, Is Dead
Latest