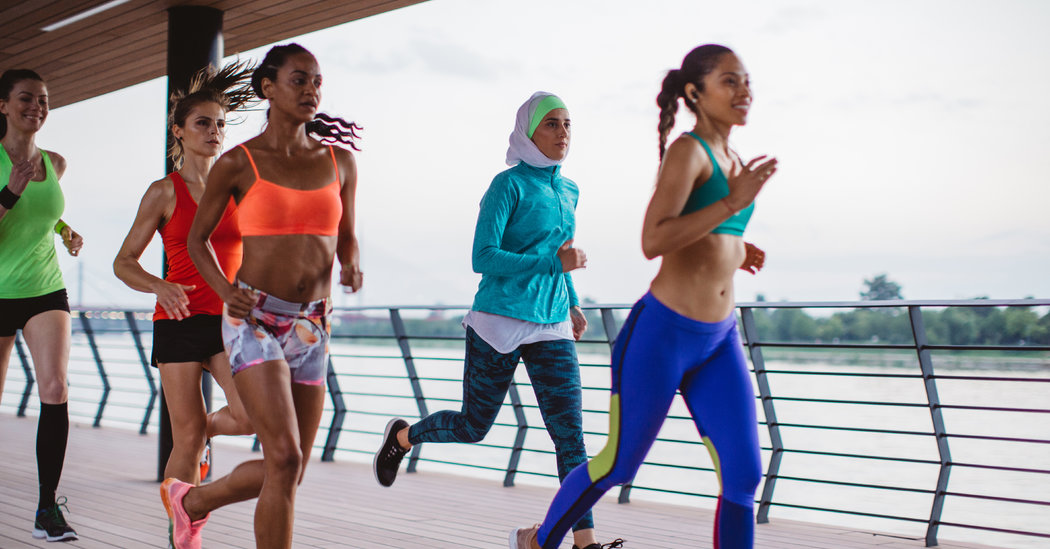 Breast size can affect how women exercise and whether they decide to work out at all, according to a large-scale new study of the exercise habits of women of all ages. The study suggests that physical concerns, including breast size and bra fit, should be openly and frankly discussed during considerations of what keeps people from being active.

Nobody doubts at this point that exercise can improve our health, happiness and longevity. But a hefty percentage of adults across the globe rarely if ever move.

The reasons so many people remain so sedentary are numerous and complex, studies show, ranging from jammed schedules to unwalkable neighborhoods. But another common obstacle, according to survey responses, is discomfort during exercise.

For many women, that discomfort involves their chests. Female breast tissue is heavy and unsupported, containing little stabilizing, connective tissue. So, breasts move when women exercise, even if they wear a bra.

Past biomechanical studies show that when women run braless, their breasts joggle up and down by seven inches or more and also oscillate side to side. Sports bras may attenuate this jostling but rarely eliminate it, even in women with small breasts.

As a result, breasts often become painful during and after workouts. A 2013 questionnaire provided to women running the London Marathon found that more than a third of them, including runners with small breasts, told the researchers that their breasts often felt sore.

But little past research has explored whether breast size and potential soreness affect women’s decisions to participate in exercise or if they influence the kinds of exercise that women might — or might not — pursue.

So, for the new study, which was published this month in the Journal of Science and Medicine in Sports, researchers from the Biomechanics Research Laboratory at the University of Wollongong in Australia advertised for women willing to have their breasts measured and discussed. The researchers recruited only women because, obviously, women possess female breasts.

(Men have their own morphological challenges related to exercise, with male genitalia vulnerable to numbing bicycle seats and errant soccer balls. But those issues are not known to limit men’s willingness to be active.)

Eventually, the researchers wound up with a group of 355 generally healthy women ranging in age from 18 to 75. Their body mass ranged from normal through obese.

They asked these volunteers to complete several questionnaires, one of which asked the women to recall whether and how they had exercised in the past week. Had they, for instance, gone for a walk, for how long and at what intensity? Had their breathing sped up? Had they broken a sweat? Similarly, had they jogged, swum, biked, completed yard work, attended dance classes or engaged in other activities?

A separate questionnaire asked whether the women felt that their breast size had influenced how they exercised.

The researchers then used three-dimensional scanning to precisely measure the volume of each woman’s breasts and categorize them as small, medium, large or very large. (The scientists did not rely on bra size, because it is notoriously inconsistent.)

Then they compared exercise habits among the groups.

The results were consistent and rather worrying. As women’s breast sizes grew, their participation in physical activity declined, particularly if that exercise was vigorous. Few very-large-breasted women jogged, for example.

Many of the larger-breasted women also reported that they believed that their breast size prevented them from exercising easily, even in low-impact activities like walking or swimming.

These results remained the same when the researchers considered age, which affects exercise participation, and body mass index, which likewise affects how often we exercise. Over all, slimmer women tended to have smaller breasts and vice versa. But even among overweight women with small breasts and normal-weight women with large bosoms, the relationship to exercise was unchanged.

Women with larger breasts, whatever their B.M.I., exercised less on average than those with smaller ones and were more likely to feel that their breast size interfered with moving.

The upshot is that women should be encouraged to learn how to find and fit a high-quality sports bra or swimsuit with adequate breast support, says Celeste Coltman, now an assistant professor at the University of Canberra in Australia, who led the study as part of her doctoral dissertation.

She and her collaborators, Julie Steele and Deirdre McGhee, professors at the University of Wollongong who also lead Breast Research Australia (BRA), a research initiative at the university that looks at how breast size affects lifestyle, have developed a free app to help active women assess their breast size and bra needs. (The bra sizing is Australian but the sizing tips are universal.)

Some large-breasted women may need to wear two bras simultaneously to gain enough support for comfortable running and high-impact activities, Dr. Coltman and her collaborators say.

Dr. Coltman also suggests that large-breasted women who have not been exercising consider trying low-impact activities like walking and, perhaps even better, swimming, if they can find a comfortable swimsuit with a built-in bra.

“Swimming and other water-based activities like aqua aerobics can be ideal,” she says, “because the buoyant forces of the water slow the downward movement of breasts” and dampen any breast-related discomfort.