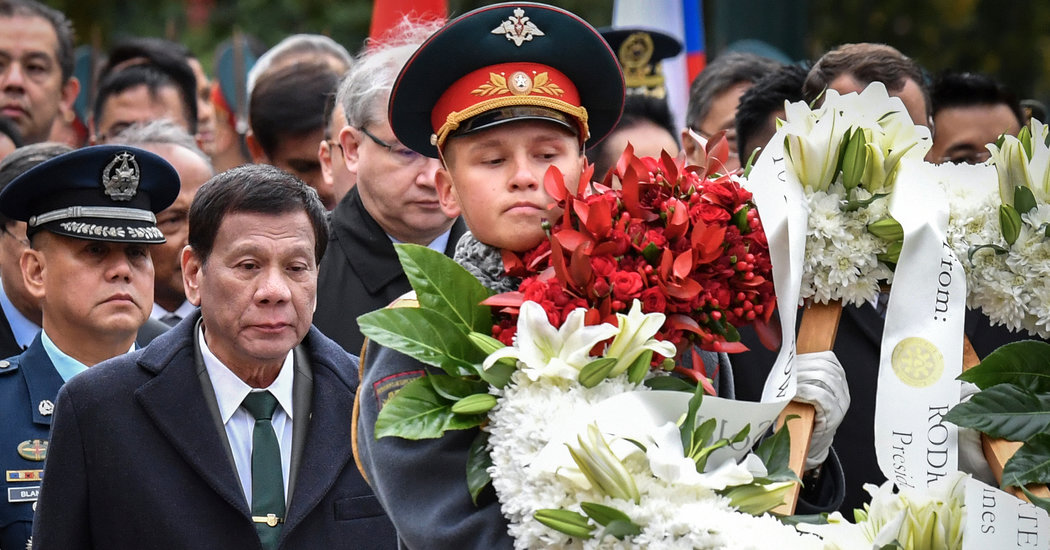 MANILA — President Rodrigo Duterte of the Philippines has revealed that he has a neuromuscular disease that has led to a slew of medical problems, including making his eye droop.

Mr. Duterte, who was in Russia for a state visit, told the Filipino community there on Saturday night that he has myasthenia gravis, a chronic autoimmune disease that leads to skeletal muscle weakness. He said the disease ran in his family.

The revelation came amid continued public speculation about his health. There have been periods when the famously bombastic president has been out of the public eye for days, prompting headlines guessing about his whereabouts, and even rumors of his death.

But his communications officers have said that Mr. Duterte, 74, like any other older person, needs his own personal time.

The president revealed the ailment after he apparently made a joke about not being able to look straight at a woman with whom he had danced a duet during the event in Moscow.

“I have a talent,” Mr. Duterte said, according to official transcripts provided by his office afterward. “When I look at you, my other eye droops. Do you see? The other eye is smaller. It goes where it wants.”

Mr. Duterte said his grandfather had also had the disease, adding, “So I believe, really, in genetics.”

The disease often affects the muscles that control the eyes, facial expression, speaking and swallowing, according to the Philippine Medical Association.

Mr. Duterte came to power in 2016 vowing to rid the country of drug dealers and to wipe out other crimes. Since then, the Philippines’ war on drugs has led to thousands of killings allegedly by the police and vigilantes, which rights groups have denounced as an atrocity.

One image showed him with the latest issue of a newspaper, suggesting an effort to prove that the picture had been taken on the same day.

Last year, Mr. Duterte revealed that he had undergone an endoscopy and colonoscopy and that doctors had found he had, he said, “a bad case of Barret.”

He was referring to Barrett’s esophagus, a complication of gastroesophageal reflux disease, or GERD, in which the contents of the stomach flow backward into the esophagus.

The president has also said he has Buerger’s disease, which leads to constriction of blood vessels in the arms and legs.

FacebookshareGoogle+sharePinterestpin it
Jimmy Carter Needed Stitches After Falling at His HomeAddicted to Screens? That’s Really a You Problem
Latest