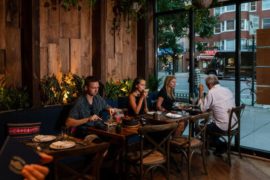 Four summers ago, a young chef named José Luis Chávez began leveraging the poke craze and the salad-bowl trend into a string of fast-casual ceviche bars. He began with a counter in the Gansevoort Market food hall called Mission Ceviche; there is now another in Canal Street Market and a third is supposed to open in Norwalk, Conn., later this year. At all locations, the stock-in-trade is citrus-marinated raw fish with sweet potatoes and kernels of chubby Andean corn, in both its soft and crunchy forms.

This is of course the standard Peruvian formula, but Mr. Chávez had the inspiration of serving his ceviche in a clear plastic bowl over a base of salad, rice or, for a dollar more, quinoa. The supplemental ingredients make a plausible desk lunch out of a dish that some New Yorkers still aren’t quite sure what to do with.

The surprising thing about Mission Ceviche’s salad bowls is that they taste like real Peruvian food. The raw fish is firm and cold and neatly cut up into solid pieces that hold their shape. The leche de tigre marinade in Mr. Chávez’s “ceviche clásico” is a bright and precise cocktail of lime and rocoto chiles, although you might wish that the rocotos had been applied with a little less restraint.

You get a higher-caliber shot of spice, this time from ají amarillo chiles, in the ceviche mixto, a combination of octopus, shrimp and fluke enveloped in a creamy, goldenrod-colored leche de tigre. The clásico is accessorized with sweet potato purée; the mixto gets avocado purée, too. The purées are piped out of pastry bags like buttercream roses on a wedding cake, and they are delicious.

When I wandered into the Gansevoort Market location in February, it seemed clear that Mr. Chávez could run an interesting restaurant if he ever decided to put his food into something other than recyclable salad bowls. Then, at the beginning of the summer, he did just that, opening a sit-down restaurant on the Upper East Side with real plates and bowls.

The new space is not particularly large or lavish, but compared with the earlier efforts, Mission Ceviche Restaurant & Bar is a palace. There is seating for 65 or so people beneath a wall sculpture of a fish that glows from behind and a pink neon sign that reads “tiger milk effect,” probably a reference to the belief that drinking leftover leche de tigre can put extra topspin on sexual performance.

The menu now paints a slightly fuller picture of Peruvian cuisine, extending into new foods including the grilled skewers known as anticuchos. Mr. Chávez dresses up the country’s most popular anticucho, grilled beef heart, brushing it with a creamy rocoto sauce and serving it with newly fried blue potato chips and kernels of choclo corn. The trio of rocoto, blue potatoes and choclo is so solidly Peruvian that it can withstand the chimichurri that Mr. Chávez brings in, by way of Argentina, as a final touch. He clearly has a soft spot for chimichurri because he deploys it again with the shrimp anticuchos (the shrimp are very big and look even bigger because they’re grilled with their heads on), served with a squirt of huancaína, the spicy yellow cheese sauce that is something like Peru’s version of queso dip.

My favorite anticucho is a more straightforward situation, grilled scallops under arugula, lime zest and a smooth Parmesan fondue. But Mr. Chávez has the ability to put several flavors in motion at once and keep his balance, as evidenced by the beef-heart skewer and his octopus causa. This is, reduced to bare bones, a tendril of octopus curled around a disc of mashed potatoes. But the potatoes, seasoned with lime and yellow chiles, are coated in a smooth lavender-colored sauce made from Peruvian black olives; the octopus has been rubbed with cumin, oregano and ají panca paste and grilled to a crackle; the plate is decorated with a few wobbly curls of paper made with purple Peruvian potatoes.

Mission Ceviche’s servers, while eager to be helpful, have a habit of singling out the most obvious dishes — the classic ceviche, the octopus leg — and pushing them so hard you might suspect the rest of the menu is a minefield. It isn’t. There is nothing to avoid unless the kitchen brings back the bizarre strawberry-kiwi ceviche that showed up as a special one night.

If you are being herded into getting the “Peruvian paella,” you should know that the other three main courses are also worth looking into, like the ají de gallina, shredded chicken breast in a creamy ají amarillo sauce that is both soothing and spicy; or the seco norteño, a slowly braised short rib in cilantro sauce. All are larger than average, too.

Still, nothing on the menu quite rivals the ceviches. They are served, yes, without lettuce or rice, and they are better for it. Mr. Chávez’s creative engine seems to have a high idle, and he has come up with different ways to present dishes that are also on the menu at the fast-casual counters. The “Nikkei” ceviche, for instance — tuna in a kind of modified ponzu sauce seasoned with ají amarilllo and togarashi — now comes with watermelon and a bloop of ginger foam that would never survive a trip from the food court back to the office. Neither would the odd but intriguing attempt at a vegetarian ceviche where the fish is replaced by shiitakes and the leche de tigre takes the form of snow, frozen by liquid nitrogen.

The art of ceviche-making has at least as much in common with mixology as with cooking, so it is no surprise that the cocktails are well calibrated and sing out with fresh lime. There is a twist on the pisco sour made with passion-fruit juice and another with the purple-corn drink chicha morada, although neither quite achieves the bracing elegance of the original. And it’s nice to see the less well-known chilcano, a pisco highball made with lime juice and ginger ale. (Would ginger beer be better?)

Chicha morada appears again in the raspadilla dessert. This time it is a syrup poured over shaved ice and sprinkled with lucuma foam. When I had the raspadilla, it was sprinkled with candied pecan crumbs but in a phone interview on Monday Mr. Chávez said he had replaced the nuts with crumbled Oreos. This, it hardly needs pointing out, was not exactly a staple in the diet of the Incas.

FacebookshareGoogle+sharePinterestpin it
Want to Do Business in Silicon Valley? Better Act NicePress B3 to Be Mine (With a Vending-Machine Engagement Ring)
Latest