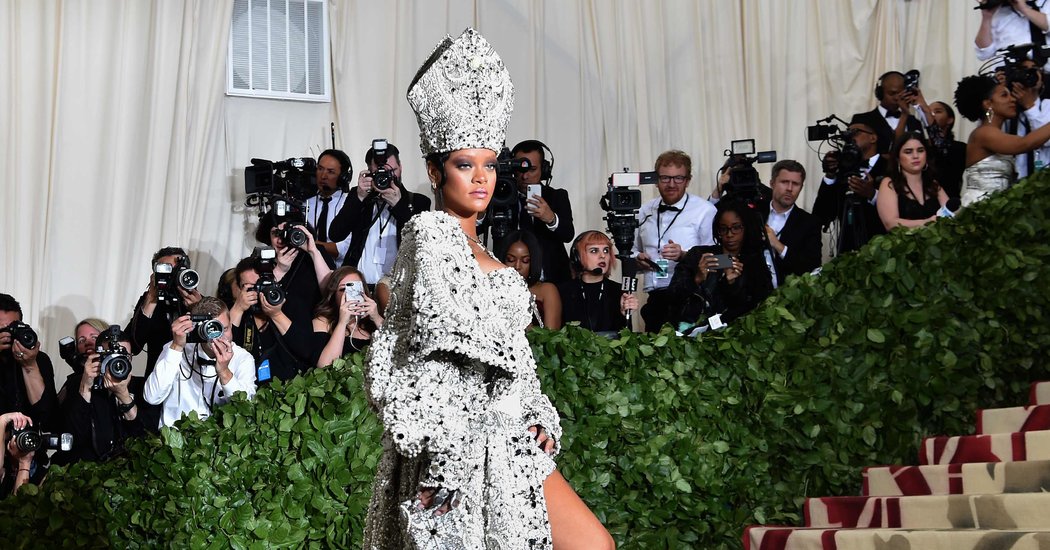 And then there’s a different slice of history: Consider the all-but-ubiquitous pearl necklaces and stud earrings of 1950s feminine America (calling Betty Draper).

But when Rihanna hit the red carpet of the 2018 Met Gala, covered in pearls from the miter on her head to the matching circlets around her ankles, the marine-born gem took on a subversive air that underscored its appeal to contemporary jewelry designers.

“Why are there so many pearls? Well, it is thanks to us,” Toshikazu Tajima, the chief executive of Tasaki, said earlier this year when the Japanese pearl house opened its first European flagship, on New Bond Street in London.

He was joking, but he had a point. After directing Japanese sales for Gucci and Christian Dior and serving as president and chief executive of Fendi Japan, Mr. Tajima joined Tasaki in 2009 and quickly instilled a European approach to reinvention — and desire — into the business. It seems to be paying off, with annual revenues at 26 billion Japanese yen ($239 million) during the company’s fiscal year that ended Oct. 31, 2018. That was 5 percent more than the previous fiscal year.

Mr. Tajima said the appointment of a fashion designer to the house’s creative position was key to repositioning Tasaki as a reference in edgy pearl design.

In 2012, the house introduced M/G Tasaki, a collaboration with the London-based designer Melanie Georgacopoulos. Her outré designs — in which pearls are sliced, caged and coated in gold or diamonds — are an effort, Ms. Georgacopoulos said in an interview, to examine their inherent contradictions of “youthful purity and age-old wisdom, subtlety and perseverance, life and death.” She also has knitted pearls into large asymmetrical bibs.

Creations by both Mr. Panichgul and Ms. Georgacopoulos continue to be sold on the company website, but Prabal Gurung took up the creative director role last year, presenting his first Tasaki collection at his own fall 2018 show during New York Fashion Week. Among the standouts from the Nepalese-American designer: twisting earrings in which a pearl could be worn on the lobe or lifted up to nestle in the ear cavity. Another, an ear cuff named Waterfall, dangled a large gold-hued pearl at the top of the ear while, at the bottom, a cascade of smaller pearls almost grazed the shoulder.

To supply all those pieces, the company farms its own Akoya pearls in the Kujukushima islands off Japan’s southwest coast, not far from Nagasaki. In the last century, the area has become Tasaki’s farming center of the coveted Akoya, a 3 millimeter to 10 millimeter cultured pearl, with popular colors ranging from milky white to creamy rose.

Until Kokichi Mikimoto patented his technique of culturing spherical pearls in 1908, “pearls were accidents, and the finding of one was luck,” John Steinbeck wrote in his 1947 novel “The Pearl.”

A common belief, also found in Steinbeck’s book, is that a grain of sand or something similar finds its way inside an oyster and becomes the nucleus of a natural pearl.

But Laurent Cartier, a lecturer and researcher on gemstones at the University of Lausanne and a member of the Swiss Gemmological Institute (but no relation to the founder of the jewelry house), said a natural pearl actually does not have a nucleus.

Instead, he continued, those round milky-white accidents happen when cells of the mantle membrane inside an oyster’s shell are somehow dislodged. The cells multiply and grow, as they are meant to do, but rather than adding to the existing shell, they form a pearl sac that releases a calcium carbonate substance called nacre.

For as long as six years, and sometimes longer, thousands of layers of nacre build up until a pearl is formed.

In 1893 Mr. Mikimoto began trying to help Mother Nature, eventually wrapping a nucleus of mother-of-pearl in some mantle tissue and placing the combination in an Akoya oyster. The result, after some experimentation, was a perfectly round, cultured pearl.

The Mikimoto technique now is used to farm all sorts of pearls: the freshwater pearls mainly produced in China; the so-called black pearls of gray, green and eggplant hues from the Pinctada Margaritifera oysters in Tahiti; and the Pinctada maxima, which can produce a pearl as large as 20 millimeters, or an eighth of an inch, in diameter.

Pearls represented 3 percent to 4 percent of the $100 billion in global jewelry sales in 2018, said Sarah Willersdorf, a partner and managing director at Boston Consulting Group — which would set pearl jewelry sales at $3 billion to $4 billion that year.

After all, Lauren Santo Domingo, co-founder and chief brand officer at Moda Operandi, wrote in an email, pearls “offer an understated but no less interesting alternative” for women who do not feel comfortable wearing diamonds or other gems.

“There is something effortless about pearls,” she wrote.

In the last couple of years, jewelry makers have highlighted a wide variety of designs, and of pearls.

The Rome-based designer Delfina Delettrez Fendi wrote in an email that she likes to give the pearl “the illusion of being magically suspended on the body, as a magic trick” — so she hung cultured pearls from ultrathin gold chains for a geometric design that she used in earrings and necklaces. A similar effect was achieved by Katherine Kim of Los Angeles, designer of the Katkim line, who created fresh water pearl earrings that embrace the lobe or cuff the upper part of the wearer’s ear.

In Munich, Hemmerle used an old Austrian technique to drill pink seed pearls and then knit them onto a round silk base, completing the earrings with diamond-studded clasps. And the Brazilian jeweler Ara Vartanian paired large South Sea cultured pearls with inverted black diamonds in his double rings, while the Los Angeles-based Spinelli Kilcollin brand split a Tahitian pearl and a South Sea pearl, then reunited the mismatched halves in 18-karat yellow gold circlets, for its Galina MX drop earrings.

Tahitian pearls also were the focus of Lucia Silvestri, the longtime creative director at Bulgari — who wrote in an email: “I can’t live without pearls. ” For the house’s recent Wild Pop collection, she arranged six round Tahitian pearls next to geometric figures inlaid with mother-of-pearl and diamonds to create a crescent-shaped brooch of 18-karat rose gold that bears the name of Andy Warhol and was inspired by one of his sketches.

And for a cuff in the Les Galaxies de Cartier high jewelry collection, introduced in January, five strands of cultured Tahitian pearls were captured by a futuristic white gold structure, the arrangement meant to represent the aligned planets of the cosmos. “Because of their nuances of color, because of their textures, pearls add a special light to jewelry,” said Pierre Rainero, Cartier director of image and heritage.

Both Sophie Bille Brahe of Denmark and Mizuki Goltz of New York use a lot of pearls in their work, with Ms. Goltz comparing the production of a pearl to a woman bearing a child.

Ms. Willersdorf, the consulting group partner, said all the newfound creativity focused on the pearl, along with celebrity endorsements and trade association efforts, have helped pearls reclaim the spotlight in high and fine jewelry.

“There is also a story around pearls as being more natural and sustainable that certainly has an appeal to Millennials and Generation Z,” she said in an interview, echoing Mr. Gurung’s comment at the opening of the Tasaki boutique in London that “pearls seem to fulfill a need for poetry and history.”

FacebookshareGoogle+sharePinterestpin it
In Oman, Tailoring the National AttireWhat if the Road to Single-Payer Led Through the States?
Latest