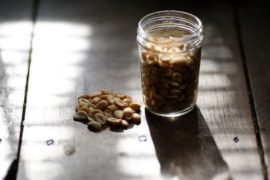 The first-ever drug regimen to blunt acute peanut allergies in children should be approved, experts told a Food and Drug Administration committee on Friday, because the therapy has the potential to reduce the risk of life-threatening reactions and to improve patients’ lives.

The new drug, called Palforzia and made by Aimmune Therapeutics, is an oral immunotherapy regimen that aims to reduce sensitivity to peanut allergens. It gradually exposes children to small amounts of peanut protein over the course of six months, until they can safely eat the equivalent of two peanuts.

The regimen begins with trace amounts of the protein that are carefully measured and increased incrementally under medical supervision as tolerance develops.

The goal is not to cure the allergy, but to reduce the risk that an accidental exposure to a small amount of peanut will trigger a life-threatening reaction. It might also relieve some of the fear and anxiety that some people feel about the possibility of experiencing the effects of a severe peanut allergy.

“This is one of the most important unmet needs of medicine,” said Dr. James R. Baker Jr., director of the Mary H. Weiser Food Allergy Center at University of Michigan, who spoke at the advisory committee meeting on behalf of the company. He was compensated for his time.

The demand for treatment among patients and their families is enormous, Dr. Baker noted. “Right now the only approved approach to this allergy is to avoid peanuts, and the amount of effort and cost involved in making sure everything your child is exposed to is peanut-free is overwhelming to most families,” he said.

“The quality of life of patients and their caregivers is adversely affected due to fear and anxiety about accidental ingestions,” he added.

One in 50 American children has a peanut allergy. These allergies are believed to cause more deaths from anaphylaxis — an acute physiological response that includes lowered blood pressure, shock and constriction of the airways — than any other food allergy, though the precise number is not known.

Because children generally do not outgrow peanut allergies, they must avoid peanuts, peanut oil and foods contaminated with traces of peanuts for their entire lives.

A double-blinded, placebo-controlled trial of the new drug, published last year in The New England Journal of Medicine, found that after a year, two-thirds of the 372 children who received the treatment were able to tolerate at least 600 milligrams of peanut protein — the equivalent of two peanuts — without having an allergic reaction.

Only 4 percent of the 124 children who had been given a placebo powder were able to consume that amount without a response.

Most of the participants were aged 4 to 17, and when they enrolled, all of them suffered from severe peanut allergies triggered by the equivalent of one-third of a peanut or less.

The trial, carried out at multiple medical centers, was designed and sponsored by Aimmune, the drug’s developer.

The drug itself consists of “defatted” peanut flour, carefully measured and packed into capsules or foil sachets of varying doses that can be easily opened and mixed with food.

The starting dose is three milligrams, which is gradually increased to 300 milligrams, the equivalent of one peanut, over a six-month period, followed by six months of maintenance therapy of the same amount. In order to retain their tolerance, patients would need to continue taking the maintenance dose, possibly indefinitely.

But the treatment doesn’t work for everyone. One in five children in the active treatment group withdrew from the study, many because of adverse side effects such as stomach pain, vomiting and nausea. And some children who were taking the drug needed epinephrine to treat severe allergic reactions.

Though many advocates for people with allergies have welcomed the new treatment — the first of its kind — there has been criticism.

In July, the Institute for Clinical and Economic Review, a nonprofit research organization in Boston that evaluates medical evidence, concluded in a scathing report that the oral immunotherapy treatment offers no benefit over simply avoiding peanuts.

Lianne Mandelbaum, who has a teenage son with a severe peanut allergy and writes the No Nut Traveler blog, said that the organization’s report displays a lack of understanding of what is required for parents to ensure that a child does not inadvertently ingest traces of peanut that contaminate many food products.

“It’s not as simple as it sounds to avoid a food,” Ms. Mandelbaum said. “We live with it and we do it, but it’s not black and white. You have to be vigilant 24-7, and things still slip through the cracks. You could do everything right and still get it wrong. In many cases of fatalities, there was just one time they slipped up.”

The institute’s report also called for more long-term data about safety and effectiveness, and said there was no evidence the Aimmune drug had any advantage over similar desensitization regimens that some physicians offer patients.

But many physicians do not offer the treatment, Ms. Mandelbaum noted, and it is not always covered by health insurance.

More articles about food allergies
FacebookshareGoogle+sharePinterestpin it
What are the best prenatal vitamins to take?You Will Love This Sheet-Pan Dinner
Latest