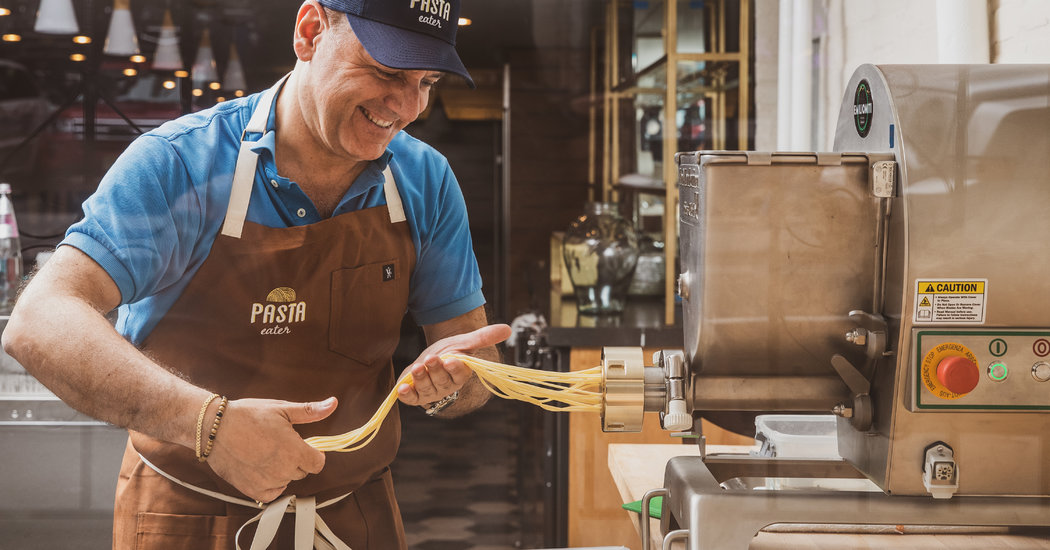 When Giusto Priola, a chef, opened Cacio e Pepe, a Roman-style restaurant downtown, he said his friends were surprised. “My friends know I’m from Sicily, and they kept asking why I was doing Roman restaurants,” he said. The simple answer is that his chef was Roman. Here, at his latest restaurant, Mr. Priola is featuring the food of Southern Italy. The chef, Luigi Cetrulo, is from Puglia, and, as the name of the new place implies, pasta gets top billing. “I make the fresh pasta, and Luigi cooks it,” Mr. Priola said. The pasta-making operation is on display at the end of the restaurant’s bar, at the front window. Burnt-wheat (grano arso) cavatelli, troccoli and orecchiette from Puglia share the menu with Tuscan pappardelle, Roman rigatoni alla carbonara, Sicilian paccheri and tagghiarini with cheese and prosciutto served in a wheel of cheese. Marinated anchovies, octopus, seafood skewers and lamb chops round out the menu. The narrow, simply decorated room, a few steps below street level, has a long bar and tables. (Opens Thursday)

Should you desire a French-onion-soup burger with bone-marrow-glazed onions, beef and onion demi-glace and Gruyère cheese, that craving can easily be satisfied at this new Midtown gastro pub. It’s a spacious affair on two levels, with a 60-foot bar on the ground floor and another bar on the mezzanine. The chef is Sean Olnowich. The restaurant’s name refers to the Elgin Botanic Garden, which was installed in this spot in 1801 and is said to have been the first botanical garden in the United States. The garden fell into disuse, and in 1814, the land went to Columbia College, which later sold it to John D. Rockefeller for Rockefeller Center.

The tiny Lower East Side branch of this vegan Mexican restaurant has acquired a much larger sibling in the West Village. The menu features signature dishes like meatless black bean “chorizo” and “carnitas” made with shredded hearts of palm, with new additions, like an avocado soup and a yuba taco. The space is divided into several rooms with a patio garden, and this location will have the same colorful aqua-driven look as the original.

The prolific downtown restaurateur Ravi DeRossi is offering vegan interpretations of Indian food at his newest spot, a makeover of Fire and Water, another of his restaurants. He is calling this latest an exotic vegetable bar. At her home in Denver, his mother, Sharmilla Lalchandani, has been showing the executive chef, Spencer Caine, how she makes family-style vegan dishes, like yellow lentil dip, bharta (stewed eggplant), brussels sprouts saag and dosa wraps. Rajah Abat, who worked at Gabriel Stulman’s restaurants, shares executive chef duties.

This elaborate addition to Williamsburg, Brooklyn, occupies 10,000 square feet in an old wire factory. It has several dining areas, a wood-burning pizza oven, a roof deck and a mezzanine. The chef is John DeLucie. (Thursday)

The group behind Crave Fishbar, which has locations on the Upper West Side and in Midtown, has opened a two-story taco restaurant, with casual counter service on the ground floor and a more elaborate restaurant with an agave bar upstairs. The menu of dishes like assorted tacos, roasted corn with aioli and rotisserie chicken is available on both levels.

This vegan spot in Notting Hill, London, will take up residency in New York from Sept. 13 though Feb. 29. The owner, Camilla Fayed, is seeking local organic and biodynamic ingredients for the menu.

This Japanese restaurant offers Western-style breakfast fare, items like rice balls for grab-and-go lunch, and an izakaya menu in the evening. (Monday)

A Montreal chain with many branches has opened one in Greenwich Village. It serves plant-based bowls, sandwiches and “burgers,” made with vegetables, grains, beans, tempeh and tofu in a counter-service format. There’s also a branch in Fort Lauderdale, Fla., and one coming to Portland, Me.

195 Bleecker Street (Avenue of the Americas), no phone, eatcopperbranch.com.

Mr. Robuchon died last year, but plans went ahead for his company’s Miami projects. Both have opened. The signature counter-style restaurant, L’Atelier de Joël Robuchon, has a second-floor location in the city’s design district. Le Jardinier, a branch of the produce-forward restaurant that opened in New York this year, with Alain Verzeroli in the kitchen, is on the ground floor of the same building, with patio seating.

This restaurant from the young chef Flynn McGarry will reopen on Thursday. It closed this summer so the chef could travel and hold pop-ups.

Andrew Carmellini and his partners in this restaurant group, Josh Pickard and Luke Ostrom, plan to add to their inventory by the end of 2020 with a place in NoMad. The name and focus have not been decided.

Ms. Ardu, who had a following for her Italian home cooking, is now the chef at Sauce Restaurant on the Lower East Side, which has just reopened. (It closed eight months ago for extensive renovations after a fire.) Ms. Ardu is adding swordfish carpaccio and spaghetti aglio olio to the restaurant’s red-sauce menu.

The chef at Bar Uchu on the Lower East Side has just left, and the kaiseki counter there is now closed until November. Eiji Ichimura, the Michelin-starred sushi chef at the omakase counter in the adjoining restaurant, Uchu, will take over the kaiseki counter.

This chef who worked in Las Vegas at Bouchon and Joël Robuchon is now the chef de cuisine at Jared Sippel’s Trattoria Italienne, which has become more casual.

Mr. McCarthy, who is well-schooled in Korean and Japanese food, is now the chef at Erin Norris’s Grindhaus in Red Hook, Brooklyn. Ms. Norris has decided to focus on Asian fare, and has put Mr. McCarthy in charge of the new approach.

This chef from Peru will give the menu at Locksmith Bar, in Washington Heights a taste of that country when he takes over the kitchen on Thursday.

FacebookshareGoogle+sharePinterestpin it
What can cause clitoris itching?Share of Americans With Health Insurance Declined in 2018
Latest