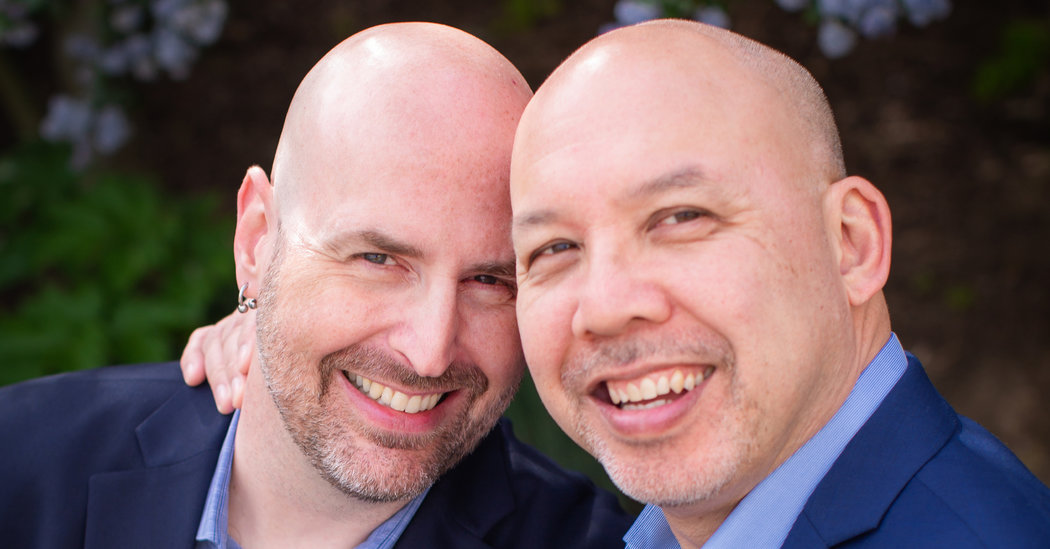 Padric John McCaig and Brian Henry Cheu were married July 13 at CuriOdyssey, a science museum and wildlife center in San Mateo, Calif. Zoevonda L. Sutton, a friend of the couple who became a Universal Life minister for the event, officiated, with Joel W. Gonzales, another friend, taking part in the ceremony.

Mr. McCaig (left), 44, is the accreditation analyst at the dental school of the University of California, San Francisco. He graduated from San Francisco State University.

He is a son of Wendy S. McCaig of Marysville, Tenn., and the late Michael R. DeAngelis, who lived in Newport, Tenn. The groom’s mother retired as a yard maintenance worker in Queens for the Long Island Rail Road. His father retired as a business management consultant in Manhattan.

Mr. Cheu, 56, is the director for community development in the Mayor’s Office of Housing and Community Development in San Francisco. He graduated from Stanford and received a law degree from Columbia.

He is the son of Dr. Donald H. Cheu of San Mateo and the late Lily Ginn Cheu. The groom’s mother was a fifth- and sixth-grade teacher at Andrew Jackson Elementary School in San Francisco before becoming a stay-at-home parent. His father, a general surgeon, retired as a staff physician at the Kaiser Permanente Medical Center in South San Francisco, Calif.

The couple met in 2005 while Mr. McCaig was helping a friend move out of an apartment in San Francisco. The friend’s roommate was a longtime friend of Mr. Cheu, who was visiting that same evening, and Mr. McCaig and Mr. Cheu got to talking, as both were working for nonprofit organizations at the time.

“He emailed me in the next few days, and it took me like a month or so to get back to him and say, ‘Hey it was nice meeting you and we should get together for lunch sometime,’” Mr. Cheu said. “That was quick for me — he proposed to me back in Christmas 2008, and we’re now getting married in 2019, so you can see, I’m not the fastest of movers.”