P.M. Forni, Who Argued for ‘Choosing Civility,’ Dies at 67 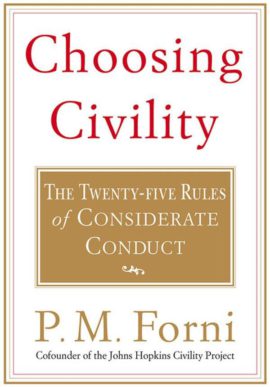 P. M. Forni, a professor of early Italian literature who became a leading exponent of civility in our own discourteous times, died on Dec. 1 in Towson, Md. He was 67.

His wife, Virginia H. Forni, said the cause was complications of Parkinson’s disease.

Dr. Forni was a faculty member at Johns Hopkins University in Baltimore when, in 1997, he became the principal founder of the Johns Hopkins Civility Project, which not only examined the importance of civility in human society but also encouraged the practice of it on campuses and in communities through campaigns with bumper stickers, buttons and speaking programs.

Dr. Forni, who directed the project (now known as the Civility Initiative) for many years, also wrote two books on the topic, “Choosing Civility: The Twenty-Five Rules of Considerate Conduct,” published in 2002, and “The Civility Solution: What to Do When People Are Rude” (2010).

“The first book is how not to be rude,” Virginia Forni explained in a telephone interview, “and the second book is what to do when other people are rude to you.”

The 25 rules he set out in “Choosing Civility” were not particularly surprising; they included “Speak Kindly” and “Keep It Down (and Rediscover Silence).” But they resonated. The book, which has been translated into German and Italian, is still frequently cited in articles and speeches, as is its follow-up.

Civility, to Dr. Forni, was not just a matter of learning and observing rules of good manners. It was something with very real consequences. Civility means less stress, which has advantages like improved health, safer driving and more productivity at work.

Lack of civility too is more than a matter of semantics, he argued.

“Acts of violence are often the result of an exchange of acts of rudeness that spiral out of control,” he told The Christian Science Monitor in 2007. “Disrespect can lead to bloodshed. By keeping the levels of incivility down we keep the levels of violence down.”

But Dr. Forni didn’t necessarily have a sky-is-falling view of the current state of human interactions.

The word “civility,” he noted in “Choosing Civility,” “derives from the Latin civitas, which means ‘city,’ especially in the sense of civic community.” Thus, said Daniel L. Buccino, who now directs the Civility Initiative, Dr. Forni considered the subject from the long view.

Dr. Forni would remind people that “we have been struggling with these issues for 2,000 years,” Mr. Buccino said by email. “He would also remind us that while there is much civility work still to be done, it was important to note how much progress we have made over the centuries.”

Pier Massimo Forni was born on Oct. 16, 1951, in Bologna, Italy. His father, Adriano, was a veterinarian, and his mother, Sheba (Lolli) Forni, was a homemaker. 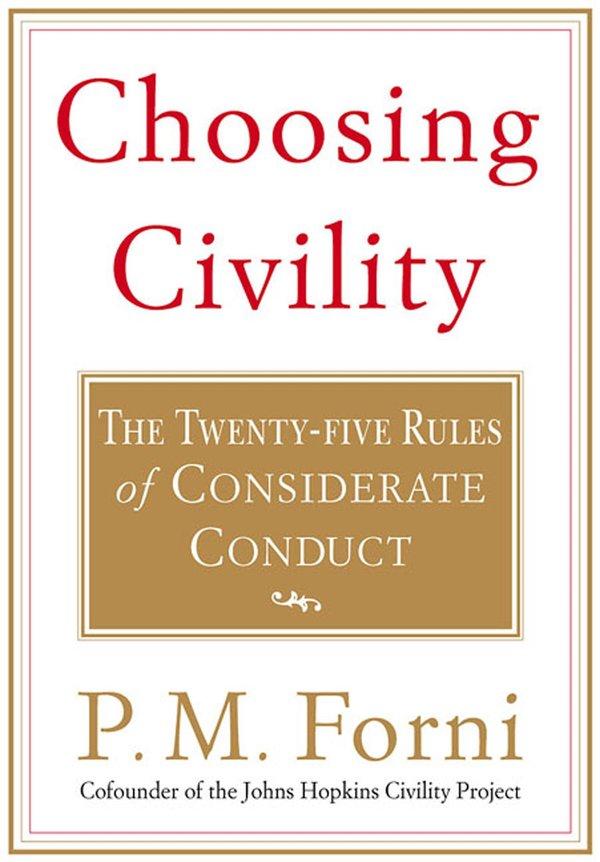 In this 2002 book, Dr. Forni outlined 25 rules “of considerate conduct,” including “Speak Kindly” and “Keep It Down (and Rediscover Silence).” They were not surprising, but they resonated.

Dr. Forni grew up in Treviso, Italy. After graduating in 1974 from the University of Pavia, he served for two years in the Italian army’s Alpini corps, which specializes in alpine warfare. He received a Ph.D. in Italian literature at the University of California, Los Angeles, in 1981 and joined the Johns Hopkins faculty in 1985.

Dr. Forni taught courses on Dante, Giovanni Boccaccio and other writers and thinkers from Italy’s past. His area of scholarship eventually led to his second field of expertise.

“It started with his interest in early Italian books of manners and courtesy,” Virginia Forni said. “He would teach classes on that, and it sort of grew out of that.”

“One day, while lecturing on the Divine Comedy, I looked at my students and realized that I wanted them to be kind human beings more than I wanted them to know about Dante,” he wrote. “I told them that if they knew everything about Dante and then they went out and treated an elderly lady on the bus unkindly, I’d feel that I had failed as a teacher.”

He set up the Civility Project with help from Giulia Sissa, a fellow professor now at U.C.L.A., and others, and in 1998 he and Professor Sissa organized an ambitious conference called “Reassessing Civility: Forms and Values at the End of the Century.”

There has occasionally been a backlash to the civility campaigns; some have seen them as a means of repressing criticism and muzzling the disenfranchised.

“I had to throw the book across the room,” one resident of Howard County, Md., said of “Choosing Civility” during an initiative there in 2008.

Critics notwithstanding, Dr. Forni became a go-to commentator when matters of civility made the news. He was quoted in news articles when the shock jock Don Imus was fired by CBS in 2007, when cyberhaters were piling on the actress Anne Hathaway in 2013, when electoral campaigns or holiday shoppers turned nasty.

Dr. Forni and Virginia H. Drake married in 2000; she survives him.

In addition to the civility books, Dr. Forni wrote “The Thinking Life: How to Thrive in the Age of Distraction” (2011), a meditation on the role of thought in the modern age.

“Every day,” he wrote, “we spend most of our time doing things that our parents and grandparents not only did not do, but also could not even have imagined. Unfortunately, deep thinking is often the illustrious casualty in the digital revolution.”

To be obsessed with the ephemera of modern culture, he argued, is to miss the best possibilities available to us.

“If we agree that life is important, then thinking as we go through it is the basic tribute we owe it,” he concluded. “It also happens to be the golden way to the good life — the kind of life in which happiness blooms.”