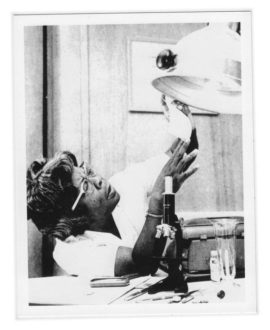 Overlooked is a series of obituaries about remarkable people whose deaths, beginning in 1851, went unreported in The Times.

Bessie Blount was about 7 when a teacher rapped her knuckles during a classroom assignment. The blow stung her, the reason even more so.

“For writing with my left hand!” Blount told The Virginian-Pilot newspaper in 2008, still incredulous more than 85 years later.

That act of defiance — along with her inventiveness — would serve her throughout an eclectic international career, as a nurse, physical therapist, wartime inventor and forensic handwriting and document analyst. With each of these moves she had to overcome the obstacles facing a black woman in the job, although she resisted being defined by her race.

Bessie Griffin was born into meager circumstances on Nov. 24, 1914, in rural Virginia to George Woodard and Mary Elizabeth Griffin. She later took on her grandmother’s last name, Blount. She studied at Diggs Chapel Elementary School in Hickory, Va. (now Chesapeake), near Norfolk. The school had been built after the Civil War by the black community to educate the children of former slaves.

“When I attended the school, black kids didn’t have textbooks,” she told The Pilot. “We later got them from the white schools. But each child would read a verse out of the Bible. That’s how we first learned to read.”

Her family later settled in New Jersey, where she studied nursing at Kenney Memorial Hospital in Newark, said her son, Philip Griffin. The hospital had been founded by Booker T. Washington’s physician, John A. Kenney Sr., after he moved to the area and found that hospitals would not hire black doctors.

She went on to study physical therapy at Union Junior College, now Union County College, and Panzer College of Physical Education and Hygiene, now part of Montclair State University, all in New Jersey. She eventually became a licensed physiotherapist and took a job at Bronx Hospital (now Bronx-Lebanon Hospital Center).

Many of her patients were World War II veterans who had lost their arms after undergoing amputations, and Blount taught them to write with their teeth and feet.

“You’re not crippled, only crippled in your mind,” she would tell them.

A doctor at Bronx Hospital then suggested, “If you really want to do something to help these boys, why don’t you make something by which they can feed themselves,” The Afro-American newspaper wrote in 1951.

Blount spent 10 months developing her first design of what she called an “invalid feeder.” Her workshop was her kitchen, and her materials were plastic, a file, an ice pick, a hammer, dishes and boiling water to melt the plastic into a mold.

That year she received a patent for part of the design, with a description of what she planned to include in a later version.

She then spent about four years and $3,000 making improvements and ultimately created a working model made of stainless steel, which she demonstrated at a New Jersey hospital. The audience gave her a standing ovation.

To operate the “invalid feeder,” a patient would bite down on a tube to activate a motor, and a morsel of food would be dispensed through a spoon-shaped mouthpiece. The device would automatically shut off between each delivery, allowing the patient time to chew.

It was hailed as “a most ingenious apparatus” by Dr. Malcolm MacEachern, the director emeritus of the American College of Surgeons.

Though Blount found a Canadian company to manufacture the device, the United States government was unenthusiastic about it, or at least unwilling to pay her asking price of $100,000.

Dr. Paul B. Magnuson, the chief medical director of the Veterans Administration then, told her that the device was “impractical.”

“Hand feeding by nursing and attendant personnel is the most satisfactory method,” he said.

Blount was a follower of Father Divine, who founded the International Peace Mission Movement, a cult-like religious movement. Father Divine encouraged her to give away her invention as a gift, so in 1951 she signed the rights over to the French government, which was interested in using it in its military hospitals.

“Forget me,” she would say decades later in explaining why she gave up on seeking money for her invention. “It’s what we as a race have contributed to humanity — that as a black female we can do more than nurse their babies and clean their toilets.”

She continued developing gadgets, including a kidney-shaped vomit basin that she constructed out of papier-mâché. Similarly shaped basins are used in hospitals today.

Blount kept working as a nurse, and began noticing patterns in her patients’ handwriting, her son said. For instance, their writing would change as they progressed in their physical therapy. 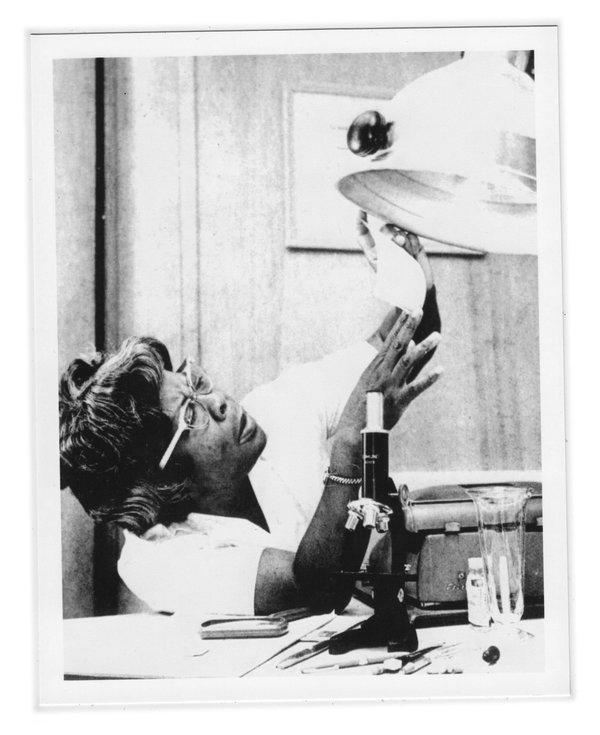 Blount in 1969 examining the signature on a check. She worked for several years as a forensics handwriting analyst for police departments in New Jersey and Virginia.CreditThe Daily Journal

She eventually turned her attention to forensics and became a handwriting analyst, detecting forged documents for the Vineland Police Department in New Jersey and for police departments in Virginia.

Later, she switched her focus again, taking an advanced studies course in the Document Division at Scotland Yard in 1977. She is believed to be the first black American woman to have trained there, said Philip Griffin, her son.

Back at home, she started a consulting business to examine evidence used in court cases. She did not look like the typical courtroom expert, but had a way of breaking down complex theories for the jury that would help her win cases, her son said.

“There’s this old black woman sitting in the back row not saying anything,” he said, “and then, when the lawyer would say, ‘O.K., I have my expert witness,’ she’d stand up, throw off her coat, throw off her rain bonnet — and she was silver-haired — and then she’d stand up and present her theory. It blew them away.”

On the side, Blount wrote for The New Jersey Herald News.

By her account she was once asked to donate her inventions to museums that celebrated achievements by African-Americans, but she refused, annoyed by the idea of her work being tied to her race.

“Why should I donate things I made,” she said, “and they’ll charge students to go and see them? No!”

“I’ll take them to schools, where the kids can hold them, touch them,” she added. “I tell them, ‘You’re a part of history.’ ”

Blount became an avid public speaker, traveling nationwide to talk about her life’s work to school audiences, civic groups and other organizations.

In 2008, she boarded a bus alone and returned to her hometown in Virginia. Her primary school had burned down years before, and she was there to take on yet another venture: building a museum and library to commemorate the schoolhouse and the contributions of those who had studied there.

Though she was 93, Blount had no thoughts of accepting death. “I’m gonna live just for spite,” she told The Pilot, “ ’cause my work is not done.”

FacebookshareGoogle+sharePinterestpin it
NFCR at the 2019 American Association for Cancer Research Annual MeetingBrowsing: How to Wear Fall 2019 Trends Now
Latest