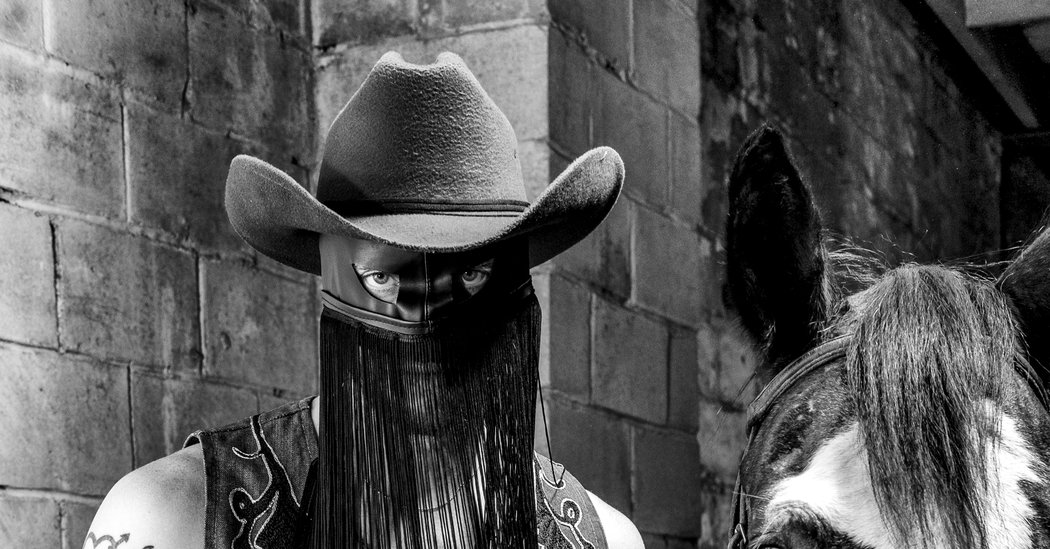 The enigmatic country singer known as Orville Peck is riding high these days. He is on the cover of British GQ Style, wearing star-spangled boots and a black mask that obscures his face.

The New Yorker, in a review of his debut album, “Pony,” called him the “masked man our yee-haw moment deserves” and described his voice as having “the sexy, menacing melodrama of Roy Orbison.”

The Los Angeles Times declared that he is “as venerated as any pop diva” by the “hipsters in West Hollywood,” which seems to be a thinly veiled reference to his large gay fan base.

On a sweltering afternoon in July, Mr. Peck made his way to the Kensington Stables in Brooklyn, to explore the wild West of Prospect Park by horseback. “Honestly, there is nothing I love more than being around a horse,” he said.

Giving off what he called a “cowboy-in-the-city kind of vibe,” he wore a sleeveless Western vest that showed off his toned and tattooed arms, and a pair of dusty Wrangler jeans. And although his character always wears a mask, he arrived without one, revealing his piercing blue eyes and chiseled features. But he quickly put one on (a menacing black leather mask with stringy tassels) when a photographer arrived.

“The masks exist as a point of discussion for people to add their own take on them,” he said.

A young instructor named Alexus Lawson walked him to the barn and had him wait by a tower of saddles. “Nice quality leather,” Mr. Peck said.

As it turned out, Mr. Peck was not the only show pony there. He was introduced to Tonka, a 20-year-old black horse who has appeared on “Today” and “Saturday Night Live.” He felt Tonka’s muscular body. “He’s so beautiful,” Mr. Peck said. “Look at those eyelashes.”

After saddling up, he followed Ms. Lawson and rode toward Ocean Parkway, looking like a campy butch Lone Ranger on the traffic-clogged streets of central Brooklyn. Despite his disguises, Mr. Peck has a cerebral, salt-of-the-earth nature.

“I don’t avoid questions about my life because I am trying to be obtuse,” he said. “I use it as something to enhance the artistry of what I do.”

It took some cajoling before he offered any personal tidbits, referring to a childhood spent in “Africa, North America and Europe,” with a father who is a glam-rock sound engineer and a mother who is an artist. He identifies as gay and gave his age as 31.

The rest of his story is more ambiguous. He hinted that he was a child model, as well as a theater actor in London. He created the masked character Orville Peck two years ago, and posts on social media showcasing his rich baritone and noir, spaghetti-western look were noticed by music executives.

“Pony” was released on Sub Pop records in March, just as the conservative traditions of country music were being challenged by artists like Kacey Musgraves and Lil Nas X. Mr. Peck’s torch songs made him an outlaw in a genre not known to embrace gay urban cowboys.

The four music videos from “Pony” drip with “Brokeback Mountain” homoeroticism, including the one for “Hope to Die,” in which Mr. Peck, clad in fringed denim chaps, echoes the line-dance steps from Madonna’s cowgirl phase.

His fans, like K.D. Lang’s, are far-flung. Mr. Peck is on an international tour that stops at such diverse places as Austin, Tex; Dublin; Kansas City, Mo.; London; Paris; Toronto; and Zurich. (His Oct. 15 show at the Music Hall of Williamsburg in Brooklyn is sold out.)

Rising stardom, however, has its downsides, especially for a masked singer. Online sleuths have recently identified him as Daniel Pitout, a performance artist and former drummer in the Canadian punk band Nü Sensae.

(After confirming Mr. Peck’s identity, his manager released a statement from Mr. Peck that read, in part: “I understand there is a temptation to try and unmask what I do, but to do so would be to miss the point entirely.” He added: “All I ask is that people respect my work and, more importantly, my fans enough to maintain this crucial part of my expression as an artist.”)

After crossing the traffic circle, Mr. Peck made his way into Prospect Park. The click-clack of Tonka’s hooves on the asphalt alerted bystanders to the masked horseman in their midst.

A group of schoolchildren shrieked with excitement. An old man sitting on a bench looked up from his newspaper. The tassels guarding Mr. Peck’s jaw line began to sway in sync with Tonka’s tail. “They both work as a fly swatter,” he said.

An urge overcame him and he began to sing “Old Town Road” (“I got the horses in the back”), in a deep range that suggested a subversive Chris Isaak.

The impromptu performance, however, was cut short because he had to call his manager. “Hello, I’m on a horse right now,” he said, pantomiming a phone with his thumb and pinkie finger, before giving Tonka a gentle kick to keep moving. “I guess no one would think that would be too strange coming from me,” he added, riding off into the afternoon sun.