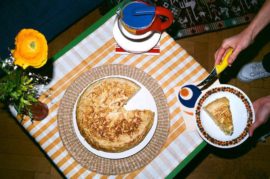 In “One Good Meal,” we ask cooking-inclined creative people to share the story behind a favorite dish they actually make and eat at home on a regular basis — and not just when they’re trying to impress.

In Spanish, the word cachete roughly translates to “slap in the face” — which is exactly the impact that the Spanish illustrators Nuria Bellver and Raquel Fanjul, better known as the duo Cachetejack, hope to have with their work. Their pieces arrive in a riot of color and movement, enlivening ad campaigns, animating children’s books and adorning outdoor walls. Clients have included everyone from Hermès to McDonald’s to the Neighborhood, a new monthly dinner series curated by the New York restaurateur Gabriel Stulman. Held at the Freehand Hotel in Manhattan and ticketed via Resy, the series entails a one-night-only visit from a buzzy chef like Nina Compton (of Bywater American Bistro in New Orleans), Asaf Doktor (of Dok in Tel Aviv) and Omar Koreitem and Moko Hirayama (of Mokonuts in Paris). Included in the ticket price is a Cachetejack poster made custom for each evening.

[Coming later this spring: the T List newsletter, a weekly roundup of what T Magazine editors are noticing and coveting. Sign up here.]

Both in their early 30s and living in Berlin, Bellver and Fanjul met in art school in Valencia, Spain, and have the kind of sisterly relationship where they finish each other’s sentences. When they throw parties, they make tortilla de patatas, a classic Spanish omelet.

“I like when it’s not well cooked inside, so the egg is a bit raw in the middle. So it’s a bit juicy,” Fanjul says. “Because it’s like …”

Back in Spain, you can find tortilla de patatas everywhere. The dish is served in wedges at tapas bars, with coffee at midday and even at weddings. Bellver’s parents have it about once a week in their home. The duo’s own trick for making it comes near the end of the cooking process, when the pan must be flipped upside-down in one swift motion to release the tortilla. 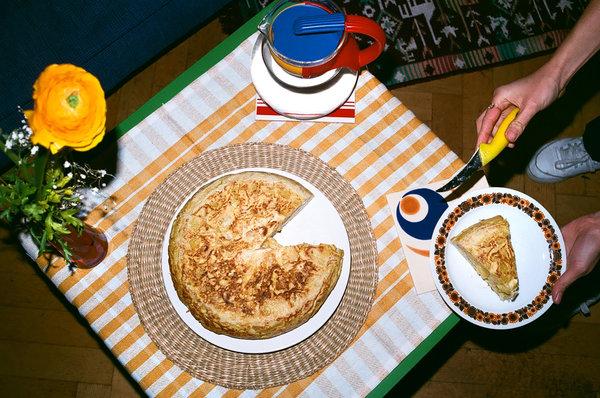 While you could certainly have it for breakfast, this is one omelet that works in the evening. CreditMaxime Ballesteros

1. Pour a generous glug of olive oil into a large nonstick skillet on low heat. Add the garlic cloves and let the oil temperature rise. Meanwhile, peel the potatoes and slice them thinly. Peel and chop the onions. Add onions and potatoes to the pan, then season with salt. Cover the pan, removing the lid occasionally to stir with a wooden spoon until everything is fried a golden brown. Remove from pan and set aside. Discard garlic. Do not wipe out pan.

2. Beat the eggs in a large bowl. Add salt and pepper. Mix in fried potatoes and onions until they’re all covered with egg. If you need another egg to accomplish this, add it.

3. Pour a little more oil into the skillet, turn the heat to high and add egg, potato and onion mixture. Use a wooden spoon to stir the mixture in circles until the eggs begin to set and the sides of the tortilla start to pull away from the pan, about two minutes.

4. Place a large plate face down on top of the skillet, as if it were a lid, and stabilize with your hand in the center. Quickly invert skillet so the tortilla slides out onto the plate. Now ease the tortilla back into the pan to cook the other side. Remove from heat when the tortilla’s center is still slightly wet, about a minute. Serve with salad or bread and Spanish red wine.

FacebookshareGoogle+sharePinterestpin it
Modern Love: Listen: Nazanin Boniadi Reads ‘A Sister’s Comfort, if Not a Cure’When Your Kid Realizes Bedtime Is a Scam
Latest