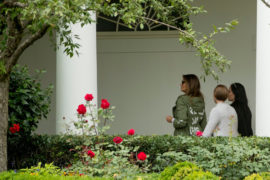 After #PantsuitNation, #CoatCountry? It’s a strong possibility, given the intense reaction to the autumn-leaf orange funnel-necked piece of outerwear Nancy Pelosi tossed on like a victor’s cloak after exiting her contentious meeting with President Trump and Senator Chuck Schumer on Tuesday. Who needs armor when you have a wool flamethrower?

Along with her dark glasses, sharp heels and smile of post-combat exhilaration, the coat whispered “burn” with a wink and a swish. It also helped to transform her from a seemingly tired symbol of the establishment to one of well-dressed revolt.

She told the president: “Don’t characterize the strength that I bring.” But to many who saw her afterward, the coat she donned as she walked out the front door represented it.

Social media was alight with excitement. There hasn’t been a coat that garnered this much attention in politics since, well — that one. You know, the Zara one with the writing on the back worn by the first lady last June. Although this one made a somewhat different impression.

It didn’t take long for the coat to get its own Twitter handle: @NancyCoat. Then it got another: @AmCoat. Everyone wanted to know where it was from and if they could get one.

There was some speculation the designer was Carolina Herrera, but that turned out not to be true; the brand makes a similar style with a different neck closure. The right answer was MaxMara — a design from a few years ago. The coat is no longer available for purchase, except perhaps from a reseller.

Ms. Pelosi had shopped her closet, and this was not, as it happened, the first time she had worn the coat for a public political event. She purchased it in honor of President Obama’s second inauguration in 2013, and the choice this time around served as both a reminder of her longevity in the seats of power and a hint of exactly where her allegiance lies. (Her dark sunglasses did not provoke quite the same reaction, but for those who care, they were Armani; the shoes were from Stuart Weitzman.)

Of course, it’s possible she just threw the old thing on and rushed out the door, though given the stakes surrounding the Trump meeting both for her own party’s leadership and the new balance of power between executive and legislative branches — plus, the fact that she knew the meeting would be televised and there would be a news conference afterward — it seems unlikely.

Ms. Pelosi has always been more aware of the power clothes convey than most in Washington, and unafraid of the appellation “chic;” attuned to both the visual punch that comes from color (Ms. Pelosi wore a lavender suit to lead her troops to the health care vote in 2010 and bright blue when she won the leadership nomination last month) and the viral line.

See, for example, the way the coat provided a neat point of contrast with those worn most often by the first lady, even beyond the infamous Zara one, which tend toward the tightly belted and epauletted trench style. Ms. Pelosi, it appears, is gearing up for a different kind of warfare. Her new team in Congress could not have missed it. Nor the fact that the coat buttoned left of center.

It could be a new uniform for a new term, with Ms. Pelosi framed as a new kind of fashion trailblazer. Indeed, though MaxMara was not aware of Ms. Pelosi’s choice when it happened, the company was delighted by the association and are looking into reinstating the style.

“You develop an emotional relationship with a coat like nothing else in your wardrobe,” said Ian Griffiths, creative director of MaxMara, in an email. “I can imagine why Ms. Pelosi chose to wear it for this important moment, and I’m honored.” 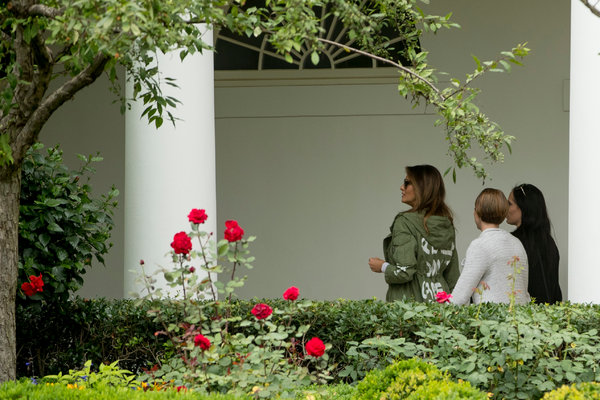 Melania Trump’s Wardrobe Goes Mute
After the jacket controversy, the first lady dressed for discretion as she accompanied her husband on his European trip. 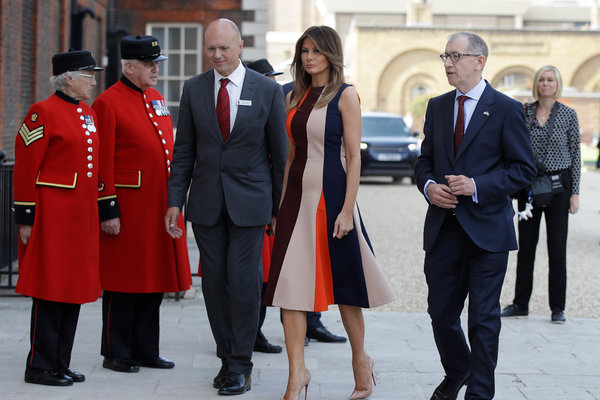 FacebookshareGoogle+sharePinterestpin it
Checking In? No Thanks. I’m Just Here to Use the Wi-FiEncounters: Wait Wait … for NPR Host Peter Sagal
Latest