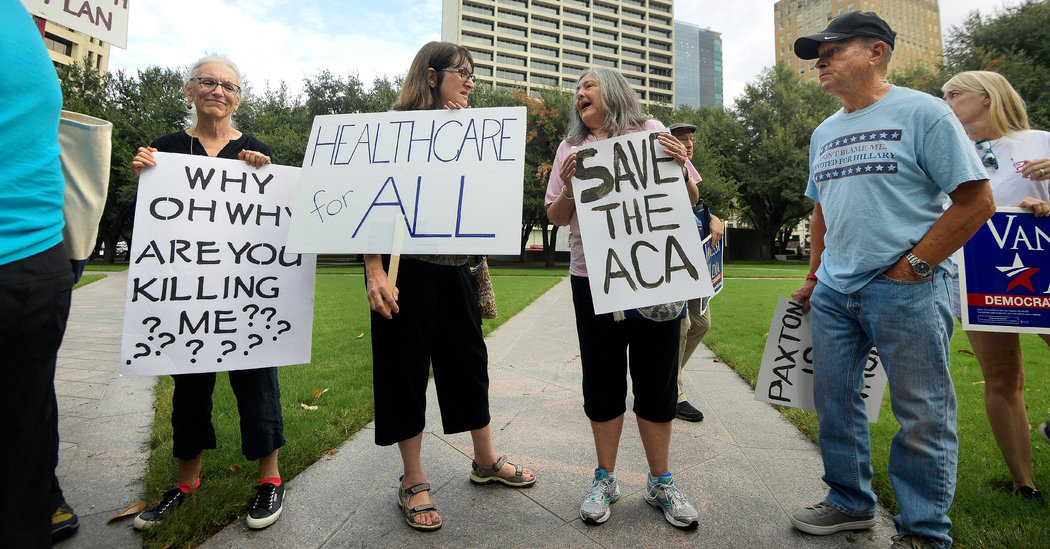 NEW ORLEANS — A federal appeals court panel will hear arguments Tuesday on whether a federal judge in Texas was correct in striking down the Affordable Care Act, a case with enormous stakes not only for millions of people who gained health insurance through the law but for the political futures of President Trump and other candidates in the 2020 elections.

The case, which could make its way to the Supreme Court ahead of those elections, threatens insurance protections for people with pre-existing medical conditions and many other sweeping changes the 2010 law has made throughout the health care system.

It was filed by a group of Republican governors and attorneys general against the federal government, which carries out the law. But the Trump administration refused to defend the full law in court and this spring said it agreed with the ruling that the law’s requirement for people to buy insurance was unconstitutional, and that as a result, the entire law must be dismantled.

That has left a group of 21 states with Democratic attorneys general to intervene to defend the law, along with the House of Representatives, which entered the case after Democrats won control of the chamber last fall.

A question at the heart of the case is whether the Affordable Care Act’s mandate requiring most Americans to buy health insurance or pay a tax penalty remained constitutional after Congress eliminated the penalty as part of the tax overhaul that Mr. Trump signed in 2017. When the Supreme Court upheld the mandate in its landmark 2012 ruling that saved the law, it was based on Congress’s power to impose taxes.

If the mandate is indeed unconstitutional, the next question is whether the rest of the Affordable Care Act can function without it. In December, Judge Reed O’Connor of the Federal District Court in Fort Worth said it could not and declared that the entire law must fall.

But in late June, the United States Court of Appeals for the Fifth Circuit asked for supplemental briefing from the parties on a third question: whether the Democratic states and House of Representatives even have standing to appeal Judge O’Connor’s ruling. To establish standing, a party has to show it has suffered a concrete injury that a ruling in its favor would redress.

The court also asked what the appropriate conclusion of the case should be if the intervening parties do not have standing and if the Justice Department, by no longer defending any part of the law, has “mooted the controversy.”

If the appeals court ultimately decides that neither the House nor the intervening Democratic states have standing and that the case has become moot, it could either let Judge O’Connor’s ruling stand or vacate it. In any event, the losing party will almost certainly appeal to the Supreme Court.

“All of this is going to be playing out against the backdrop of the 2020 presidential election,” said Nicholas Bagley, a law professor at the University of Michigan. He was among a bipartisan group of professors who argued in an amicus brief last year that the rest of the law should survive even if its mandate to buy insurance was found unconstitutional, and who have criticized the plaintiffs’ case as weak.

Democrats are already running ads against Mr. Trump and other Republicans over the case, including five state attorneys general who signed on as plaintiffs and will be up for re-election next fall. Protect Our Care, an advocacy group that supports the law, will start running digital ads this week against Republican senators considered vulnerable next year: Thom Tillis of North Carolina, Joni Ernst of Iowa, Cory Gardner of Colorado and Martha McSally of Arizona.

“President Trump’s Texas lawsuit will overturn America’s health care laws,” said Leslie Dach, the chairman of Protect Our Care, “and every Republican lawmaker who refused to condemn it is complicit in the destruction of their constituents’ health care.”

All of the parties, including the Republican states and Mr. Trump’s Justice Department, have taken the position that the appeals court has a reason to hear the case because a “live controversy” remains between the Republican state plaintiffs and the federal government, which is continuing to enforce the Affordable Care Act.

In supplemental briefs filed last week, all pointed to United States v. Windsor, in which the Obama administration changed its position and stopped defending the constitutionality of the Defense of Marriage Act — which barred federal recognition of same-sex marriages — but did not object to the case continuing to move through the courts.

The appeals court could take months to decide, but the Trump administration has said it will continue to enforce the many provisions of the Affordable Care Act until a final ruling is issued.

If Judge O’Connor’s decision stands, the number of uninsured people in America would increase by almost 20 million, or 65 percent, according to the Urban Institute, a left-leaning research organization. That includes millions who gained coverage through the law’s expansion of Medicaid, and millions more who receive subsidized private insurance through the law’s online marketplaces.

Insurers would also no longer have to cover young adults up to age 26 under their parents’ plans; annual and lifetime limits on coverage would again be permitted; and there would be no cap on out-of-pocket medical costs people have to pay.

Also gone would be the law’s popular protections for people with pre-existing conditions, which became a major talking point in last fall’s midterm elections, as Democratic candidates constantly reminded voters that congressional Republicans had tried to repeal the law in 2017.

Without those protections, insurers could return to denying coverage to such people or to charging them more. They could also return to charging people more based on their age, gender or profession.

The Kaiser Family Foundation, a nonpartisan research organization, has estimated that 52 million adults from 18 to 64, or 27 percent of that population, would be rejected for individual market coverage under the practices that were in effect in most states before the Affordable Care Act.