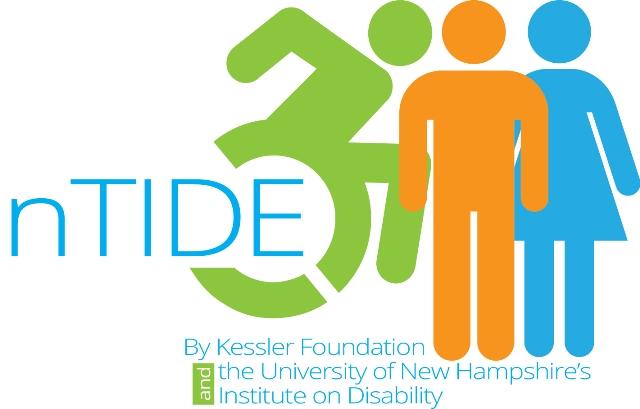 East Hanover, NJ – March 8, 2019 – Job numbers showed slight declines for Americans with disabilities, while the numbers improved for Americans without disabilities, according to today’s National Trends in Disability Employment – Monthly Update (nTIDE), issued by Kessler Foundation and the University of New Hampshire’s Institute on Disability (UNH-IOD). The minimal declines in the economic indicators may be consistent with the leveling off of gains for this population seen over the last year.

The Hollywood awards season has spotlighted the disparities in hiring in the entertainment industry. Programs such as Joey Travolta’s Inclusion Films are helping people with disabilities take advantage of the broad range of opportunities in creative and technical jobs. Learn more from our nTIDE Lunch & Learn webinar today, March 8, at 12:00 pm Eastern.

“The employment indicators for people with disabilities in February declined slightly compared to last year at this time,” said John O’Neill, PhD, director of employment and disability research at Kessler Foundation. “In addition, the 25-month upward trend in the employment-to-population ratio seen between February 2016 and March 2018 has been leveling off over the last year.”

“After some really great numbers for people with disabilities in 2017 and 2018, there appears to be a slowdown in the degree to which people with disabilities are engaging in the labor market,” noted Andrew Houtenville, PhD, associate professor of economics at UNH and research director of the Institute on Disability. “We will be keeping a careful eye on these data in the coming months.”

To take advantage of the many opportunities for employment in the creative arts, people with disabilities need orientation to potential careers, hands-on experiences to explore their talents, and the social skills needed for collaborative projects. Inclusion Films, based in California, offers film-making camps and workshops that foster creative development and reinforce social and vocational skills for teens and young adults with autism and developmental disabilities. In addition to five production studios in California, Inclusion Film’s popular programs are hosted by nonprofit organizations in cities around the country.

Inclusion Films was founded in 2007 by Joey Travolta, the actor, producer, director and screenwriter. Motivated by his positive experiences working with youth with disabilities, Travolta dedicates his efforts to expanding their opportunities for fulfilling employment in the entertainment industry. Inclusion Films’ production team provides custom video services for clients that include Easter Seals, NBA Cares, the Phoenix Suns, and the Bentonville Film Festival. These projects are incorporated into the camps and workshop curricula to provide students with real work experience and industry connections.

Inclusion Films offers training in all aspects of film-making — from script writing to technical editing — to meet the growing need for talent by the entertainment industry. The instructors are cinematographers, set designers, actors, and other working professionals. In Travolta’s experience, the students actively join in the creative process, and are adept at learning the technology required for editing as well as for developing creative content.

“A capable workforce is being left untapped,” Travolta asserted. “Our students are dedicated, dependable, and bring a different perspective to problem solving. They are a good fit for many of the skilled jobs in film-making and related fields. As for employers, hiring people with disabilities is easier than ever, and businesses can take advantage of on-site support and training for transitioning new hires, at little to no cost. All that is needed is leadership at the top, an open-minded team, and a commitment to diversity that includes people with disabilities.”

Every nTIDE release is followed by a noon ET nTIDE Lunch & Learn series. This live broadcast, hosted via Zoom Webinar, offers attendees Q&A on the latest nTIDE findings, provides news and updates from the field, as well as invited panelists to discuss current disability-related findings and events. Join live or watch the recordings at: //www.ResearchonDisability.org/nTIDE.

NOTE: The statistics in the nTIDE are based on Bureau of Labor Statistics numbers but are not identical. They are customized by UNH to combine the statistics for men and women of working age (16 to 64). nTIDE is funded, in part, by grants from the National Institute on Disability, Independent Living and Rehabilitation Research (NIDILRR) (9ORT5022 and 90RT5017) and Kessler Foundation.

Kessler Foundation, a major nonprofit organization in the field of disability, is a global leader in rehabilitation research that seeks to improve cognition, mobility, and long-term outcomes — including employment — for people with neurological disabilities caused by diseases and injuries of the brain and spinal cord. Kessler Foundation leads the nation in funding innovative programs that expand opportunities for employment for people with disabilities. For more information, visit //www.KesslerFoundation.org.

About the Institute on Disability at the University of New Hampshire

The Institute on Disability (IOD) at the University of New Hampshire (UNH) was established in 1987 to provide a coherent university-based focus for the improvement of knowledge, policies, and practices related to the lives of persons with disabilities and their families. For information on the NIDILRR-funded Employment Policy and Measurement Rehabilitation Research and Training Center, visit //www.ResearchonDisability.org.

For more information, or to interview an expert, contact: