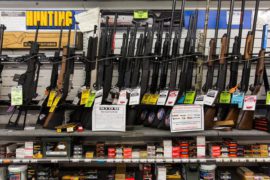 More people died from firearm injuries in the United States last year than in any other year since at least 1968, according to new data from the Centers for Disease Control and Prevention.

There were 39,773 gun deaths in 2017, up by more than 1,000 from the year before. Nearly two-thirds were suicides. It was the largest yearly total on record in the C.D.C.’s electronic database, which goes back 50 years, and reflects the sheer number of lives lost.

It was the third consecutive year that the rate of firearm deaths rose in the United States, after remaining relatively steady throughout the 2000s and the first part of this decade.

“It is significant that after a period of relative stability, now the rates are rising again,” Bob Anderson, chief of the mortality statistics branch at the C.D.C.’s National Center for Health Statistics, said in a phone interview. 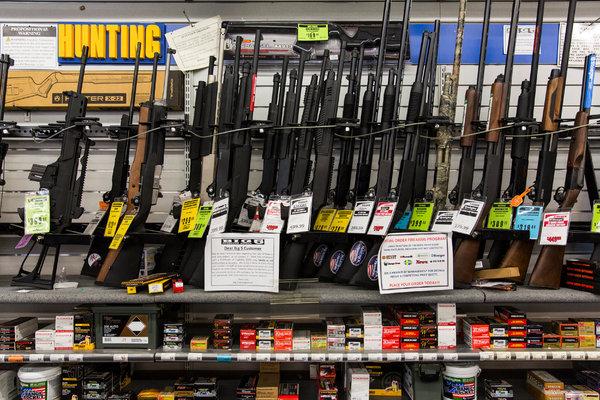 Guns and ammunition for sale at Big 5 Sporting Goods in Sacramento in May.CreditAndrew Burton for The New York Times

While there are signs that the movement to prevent gun violence gained momentum this year — state legislatures passed a surge of new gun control laws, gun control groups outspent the National Rifle Association in the midterm election cycle and the medical community recently took on the N.R.A. over an assertion that doctors should “stay in their lane” on gun policy — the findings underscore that even after such efforts ramped up after the Sandy Hook Elementary School shooting in Newtown, Conn., in 2012, gun violence continued its dizzying assault on America.

Suicides have historically made up most deaths by firearm in the United States, research shows.

In 2017, about 60 percent of gun deaths were suicides, while about 37 percent were homicides, according to an analysis of the C.D.C. data by the Educational Fund to Stop Gun Violence, a public health think tank. (The group is a sister organization of the Coalition to Stop Gun Violence, an advocacy group that works to oppose the N.R.A.)

Suicide over all has been on the rise for more than a decade and is the 10th leading cause of death in the United States, according to the health statistics center. But researchers say firearm homicide has ticked upward recently and also helps explain the rise in gun deaths since 2015.

Among other public health problems, drug overdose deaths have also been surging, a trend that continued in 2017. About 70,000 people died from drug overdoses last year — almost double the number that died from guns, the health statistics center reported.

Mr. Anderson said there could be a correlation between drugs and gun deaths. While the gun death rate is higher than it has been in some time, he noted that it was even higher in the 1970s, 1980s and 1990s, which corresponded with heroin and crack cocaine epidemics.

“Now with the fentanyl issue and at the height of the drug overdose epidemic, now we are seeing rises in gun deaths,” Mr. Anderson said.

Dakota Jablon, who analyzed the C.D.C. data for the Educational Fund to Stop Gun Violence, noticed another trend underlying the data: state-by-state variations, which she believes could reflect differences in gun laws.

For example, Kansas, which received an F from the national advocacy group Giffords Law Center’s gun law scorecard, had increases in both its firearm suicide and homicide rates over the past decade. New York, which was given an A-minus, had both rates decrease, according to her analysis of C.D.C. data.

“Some states are doing incredible work,” Ms. Jablon said. “They are passing these lifesaving policies that are clearly working.”

Dr. Garen Wintemute, an emergency medicine physician who is the director of the Violence Prevention Research Program at the University of California, Davis, said that the rise in firearm deaths was a result of “a national unwillingness to take this problem seriously.”

In 1996, under pressure from the N.R.A., Congress stripped the C.D.C. of its budget to study the health effects of shootings and prohibited the agency from advocating or promoting gun control.

“We have decided as a country not to do research on this problem, so we don’t understand it,” said Dr. Wintemute, a leading researcher on gun violence who identified himself as a member of the N.R.A.

But recently, mass shootings — at schools and music venues and houses of worship — have rocked the American consciousness. Though public mass shootings make up no more than 1 percent of all firearm deaths, Dr. Wintemute said, they have changed the dynamic of the conversation.

“I’ve been working on this problem full time since the early ’80s and there has never been a time like the present in which everybody feels some personal sense of risk,” he said.

This spring, student activists led March for Our Lives protests across the country, after a shooting at Marjory Stoneman Douglas High School in Parkland, Fla., left 17 dead. More recently, doctors weighed in after the N.R.A. took aim at their profession in a tweet: “Someone should tell self-important anti-gun doctors to stay in their lane.” Physicians, in turn, shared painful stories about treating gunshot victims.

In an interview at the Tedmed event in November, the surgeon general, Dr. Jerome M. Adams, defended the right of doctors to talk about gun violence.

Despite the recent increase in firearm deaths, Dr. Wintemute said he had reason to be optimistic for the future.

“For the first time in our history, everybody has a sense of personal involvement,” he said, adding, “That universal sense of personal risk might just lead to an increase in willingness to do something about the problem.”

FacebookshareGoogle+sharePinterestpin it
The Sweet Spot: How Do I Write About My Life Without Alienating Everyone in It?Off the Menu: Barca, Seafood With a View, Opens on Staten Island
Latest