My Space: A Tour of Rock Climber Tommy Caldwell’s Garage 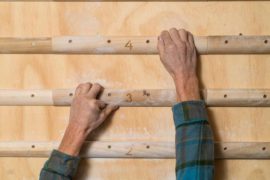 Occupation: professional rock climber; star of the documentary “The Dawn Wall”; author of “The Push.”

His favorite room: His garage, which he converted into a climbing gym and office. The big open room with a lofted work space is a big step up from Mr. Caldwell’s first practice wall at his childhood house, where he and his father glued rocks and fashioned a rudimentary arch from plywood. “This one,” he said, “is pretty awesome.”

There’s a Weezer song where the lyrics go, “In the garage, I feel safe.” How do you feel in your garage?

It’s totally like my Zen place. I put on music. I train. I get to recenter myself in there. My office is in there, too, so it’s my creative space.

For the past decade, I’ve primarily been on climbing trips. But I’d just had my first kid, and was about to have a second one. I was also writing my book. I was going into the first period of my life where I was going to be home a lot. I wanted to hold on to my climbing fitness, so I built this home gym. 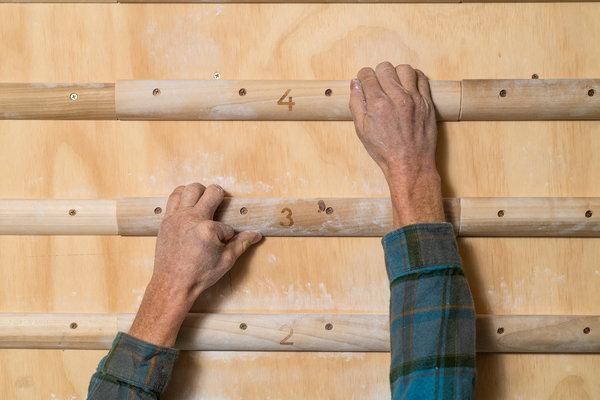 “One of the nice things about indoor training is you can make holds that are better on your skin,” Mr. Caldwell said.CreditDaniel Brenner for The New York Times

«It’s totally like my Zen place,» Mr. Caldwell said of his garage.CreditDaniel Brenner for The New York Times

Usually, I chop wood to warm up. Then I go in there, climb around on the wall. I try to block out three hours, minimum. One of the nice things about indoor training is you can make holds that are better on your skin, so you can train more before your fingers wear out. You can get stronger faster climbing inside.

There’s so much gear and clothing in here. Like this big bin of shoes.

I have different shoes for different types of climbing, six or seven different shoes that I alternate. Some I can wear through in a few weeks. Then I have running shoes over by the door, ski boots. There’s an absurd amount of footwear in there.

What does the orange X on that checkerboard wall mean?

That was just probably my kids goofing around with tape. The checkerboard wall is just for the kids. We’ll all go in there and train together and have fun. Sometimes we’ll put gummy bears on the holds, or cars, and they climb up to get them. It’s like a bounce house for the kids.

Climbing in here, are you at a remove from the danger of your profession?

As I get more experienced, I love the idea of going into big mountains and doing big climbs. But the problem is, it’s getting more dangerous, especially alpine climbing. As a father, I’m reminded that it’s not worth it to die.

A memento to Hayden Kennedy, a friend and fellow rock climber.CreditDaniel Brenner for The New York Times

FacebookshareGoogle+sharePinterestpin it
If You Don’t Have Flannel Sheets, Do You Even Know What ‘Cozy’ Feels Like?Moderate Drinking May Benefit Heart Failure Patients
Latest