Mini-Vows: Who Could Have Predicted It? (Well, Actually Two Different Psychics) 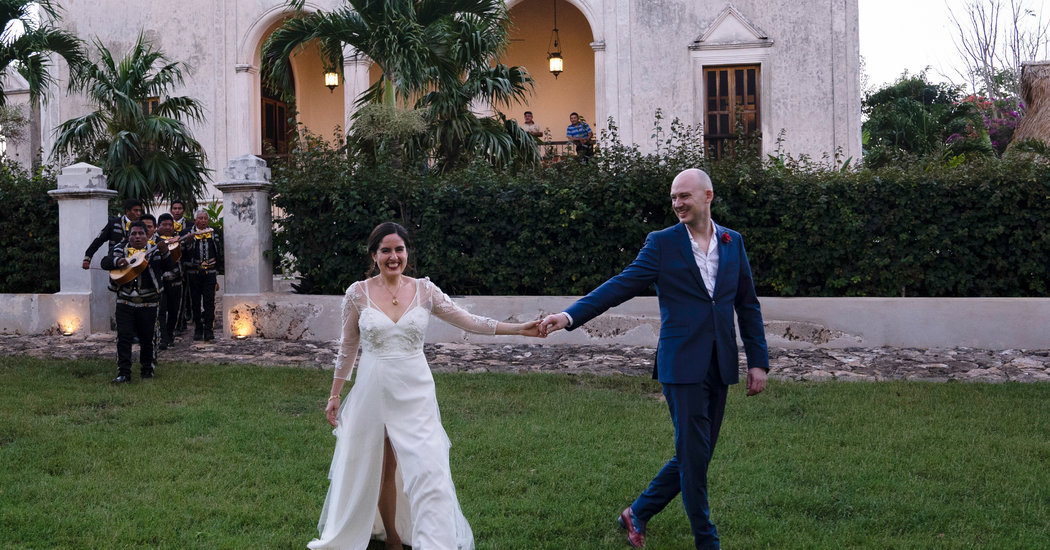 Vanessa Beatriz Golenia and Peter Gynd Medley were married March 6 at the Manhattan Marriage Bureau. A staff member of the City Clerk’s Office officiated. On Feb. 23, the couple took part in a celebration ceremony in the Yucatán, Mexico, that was produced by Mia Rovengo, a New York playwright, and took place at Hacienda Kancabá, near the town of Espita.

The bride, 34, is the director of strategy at Jwalk, an advertising agency in New York. She graduated from the University of San Diego and received a certificate in account planning from Miami Ad School.

She is a daughter of Beatriz L. Golenia and Gerd Golenia of San Diego. The bride’s father retired as a San Diego-based long-haul trucker. Her mother, also retired, was an executive assistant at San Diego Gas and Electric.

The groom, who is 37, legally changed his surname to Gynd. He is an artist, independent curator and the director at Lesley Heller Gallery in New York. His conceptual landscape-based paintings and photographs were on display from May 18 to June 3, 2018 at the Ground Floor Gallery in Brooklyn.

He graduated from the Alberta College of Art and Design in Calgary, Alberta, Canada.

He is a son of Ursula Medley of Powell River, Canada, and Douglas G. Medley of North Vancouver, Canada. The groom’s mother, based in Powell River, is a plein-air oil painter with a focus on the Canadian West Coast landscape. His father, a musician in Vancouver specializing in Cape Breton style fiddle, retired as an insurance salesman there.

Ms. Golenia and Mr. Gynd met in Brooklyn in June 2015 — she lived in Greenpoint and he in nearby Bushwick — shortly after he searched for “feminist dating apps,” and subsequently matched with her on Bumble.

“I was looking for a certain kind of partner,” he said, “someone who was a very strong, independent woman and wasn’t afraid to speak her mind.”

Both of them had gone to their own psychic for a peek into their future social lives. Ms. Golenia’s psychic told her, “O.K., you’re definitely meeting someone. He’s either European or he’s been spending a lot of time in Europe. You’ll know it’s him because he just got out of something, either a relationship or a job.”

Two weeks after Ms. Golenia met Mr. Gynd, he mentioned to her that he had just quit a job that had him traveling throughout Europe for the last two years.

“I was like, wow,” Ms. Golenia said. “I wondered if this is the guy my psychic was talking about. I had butterflies in my stomach.”

Mr. Gynd’s psychic had urged him to get on all of the dating apps he possibly could to find a partner, which led him to Ms. Golenia.

Neither Ms. Golenia nor Mr. Gynd told the other about their respective psychics until long after they met. “I guess neither of us wanted the other to think we were crazy,” Ms. Golenia said, laughing.

They met in person on Pride Day in 2015 over a drink at a bar in the Williamsburg section of Brooklyn. After a few dates, Mr. Gynd took Ms. Golenia to Beacon, N.Y., to see the Dia Foundation’s museum.

Before the date was over, they made a pact to delete their online dating profiles.

“I had dated creative types before, but they lacked stability or were emotionally unavailable,” Ms. Golenia said. “Peter was well grounded with a strong moral compass and as an artist he saw the world in a different, more beautiful way than most others, and I was attracted to that along with the fact that we shared the same values and adventurous spirit.”

Mr. Gynd proposed in August 2017 during a grueling 49-kilometer (30.4-mile) hike on the remote western coast of Vancouver Island, on an unnamed beach that the couple called “Engagement Beach.”

“Vanessa has this unbinding, positive outlook on life,” Mr. Gynd said. “She will always find the good in any situation, and as far as our situation, she has always shown me true love.”

FacebookshareGoogle+sharePinterestpin it
The Look: Work Songs of the Cowboy Poets‘Project Runway’ Is Hot for You Again. Will You Get Back Together?
Latest