Mini-Vows: She Wanted a Mate, He Needed a Mower 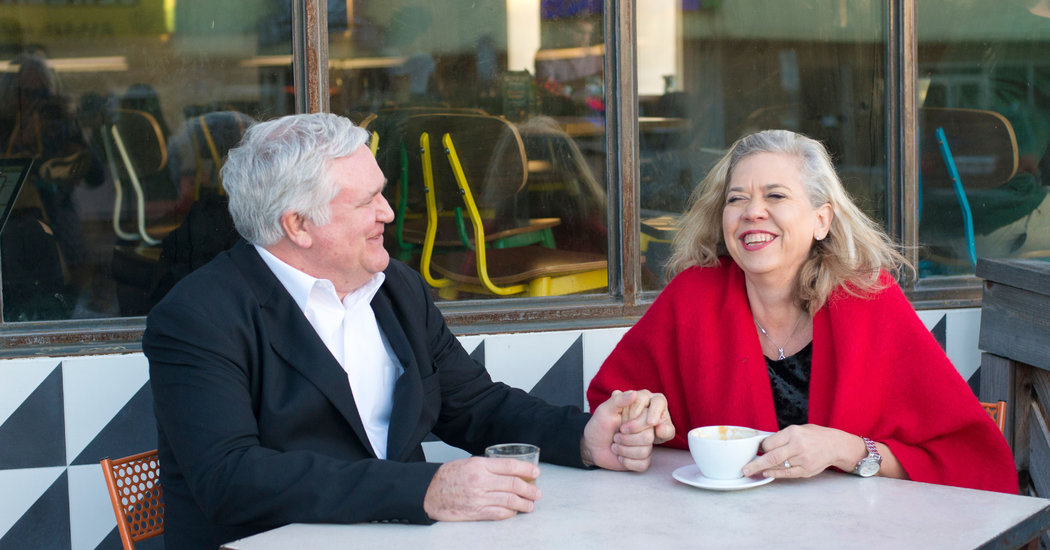 The bride, 58, is a media training coach for business executives in Dallas. She graduated from the University of North Texas. She was until Feb. 13 working in media relations for AT&T in Dallas.

She is a daughter of Lois J. Brandon of Fayetteville, Ark., and the late Arthur L. Brandon.

The groom, 60, is a quality engineer at Lockheed Martin in Fort Worth. He is a son of Frances Moody of Lake Jackson, Tex., and the late Forrest Bankston Moody.

Ms. Brandon and Mr. Moody met through Craigslist in March 2018.

“I had heard an internal message, from deep inside me, to put an ad on Craigslist in search of meeting someone I could potentially share the rest of my life with,” Ms. Brandon said. “He was looking for a lawn mower.”

Three months before placing that ad, Ms. Brandon, writing about New Year’s resolutions and wishes in her daily planner, highlighted a desire to be engaged at some point in 2018.

The ad itself included a steamy, hypothetical scenario that involved Ms. Brandon walking into a bar.

“From across the bar, you notice a tall, voluptuous brunette with striking eyes,” the ad read in part. “Her black dress hugs her curves, the red high heels were crossed under the bar stool.”

A man then asks Ms. Brandon, “Is this seat taken?” to which she replies, “This seat is taken by you.”

The ad concludes with a question that was to be answered by anyone who was interested in taking Ms. Brandon out on a date: “And then what happens next?”

She received about 300 responses.

“About one-third were what you would expect, very explicit and rather disgusting,” she said. “Another one-third were apparently nice guys who were misguided, married or otherwise and not at all interesting, and the final one-third were interesting and warranted further communication.”

She whittled them down one by one — dating a few along the way — until Mr. Moody was the last man sitting.

“We had a few nice exchanges before he asked me out,” Ms. Brandon said. “I assumed he wanted the obligatory Starbucks look-each-other-up-and-down first meet.

But all he wanted was a chance to get to know her better, and she agreed to meet him for dinner.

“She had arrived dressed exactly as she had described herself in the ad,” Mr. Moody said. “Afterward, the only way I could describe both her and our first date was ‘wow.’”

At month’s end, Ms. Brandon reinjured her right knee, which was originally damaged in a car accident years earlier, and she would spend the next three months in great pain before undergoing surgery.

Before she could ask “what happens next,” Mr. Moody stepped into the role of caretaker. “He took care of me at his own insistence,” Ms. Brandon said. “This told me who he was, someone very dependable who wanted to me help in any way he could, and I felt safe in his presence.”

On Jan. 2, Ms. Brandon was back at it with her daily planner, jotting down her New Year’s resolutions and some more wishes. Two days later, one of those wishes came true.

“I got laid off from my job,” she said. Ms. Brandon explained that as much as she liked working at AT&T in Dallas, she had become exhausted from working around the clock. “I wanted to focus full time on being a wife and starting my own business,” said Ms. Brandon, who noted that she had accepted a voluntary layoff. “When I received that email from work regarding layoffs, it felt magical in a sense that two of my wishes in the last two years had come true.”

So what happens next?

“That question can only be answered by a higher power,” she said. “But for me and Kenneth, there are so many other wonderful things to wish for in the years ahead.”

Mr. Moody can take “lawn mower” off the wish list.

Ms. Brandon already has one.