Mini-Vows: Eventually They Fell in Love (Their Cats, Not So Much) 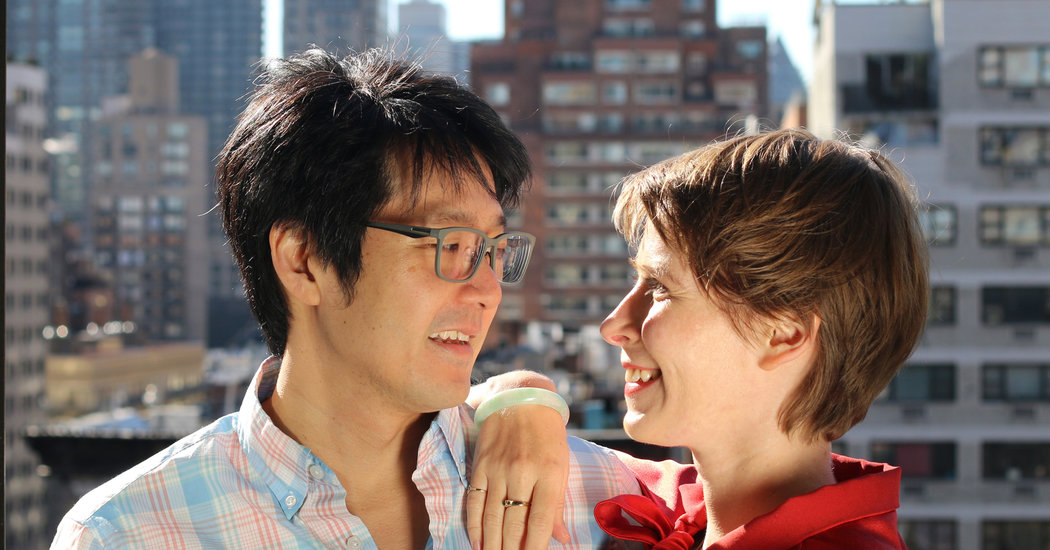 Elizabeth Storm Garner and John Jung Wang were married March 23 at the winter home of the bride’s family in Borrego Springs, Calif. Susan Hwang, a friend of the bride, officiated through California’s deputy marriage commissioner for a day program.

The bride, who is 35 and known as Storm, is studying for a master’s degree in oral history at Columbia, from which she graduated with a bachelor’s degree in creative writing. She was the costume and production designer for the narrative feature film “South Mountain,” by Hilary Brougher, which had its premiere on March 11 at the South by Southwest film festival in Austin, Tex.

She is a daughter of Wendy Feltman Garner and William V. Garner of Washington. Her mother is a landscape painter and muralist whose sky and seascape oil paintings will be on display in April at the Cross MacKenzie Gallery in Washington. The bride’s father retired as an international political consultant.

The groom, 37, operates the Queens International Night Market, an open-air night market in Flushing Meadows Corona Park, Queens, featuring vendors selling food and merchandise, as well as cultural performances celebrating the diversity and heritage of Queens and the rest of New York City. He was previously a corporate lawyer with Simpson Thacher & Bartlett, the Manhattan law firm.

He holds three undergraduate degrees from the University of Michigan, a bachelor of arts in philosophy, and two bachelor of science degrees, one in biopsychology and cognitive science and the other in mathematical physics. He also received both an M.B.A. and a law degree from Yale.

He is a son of Lucy Wong Wang and David Chih-Ping Wang, who live in Arlington, Tex., and Taipei, Taiwan. The groom’s mother retired as a customer service representative at a Toys “R” Us in Arlington. His father, also retired, owned a chain of Chinese restaurants, including three in Manhattan, all named Wok N Roll.

The couple met in May 2014, shortly after what Ms. Garner described as being “unceremoniously dumped” by her boyfriend. After closing the door on trying to win him back, she opened another when happening upon Mr. Wang’s online dating profile, to which she attached a “liked.” She described it as “so disarmingly genuine, unpretentious, and fun to read.”

Mr. Wang wrote back instantly, and Ms. Garner enjoyed his sense of humor. Their wide-ranging online conversation continued shortly thereafter at a Manhattan bar, where each learned that the other owned a pair of cats.

A second meeting was canceled when Ms. Garner was hospitalized with a staph infection in her leg. When Mr. Wang asked what she most wanted to eat upon being discharged, she said pho, and he spent the next four days figuring out how to make the Vietnamese bone soup from scratch.

Their friendship continued to deepen, though Mr. Wang had hoped instead for them to turn a romantic corner. “She made it very clear she just wanted to be friends,” he said. “I was heartbroken.”

In February 2015, a Kickstarter video created by Ms. Garner to help promote and raise money for Mr. Wang’s Queens market got underway, and three months later the market’s gates opened to tens of thousands more visitors than expected.

But Ms. Garner was not among them.

“We had a falling out over some business stuff,” she said, “and what was probably some miscommunication about our feelings for each other.”

Three hours later, they were together again at a favorite bar in Manhattan, catching up at warp speed.

“I had been doing a lot of deep thinking about John,” Ms. Garner said. “I realized it was stupid to have let our friendship go.”

Mr. Wang said he “didn’t know what to expect,” at their impromptu reunion, but they quickly turned that romantic corner, and it wasn’t long before Ms. Garner was moving into Mr. Wang’s Manhattan apartment. She brought along her two cats, Attila and Spacebar, who did not get along with his two cats, Audrey and Elmo (who are now living with Ms. Garner’s parents in Washington).

“We tried everything to keep them together; we read every cat psychology book out there,” Ms. Garner said. “I guess some relationships are meant to be, and some are not.”

FacebookshareGoogle+sharePinterestpin it
with …: It’s Delightful, It’s Delicious, It’s DeVitoWhat to Do When You Are a Runner Who Can’t Run on Race Day
Latest