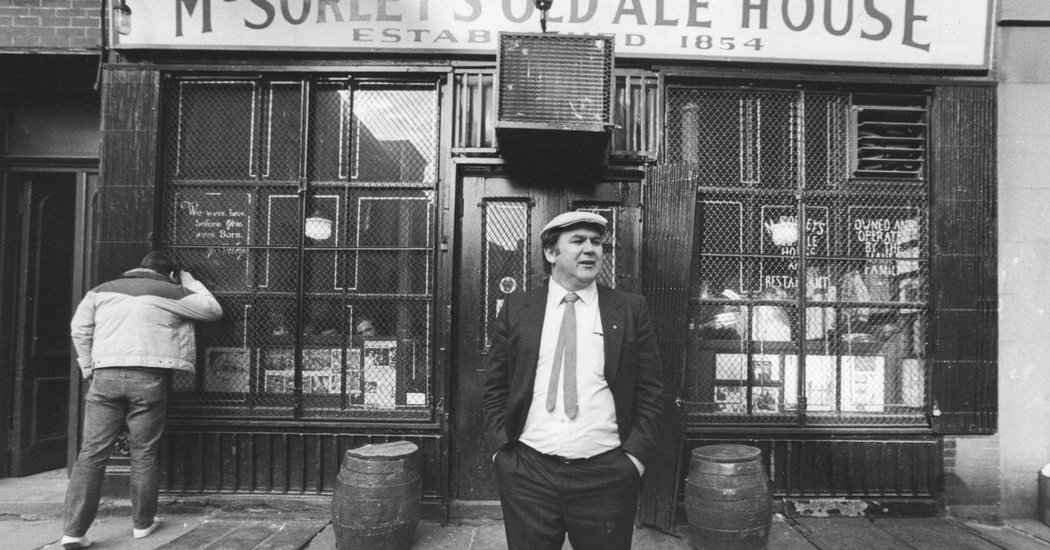 Matty Maher, the patriarch of only the third family to steward the venerable dive bar McSorley’s Old Ale House since it opened in the East Village of Manhattan in the mid-19th century, died on Saturday in Queens. He was 80.

The cause was lung cancer, his daughter Teresa de la Haba said.

Mr. Maher, who could trace his career at McSorley’s to a bit of end-of-the-rainbow serendipity in Ireland, began by tending bar at the saloon in 1964 as an Irish immigrant.

He graduated to manager as the beer hall, surrounded by neighborhood blight near the Bowery, tottered at the brink of bankruptcy; survived the loss of a gender discrimination case in 1970 that forced McSorley’s to delete the last two words of its durable slogan vowing “Good Ale, Raw Onions, and No Ladies”; and endured a Health Department ordinance that, while it banned smoking, had the unintended consequence, Mr. Maher said, of encouraging customers to drink more.

The bar was immortalized early in the 20th century by the paintings of John Sloan of the Ashcan School (one, displayed at the 1913 Armory Show, was said to have been priced at $500 and failed to sell) and by Joseph Mitchell’s 1940 profile in The New Yorker titled “The Old House at Home,” the bar’s name when it was opened by John McSorley about 1854.

Mitchell had distinguished McSorley’s as a “dark and gloomy,” unpretentious and “utterly democratic” place where malt and wet hops contributed to “a thick musty smell that acts as a balm to jerky nerves.”

Mr. Maher was perfectly cast as the publican.

“He was a five-foot-eight spark plug,” the author and journalist Rafe Bartholomew wrote in a memoir, “Two and Two: McSorley’s, My Dad, and Me” (2017), “with the Irish gift of gab, a belly laugh that could fill the front room and an explosive temper when he needed it.”

When an amateur historian challenged McSorley’s reputation as New York’s oldest Irish pub, Mr. Maher commissioned a regular customer, Bill Wander, to turn the tables and prove the bar’s date of birth, which he did.

In 1936, the McSorley family sold the bar to Daniel O’Connell, a patron and police officer, who left it to his daughter, Dorothy Kirwin. In 1964, while vacationing near Kilkenny, Ireland, Ms. Kirwin’s husband, Harry, was stranded with a flat tire when who should come along to offer help but 25-year-old Matty Maher.

Harry Kirwin promised Matty a job at McSorley’s if he ever moved to New York. He accepted the offer, set off for America and ultimately, in 1977, bought the bar and the building it occupies, at 15 East Seventh Street near Cooper Square, from the Kirwins’ son.

Matthew Dennis Maher was born on Nov. 8, 1939, in Kilkenny to Patrick and Ellen (Fogarty) Maher. His father was a farmer, his mother a cook.

After leaving school at 14, he worked for a farmer, drove a delivery truck for a local meat company and caught foxes, providing them to wealthy landowners for hunts.

He married Teresa Mary Brady of County Meath, Ireland. She and Ms. de la Haba survive him, along with four other daughters, Ann Marie Pullman, Kathy Isaakidis, Adrienne Noyes and Maeve McNamara, and 12 grandchildren. Mr. Maher, who died at Flushing Hospital, lived in the Malba section of northern Queens.

Though he retired years ago, Mr. Maher, like McSorley’s itself, was a font of froth and fact about the bar and its memorabilia, which includes a sawdust-sprinkled floor, a pair of Harry Houdini’s escape-proof handcuffs, a wanted poster for “the Murderer” John Wilkes Booth and an icky accumulation of wishbones that dangles from a gas lamp over the bar.

Mr. Maher would explain that the turkey furcula tradition dated to World War I, when departing doughboys, after finishing their last full meal stateside, would hang the bones above the bar as a good luck wish that they would return safely.

As a bartender, manager and owner, he was philosophical, often reminding family and friends, “It’s not what you become in life but what you overcome.”

In 1970, after Mayor John V. Lindsay signed legislation barring discrimination in public places because of gender, altercations erupted at McSorley’s between longtime customers and female newcomers.

“I’m afraid it will be this way for a few days,” Mr. Maher told The New York Times. “They’re a little upset, you see.”

It took a little longer, until 1986, in fact, until McSorley’s added a women’s restroom. Still, Mr. Maher said, the bar somehow survived.

“That was the end of an era,” he said, “but it hasn’t changed McSorley’s.” If anything, he said, publicity over the lawsuit benefited business.

“When I started working for him full time 26 years ago, I was McSorley’s first female bartender and a little nervous going in — wondering what the old-timers would say or think,” his daughter Teresa said. (Her husband, Gregory, is an artist and bartender there, too.) “But my father said these words to quell my concerns: ‘Teresa, just tell them you’re about your father’s business.’ And so, I am. And continue to be.”