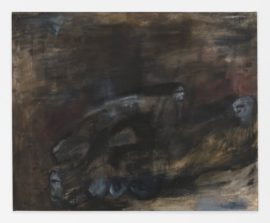 A small sign outside “Nancy Spero: Paper Mirror” at MoMA PS1 says “this exhibition may not be suitable for all audiences.” Fair enough, since the show contains some abstract, impressionistic depictions of Vietnam War atrocities and some garden-variety nudity. But when you think of the importance of her work in this moment, the sign also feels like a contradiction: The show should be mandatory viewing, especially for women. These works not only illuminate how history repeats itself but also how discrimination against women has been embedded in art, literature and culture since the ancient world.

In more than 100 paintings, prints and collages made over six decades, Ms. Spero (1926-2009) artfully tackled the issues of her day, yet the pieces feel shockingly relevant to our own moment. The show starts with her “Black Paintings” (1959-65), moody canvases with human figures engulfed by their murky backgrounds. Ms. Spero made these, often working at night, while living in Paris with her husband, the painter Leon Golub, and their three children. After that she moved onto the “War Series” (1966-70), drawings in which she registered her opposition to the war through art. In these smaller, more immediate works, frenetic and scrawling marks replicate the violence of the battlefield and what she called the “obscenity” of war.

The show really lifts off after 1974, when Ms. Spero decided to make women the sole focus of her work. She often printed images directly onto walls by using rubber plates. At PS1, the galleries are filled mostly with paper prints that have been stamped and scattered across the walls. There are friezes near the ceiling and works hovering over the floor, recalling ancient ruins where you might stumble upon an uncanny fresco fragment. 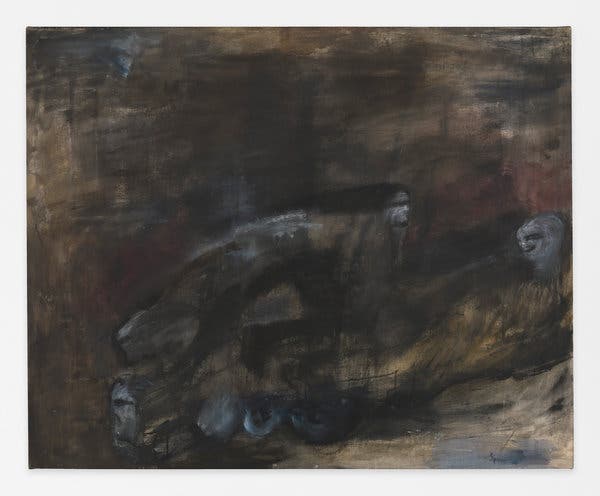 After 1974, her depictions of women ranged from the primordial — with women opening their vulvas to the viewer (a suitably “unsuitable” image, perhaps) — to Greco-Roman (elegant warriors and goddesses). Printed texts accompanying the images call for abortion rights or relate a sharp exchange between John Adams, second president of the United States, and Abigail Adams, his wife and adviser, in which she criticizes the “tyrannical” nature of men and Mr. Adams’s support of “masculine systems.”

Ms. Spero particularly embraced the “Gorgons, Sirens, Mothers of Death and Goddesses of Night who rejected passivity and silence,” as one work proclaims. Paradoxically, the focus on goddesses ran afoul of postmodern feminists who felt the goddess was too limiting and “essentialist.” (“I’d rather be a cyborg than a goddess,” the celebrated cyber-feminist Donna Haraway wrote in 1985.) But the tide is turning, and in addition to Ms. Spero’s profound influence on — or affinity with — artists like Kiki Smith and Nalini Malani (and the writings of Silvia Federici, who has recounted the history of witch hunts), these figures are once again being embraced as heroines and revolutionaries.

Beyond the PS1 galleries and the general art world, Ms. Spero’s work feels stunningly radical, topical and inspiring. Perhaps it’s not suitable for the very young. But if you’ve reached the age (say, ripe adolescence) in which you’ve become aware of life’s profound injustices and their artistic and historical roots, “Paper Mirror” is full of stunning images, texts, outrage, insight and the deep commitment to using art to fight against inequality.