Love Is a Battlefield 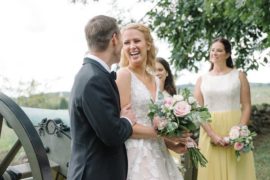 Even as a young girl growing up in St. Charles, Mo., Loren Voss had a strong interest in politics and public service, and she wasn’t afraid to speak up for causes she believed in.

“She’s into the rights of humans and animals,” said Debbie Voss, her mother. “When she was young, we used to go around to grocery stores and she had her PETA stickers. We put PETA stickers on all the lobster tanks.”

After graduating from the University of Pennsylvania in 2008, Ms Voss, who is 34, spent nearly five years as an intelligence officer in the Air Force, providing intel about foreign threats and firepower to American pilots. “She was always very intense,” said Peter Lee, a pilot who worked with her at the Royal Air Force Lakenheath base in England. “She was willing to state her opinion and position and defend it. She was plenty vocal.”

On June 5, 2018, Ms. Voss was walking through Chinatown Park in Washington, where she now works as a senior adviser in the Department of Defense, when she noticed a man reading on a bench. “I thought, ‘Oh, there’s an attractive guy and he’s reading a giant book,’” said Ms Voss, who received a master’s degree in global affairs from Yale and a law degree from Harvard after leaving the Air Force. She likes giant books.

Walking closer, she realized the man was reading “This Kind of War,” by T. R. Fehrenbach, published in 1963, which she described as “a seminal book on the Korean War” and one she has read many times. Ms. Voss, who has a particular interest in the laws surrounding armed conflict, stopped and introduced herself. “I told him I had it on my bookshelf with little notes and tabs in it,” she said.

Art Moore, 41, is a lieutenant colonel in the Virginia Army National Guard and was immediately — but not overtly — impressed. Slim as a long-distance runner, he graduated from West Point and has a stoic demeanor combined with an under-the-radar sense of humor and even goofiness. He has always been interested in military history and military life.

“He was the only kid I knew who had all his G.I. Joes in the original packages,” said Griffin Reome, who grew up with him in Auburn, Calif. “He was always very detail oriented. He was always a guy of service, very driven when it came to helping others.”

He and Ms. Voss ended up discussing everything from the differences between the Army and the Air Force to her love of Halloween and Rip It, an energy drink popular among soldiers.

“He asked for my phone number, but then he was like, ‘Oh, I really have to get back to reading this book,’” she said. “I thought maybe I said something off-putting. I actually texted my friend saying, ‘I just met this guy and we had a really good conversation but I don’t think he’s going to text me. She was like, ‘Oh, it’s fine. Go home and have a glass of wine.’”

As it turned out, he texted her a few hours later and also sent her an article about Rip It from Duffel Blog, a satirical blog covering military topics. Since then, they have spoken every day.

“It was different than anything I’d experienced before,” Mr. Moore said. “She really captured my attention right away and I didn’t look back. A month later, we were serious and a little after that we were visiting each other’s hometowns and talking about where we wanted to get married.”

Mr. Moore created an Excel spreadsheet outlining the important moments in their relationship. For their first date, on June 24, 2018, she invited him to a Civil War re-enactment at the Winery at Bull Run in Centreville, Va. “We’re both history buffs, war history specifically,” she said. They began reading books about the Civil War together and analyzing speeches by Abraham Lincoln and other late-19th-century politicians. “We didn’t have a whole lot of superficial conversations,” she said. “We just kind of dug into it right away. My idea of the person I wanted to marry was someone I could have these conversations with.”

She carries a notebook and pen everywhere, just in case she comes across an interesting statistic or idea, and he does the same. “One of the things I liked about him was I could take him to nerdy events in D.C.,” she said. “We went to a lot of events about the Supreme Court and their upcoming cases.”

Ms. Voss has always said she’s more interested in public service than making a lot of money, which strongly resonated with Mr. Moore.

“She’s down to earth,” he said. “She grew up without a lot of means so she has a lot of empathy. She’s very much for the underdog. She’s very accomplished, but it’s all based on hard work and her own initiative.”

Mr. Moore, who describes himself as a moderate Republican, ran for a seat in the Fourth Congressional District of California in 2014. He lost but hopes to be elected to public office in the future. “He really jumps for the brass ring,” said Emile Buzaid, a West Point classmate. He described Mr. Moor as ambitious and modest at once, which was how many of Ms. Voss’s friends also characterized her.

As they got to know each other better, Ms. Voss, a Democrat, tried to encourage him to eat tofu (she’s a vegetarian; he’s not) and he motivated her to be more organized. “One reason I know this is the real thing is it’s the first time someone has said, ‘You’re messy, you’ve got to work on it’ and I’m like, ‘O.K., that’s valid, I’ll work on it,’” Ms. Voss said.

She added, “He makes me laugh, which is really important. When we first met, I thought he was very serious and I was actually worried he didn’t have a sense of humor. But he knows how to have fun. He’s the kind of person if you passed a playground, he would go down the slides with you.”

In late November, they visited his parents, William and Gayle Moore, in Auburn, and followed a five-page itinerary Mr. Moore had created. It included a long hike in the redwoods, which Ms. Voss loved. “I grew up in Missouri so we were always climbing through creeks and what not,” she said.

The couple, who are both very knowledgeable about armed conflict, established clear regulations for their own personal conflicts. “We have ground rules like, ‘These type of things hurt my feelings so don’t say those things,’” she said. “We never stop a fight and just end it. We always come to a resolution.”

On Feb. 16, he proposed at the Lincoln Memorial in Washington. “Can I tell you how I knew the proposal was coming?” she said. “Right before we leave, he looks at my hand and says, ‘They’re a little dry, do you think you should put lotion on?’ I was like, ‘O.K., I know what’s happening now.’”

The pair married Aug. 24 at 11 a.m., at the Church of the Abiding Presence in Gettysburg, P.a. The church sits on open land where intense fighting took place on July 1, 1863, the first day of the three-day Gettysburg Battle.

The only person wearing an Army uniform was the officiant, Mark Tinsley, who met the groom when he was a chaplain for the Virginia Army National Guard. Although the bride’s parents, Debbie and Donald Voss, were among the 72 guests, the bride walked down the aisle alone, slowly. “I wanted to show my independence,” she said.

The couple wrote their own vows, but whispered them to each other so no one else could hear what they were saying. It was as if the volume had suddenly been turned off and they were lip syncing. “I was like, ‘Man, I really want to hear Loren talk about feelings,’” said Alisha Martell, a bridesmaid. “In all the years I’ve known Loren, I’ve never heard her talk about emotions or feelings.”

After the ceremony, guests boarded buses for a tour of the enormous battlefield, which is now decorated with monuments, statues and plaques, almost like an art installation. The bus passed Civil War-era fences that had sharp wooden spears as long as surfboards laid across them and cannons in their original positions. In Gettysburg, cannons attract tourists the way buffalo do at Yellowstone National Park.

Still in her billowy wedding gown, the bride got on and off the bus several times, navigating between boulders and down dirt paths to get a better view of the sights. At times, she appeared to forget she was in a wedding dress. “She’s like the anti-bridezilla,” said Tera Brostoff, the matron of honor. “She’s completely undemanding. She doesn’t expect you to fawn over her.”

Later, everyone gathered for dinner, lawn games and a bonfire at the Battlefield Bed and Breakfast, which has many Civil War artifacts, along with ponds, cats, horses and a barn where dinner took place.

When asked about the way they met, the couple said they didn’t have anything particularly fancy or quotable to say. “I’m just happy I was familiar with the book,” Ms. Voss said. “Otherwise, I would have just walked by.”

Where Church of the Abiding Presence, Gettysburg, Pa.

Giant Books Dinner was served in an early-19th-century hay barn that was converted into a field hospital during the Gettysburg battle. The centerpiece at each table was a stack of books with titles like “America: Great Crises in Our History Told by Its Makers” and “The Essential Wisdom of the World’s Greatest Thinkers” from the couple’s collections. They were large, old, hardback books with beautiful covers, as detailed and distinctive as vintage cars.

Untraditional Topper The wedding cake, a salted caramel brownie cake, had at its top miniature figures of a man and woman sitting on a bench, a replica of the scene when the bride and groom first met on a park bench.

Battlefield Letter During the ceremony, Brian Jagger, a high school friend of the groom, read a letter written by Sullivan Ballou, an officer in the Union Army, to his wife days before he died in the Battle of Gettysburg. “Never forget how much I love you,” he wrote, “and when my last breath escapes me on the battlefield, it will whisper your name.”