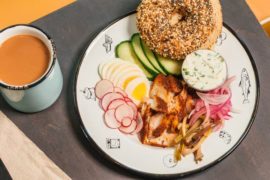 ASHEVILLE, N.C. — If you were wagering on two of the most unlikely words to be paired in the English language, “Appalachian” and “bagel” would be a pretty good bet. And yet, that is exactly what you find at Button & Co. Bagels here in Asheville.

The chef Katie Button, a native of New Jersey who made her name cooking Spanish food at her nearby restaurant Cúrate, makes the dough with locally milled, soft wheat flour — bolstered, because it must be, by higher-gluten stuff from the North — and sorghum syrup. The rings are hand-shaped, then boiled in water laced with more sorghum to give them a shiny, chewy crust.

Ms. Button knows a good bagel. She could have recreated a New York or Montreal version here. But she had an agenda: “I wanted to give the menu a sense of place.”

Indeed, almost everything on the menu gives a nod to local traditions or ingredients. The sable is cured with sumac, also called “mountain lemon.” There is one cream cheese made with ramps, another with smoked mountain trout. And Appalachia just might have New York beat when it comes to sweet bagels. Ms. Button’s version of the (often maligned) cinnamon raisin is swirled with dried figs and sorghum.

When Americans beyond the region think of Appalachian food — if they think of it at all — they may think of beans and cornbread, or that old stereotype, squirrel. In fact, the region’s foods are far more varied. German, Italian, African-American and Cherokee influences are present in many dishes, and practices like foraging, canning and preserving, which have captivated urban food lovers in the past decade, have always been and continue to be a foundation of Appalachian foodways.

The effort to brand Appalachian food has been on a slow simmer for years. Since 2013, a small but dedicated band of academics, chefs and farmers has hosted a food summit to celebrate and raise awareness of culinary traditions. In 2017, the cookbook author Ronni Lundy won two James Beard awards for her love letter to Appalachia, “Victuals.” (Though the Appalachian Mountains run from Georgia to Canada, Appalachian cuisine refers primarily to the foods of its central region, which stretches from Tennessee through North Carolina, West Virginia and Ohio.)

Next year, the chef Sean Brock, who is originally from southwestern Virginia and gained fame for digging into Lowcountry culinary traditions in Charleston, S.C., plans to open a cutting-edge center in Nashville dedicated to exploring Appalachian cuisine. The project includes two restaurants: Red Bird, which aims to be a kind of Chez Panisse for Appalachian cooking with a menu that changes daily, and Audrey, a modern restaurant fueled by a research-and-development kitchen headed by a former researcher at Noma’s fermentation laboratory in Copenhagen.

Asheville chefs already have dived in. Look around the city today and you’ll find echoes of Appalachian traditions, and modern spins on them. AUX Bar, a diner-meets-dive bar, serves vinegar pie, a regional spin on a citrus pie that substitutes acidic vinegar for the lemons that were once hard to come by in the mountains. Chai Pani, an Indian street-food restaurant, offers specials like dal with collards and country ham. The chef and restaurateur John Fleer, a pioneer of new Appalachian cooking, last year opened a restaurant, Benne on Eagle, that focuses on “Affrilachian” food, the cuisine of African-Americans in Appalachia.

This weekend, the city will host some 2,000 people at Chow Chow, a new festival named for the pickled relish. Organizers hope it will serve as a public coming-out party for modern Appalachian cuisine.

“People’s perceptions aren’t changing as quickly as the culture does,” said Meherwan Irani, Chai Pani’s chef-owner and a member of the festival’s board. “At what point does perception catch up? It’s when we get vocal about it.”

The perceptions about Appalachian food start at home. Graham House, the chef at the ambitious, vegetable-focused restaurant Sovereign Remedies, grew up about an hour outside Asheville and couldn’t wait to get away. He lived in northern Italy and Northern California, places known for attracting serious cooks.

Over time, as Asheville became a food destination, he began to see it through new eyes. “I didn’t respect it as much as I should have,” Mr. House said. “I’d talk about the morels and chanterelles of California; when I got home, I pulled into the driveway and found 10 pounds of black trumpet mushrooms.”

Sovereign Remedies was first and foremost a cocktail bar when Mr. House took over the kitchen in late 2016. With pale green walls, floral love seats and a tangle of lush plants at every turn, the second-floor dining room looks as if it has been reclaimed by Mother Nature.

Mr. House’s menu reflects the vibe, relying heavily on wild plants and herbs: tender miner’s lettuce, crunchy knotweed, mushrooms and wildflowers. One night this spring, there was a dish of pappardelle in a bright, lemony sauce under a shower of crispy sunchokes and quince petals. This summer, he served local peaches over a smear of tahini, made with wild daylilies, and radish pods that had been pickled in a vinegar infused with wild nasturtium and roses.

“Honestly, we chuckle at the term ‘farm to table,’” said Mr. House. “Appalachian cuisine has always relied on what was available.”

Mr. Fleer, in contrast, is a revivalist. In the 1990s, as a young chef at Blackberry Farm, a resort in eastern Tennessee, he all but invented what is now referred to as “foothills cuisine,” seeking out artisanal country producers and putting them on his menu — and on the culinary map. He was early customer of Allan Benton, now perhaps the nation’s most famous country ham producer, and Cruze Farm, a dairy beloved in the culinary world for its buttermilk.

When he opened his first Asheville restaurant, Rhubarb, in 2015, Mr. Fleer took the opportunity to expand his menu beyond mountain ingredients. (He now serves oysters with that Benton country ham.) But at Benne on Eagle, he has again sought to promote unsung traditions, in this case the culinary influence of African-Americans on Appalachian cooking.

Benne on Eagle sits on the Block, which was until the 1970s a thriving black business district. To create the menu, Mr. Fleer hired Ashleigh Shanti, a 29-year-old chef who grew up in Virginia Beach, and, to guide her on local traditions, Hanan Shabazz, a beloved chef whom residents remember from the days when she sold sweet apple fritters on the Block.

“I call her Miss Hanan; sometimes I call her Grandma Hanan,” Ms. Shanti said. “She’s been incredibly influential to me.”

Together, the women are defining the cooking of African-American Appalachia, weaving together old recipes and food memories with West African influences and techniques. The result is a menu with dishes like pork ribs rubbed with a peppery sauce made from ogbono (wild bush mango), and braised rabbit and onions paired with Ms. Shabazz’s famous apple fritters. Ms. Shabazz comes in herself three times a week — she would come more but for arthritis pain — to make her fish cakes and a traditional sweet bean pie.

Asheville may be the epicenter of the Appalachian food movement, but the most anticipated entry into the category is in Nashville, where Mr. Brock plans to open his cultural center and two restaurants early next year.

Red Bird, Mr. Brock said, will offer a style of cooking inspired by no-frills French country restaurants, with Appalachian food that is “honest, simple and pure.” The menu will be short, in an effort to create a more relaxed environment for the cooks who work there. (Mr. Brock, who had a public struggle with alcohol, sees this as part of his commitment to helping to change the hospitality industry from within.)

By contrast, Audrey, named for Mr. Brock’s grandmother, will “explore what modern Appalachian cookery can look like,” he said. Audrey will have around 30 seats and a multiple-course tasting menu.

“The food will appear to be the simplest thing you’ve ever seen, but the flavor will blow your head off because of the work that’s done in the research-and-development kitchen,” Mr. Brock said. “It’s the way I’ve always looked at food, but it’s laser-focused on Appalachia.”

At the Chow Chow festival this weekend, visitors will have a chance to taste traditional Appalachian foods and meet with farmers and craftsmen who are pushing them in new directions. There will be workshops on biscuit-making and pickling, a seminar on locally grown flours and how to bake with them and a guided historical tour of the Block.

This conversation about Appalachia, Mr. Brock says, is a first step toward a more nuanced understanding. Ten years ago, many people thought of Southern food as one, monolithic cuisine. “Now, we recognize Southern food’s diversity, its microregions,” he said. “My hope is that this will start that for Appalachia.”

FacebookshareGoogle+sharePinterestpin it
New French Cream Puff Store Opens on the Upper West SideMedical News Today: What causes bumps in the back of the throat?
Latest