Long Before ‘Drag Race,’ There Was Mr. Dan 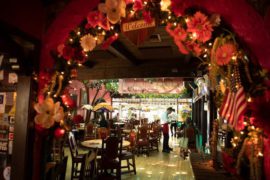 LOS ANGELES — Even to introduce a stage show in which he does not appear, Mr. Dan sure knows how to make an entrance.

Not long ago, to the sounds of “Fat Bottomed Girls,” by Queen, he hustled out from behind a tattered curtain onto a makeshift set made to look like the Miami living room of “The Golden Girls.” He played air guitar, strutted and finally twerked: leaning on the coffee table, his man-caboose high in the air, like a middle-aged exotic dancer unleashed upon thrift-shop rattan.

It was a lot to take in on a Thursday night in the basement of a Mexican restaurant. But at the Cavern Club Celebrity Theater in eastern Los Angeles, a hotbed of drag performance that is actually as well as figuratively underground, it was just business as usual. Week in and week out, Mr. Dan is the well-rehearsed host and Svengali of this speakeasy in Silver Lake.

“Am I the producer? Am I the director? Am I the ingénue?” he wondered rhetorically in an interview. Officially, he is the artistic director, and this month is his 25th year in a position that sometimes has required him to be all three.

His last name (Der Kacz) long ago put in mothballs — along with his drag alter ego, Gina Lotriman, and the desire to star in shows himself — Mr. Dan, 59, spends his time programming, sometimes nurturing, and always introducing his theater’s productions.

On this night, he was presenting “The Golden Girlz,” a sitcom spoof starring the top-shelf drag stalwarts Jackie Beat and Sherry Vine, and the frequently cross-dressing character actors Drew Droege and Sam Pancake. Admission was $35. 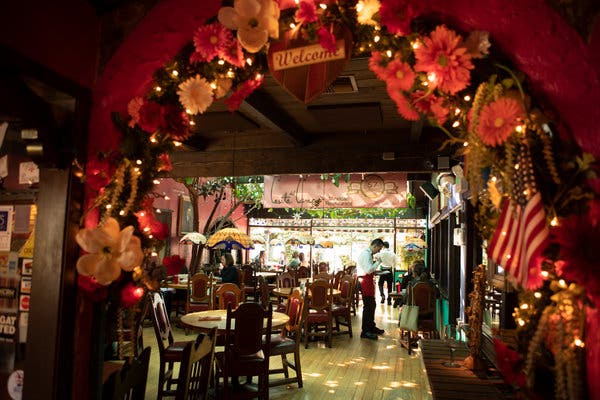 Casita del Campo, the family-owned restaurant above the club.CreditJessica Lehrman for The New York Times

A Pillar of Performance

No matter what show Mr. Dan is offering, whether a dance piece by the hirsute honey known as Love, Connie; the bold comedy of the New York-based improv trio Unitard; or a variety offering by the drag wonder Varla Jean Merman, visiting from New Orleans, Mr. Dan begins his spiel by pointing out that the theater’s low ceiling is supported by a single pillar.

“If there were an earthquake, you would die under a pile of old Spanish-style wooden chairs and tortilla chips from upstairs,” Ms. Beat said.

Despite that dire prediction, when Mr. Dan speaks of that sturdy post, he could just as easily be talking about himself. Since 1994, he has held up the 55-seat theater, one flight below Casita del Campo, a family-owned Mexican restaurant — and, in so doing, become practically as popular as his roster of stage performers.

“He’s an appealing, jovial host, and he has dirty jokes that he’s told for years,” said Lady Bunny, the veteran New York drag star, in a phone interview. “Performing at the Cavern Club just feels like home.”

Loyal crowds, sometimes peppered with such megawatt celebrities as Bette Midler, Liza Minnelli and Katy Perry, tend to agree. Ms. Midler, for instance, was observed taking in, and complimenting, the appealingly tragic stylings of the Seattle-based chanteuse Dina Martina.

“We’ve always tried to cultivate an audience that would appreciate our weird brand of drag,” Mr. Dan said.

The acts he chooses to showcase are not generally the glamour girls of “RuPaul’s Drag Race,” although Alaska 5000, who won “Drag Race All-Stars,” did guest-star in an installment of “The Golden Girlz.” Instead, his headliners tend to be more outré artists like Ms. Pak-Man, who is a gonzo gamer queen, or the lovely Kay Sedia, who recently appeared in a “Juan woman cho,” as she spelled it.

The wackiness of the performers withstands the noise from above. “It’s like a gay Chuck E. Cheese upstairs,” he said. “You get ‘Happy Birthday’ and banging on seats. You don’t want to be in the middle of ‘Hedda Gabler’ with that going on. It’s got to be gay and campy.”

His first hit was an improvised soap opera parody set in a Hollywood trailer park, called “The Plush Life,” which ran for much of the ’90s. “We were sold out every Saturday night,” said Jeffrey Wylie, an actor and director who played Skip Tumehlou in that fondly remembered sudser. “There were people who came to the show every week for the entire 10 years.”

Since that initial success, Mr. Dan has presented such popular shows as “Chico’s Angels,” a series of jiggly cop satires that recently celebrated its quinceañera, and “Fruitcake Follies,” a holiday show that, every Christmas, packs in rum-soaked revelers like so many sugarplums. Tom Lenk, a “Buffy the Vampire Slayer” alum and Instagram fashion sensation, brought “Tilda Swinton Answers an Ad on Craigslist,” a smash at the Edinburgh Fringe Festival, there in May.

There were lean times for Mr. Dan, to be sure. Originally from Detroit, he moved to Los Angeles in 1989 after scraping by for several years in Boston. There, he had befriended Paul Vitagliano, a club and radio disc jockey known as DJ Paul V, who shared his love of music, kitsch and drag, and who became an early accomplice.

Mr. Dan and Mr. Vitagliano together began hosting club nights in Los Angeles that celebrated their fascination with both the cornball and the cool. These early parties, like a TV-themed night called “Mystery Date,” offered punky queer people an alternative to more typical L.G.B.T. bar fare.

Their ideas were fun, but drawing a crowd wasn’t easy.

In January 1993, though, the two began throwing raucous, themed shindigs at Rudolpho’s, a Mexican restaurant owned by the same family that owns Casita del Campo. Called Dragstrip 66, the parties were costume-heavy club nights that offered drag fans a place to let down their Dynel.

The Los Angeles Times described the monthly festivities there as falling “somewhere between a John Waters film, a Bob Mackie fashion show, and a drunken punk dance party.”

Dragstrip 66 ran for almost 20 years. Mr. Vitagliano, now a blogger writing about L.G.B.T.Q. issues and editor of “Born This Way,” a 2012 compendium of coming-out essays, is at work on a documentary film — a “frockumentary,” he called it — to chronicle its history.

Dragstrip lay the foundation for the goings-on at the Cavern Club. “We welcomed outsiders, but only if they heard about it from insiders,” Mr. Vitagliano said. “We never wanted every person — we wanted the right person to come.”

Today, Mr. Dan’s theater doesn’t do much advertising, save for social media posts by the performers appearing there. “Staying under the radar gives the audience a sense of danger,” Mr. Vitagliano said. “People love that they’re experiencing what feels like their little secret.”

The popularity of the downstairs showroom has been a boon for the restaurant above, of course. Many audience members arrive for dinner or a round of margaritas at Casita well before curtain time at the Cavern Club.

The synergy, said Robert del Campo, the second-generation owner of the place, “has been an amazing experience. Everybody is having a great time, so the energy is always happy in this place. There’s so much laughter all the time.”

And in a town where fame sometimes seems to be the universal goal, Mr. Dan is pleased that he has made his mark, if not in all of Los Angeles, then at least one corner of it. “People have referred to me as the gay Barnum of Silver Lake,” he said. “But I’m just leading a quiet life booking one tiny theater the best way I know how, trying to make it a success every night we’re open.”

Still, after 25 years, Mr. Dan remains committed to keeping the Cavern Club on the artistic down low. He is not programming for the mainstream, not even for those who prefer their drag of the VH1 variety, but for his own bewigged tribe of fringe-loving (and sometimes fringe-wearing) misfits.

“Everyone’s welcome,” he said. “But really this is just for us.”

FacebookshareGoogle+sharePinterestpin it
A Dad by Any Other NameMeasles Outbreak: N.Y. Eliminates Religious Exemptions for Vaccinations
Latest