Live-Streaming Your Broke Self for Rent Money 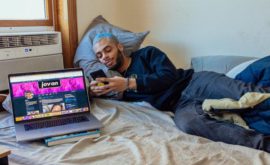 Jovan Hill, 25, dropped out of college and is unemployed. So how does he pay for his Brooklyn apartment and marijuana habit? His social media followers chip in.

On a lazy Sunday in September, Jovan Hill, a 25-year-old unemployed man in Brooklyn, had a small ask for the 7,100 strangers watching him on the live-streaming app Periscope: He needed $7,000, quickly.

“Good morning, girls and gays,” Mr. Hill said, recording with an iPhone in one hand and smoking a marijuana blunt in the other. He wore a faded pink T-shirt, gray gym shorts and black Nikes. A black Pomeranian and two roommates could be spotted in his messy bedroom somewhere in the neighborhood of Carroll Gardens.

In the rambling seven-minute video, he talks about wanting to move to Los Angeles (“This city just breaks you, I’m so bored of being broken”), spars with viewers who leave nasty comments (“I love all of you so much”), smokes his blunt and repeatedly asks for money.

“I’m very poor today,” he said. “So if you want any tax write-offs, please donate to the Jovan charity.”

Within minutes, the donations started flowing into his Venmo and PayPal accounts. 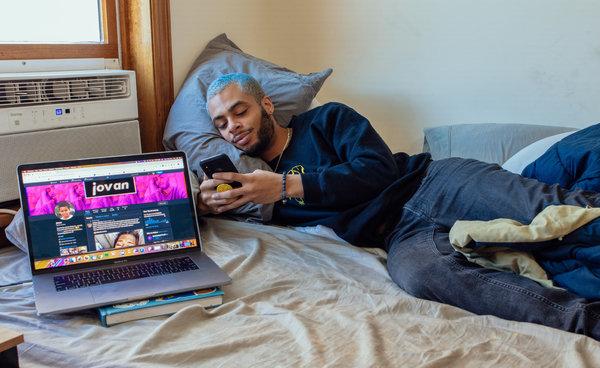 Jovan Hill at home in Brooklyn, where he live-streams his day-to-day existence to make money.CreditGioncarlo Valentine for The New York Times

By turns manic, flamboyant and sarcastic, Mr. Hill describes his output of live-streamed videos as a “gay, broke diary” that is inspired in equal parts by 4chan (the anonymous, often vulgar online message board) and his identity as a queer black man.

“Like if a sloppy Tumblr blog and a 4chan thread had a mistake of a child,” he said.

But to his 200,000 followers, spread across Periscope, Twitter, YouTube, Instagram and Patreon, Mr. Hill is not just another social media influencer seeking to leverage his microfame into money. His unscripted live-streamed show gives a raw, unfiltered window into the life of a bipolar 20-something striver, trying to eke out a meaningful existence without the crutch of family money, or a traditional job.

“The only reason I wake up and go to work everyday is so I can give @ehjovan money for rent,” said Paige Wolfe, 23, a bank associate in Oklahoma City, in a tweet earlier this year.

Fans like her have allowed Mr. Hill to cover his $1,300 monthly rent and living expenses, which include marijuana, help for his mother, video games and a $100 monthly budget for thrift store T-shirts.

Mr. Hill is flummoxed by the generosity. “When I talk to friends who have known me for a long time, they could never understand sending a random person money, and I kind of feel the same way,” he said. “But it’s a community. A community based around me.”

Mr. Hill grew up in Missouri City, Tex., with 11 siblings and was raised by a single mother who was a Jehovah’s Witness. He retreated to online message boards and interactive role-playing games like MapleStory, where he would troll other players (often with nasty comments like “fatherless”).

But as he got older, he shed his online anonymity and joined Tumblr, where he documented his life as a gay high schooler raised in a religious household.

The generosity of his followers first came to light in 2016, when his grandmother’s power was turned off because of unpaid bills. “I was panicking because my grandma is my life,” he said. He asked his followers for help, thinking he might raise a few hundred dollars at best. They sent him the full $3,000.

Why doesn’t he get a real job? “I made this my job,” Mr. Hill said. CreditGioncarlo Valentine for The New York Times

“That was the first time I realized my followers care about my well-being,” he said.

Mr. Hill’s Tumblr following grew while he was studying at Texas State University, but he did not lean on them financially until this year, when he had a “manic episode” in January over a bad breakup and dropped out of college a few credits shy of graduating.

With $22 in his pocket and a plane ticket his mother bought him, he came to New York City to start over. He moved into a basement apartment in the Crown Heights neighborhood of Brooklyn with Jake Garner, another live-streaming influencer, who he met through Tumblr.

Mr. Garner had their first month’s rent covered, but neither had regular income, so they began asking their followers for help.

“We basically came to an agreement where it was like, if you want me to be sitting in my room and going live every day, you need to pay my rent,” Mr. Hill said. “At first that was like $300 to live in a basement, but then they wanted me to have a better life.”

Mr. Hill got a job at a concession stand at a Chelsea movie theater but quit after a few weeks, never bothering to pick up his last paychecks. “I was making less money at the movie theater than sitting in my room live-streaming five times a day,” he said. “So why go to work?”

He now makes upward of $4,000 a month, he said, through a mix of social media platforms. In addition to his call-outs on Periscope, he entices followers to pay $1 a month to unlock videos on Patreon, a subscription platform. He has also figured out how to raise funds through Twitter, by posting screen shots of Venmo donations to shame and entice fans to give more.

Viewers occasionally ask him why he doesn’t get a traditional job, to which he replies: “I made this my job.”

Mr. Hill is part of an emerging category of micro-influencers who have discovered there is a paying audience that wants to watch them go about their day-to-day lives. Many have been able to make money on Patreon, where people can sell subscriptions for their content, whether it be about comics, travel or nothing at all.

Riley Whitelum, 34, and Elayna Carausu, 24, for example, have nearly 2,400 patrons paying $3 a month or more to watch them sail around the world on their channel, “Sailing La Vagabonde.”

And then there is Paul Denino, 24, who goes by the avatar “Ice Poseidon” and live-streams for hours a day on Periscope, Twitch, YouTube and other platforms. For this, he can make some $60,000 a month, he said in a recent profile in The New Yorker.

While Ice Poseidon has some 730,00 YouTube subscribers, many live-streamers have a few thousand at most.

“Pop culture is so boring now compared to what it used to be, so a lot more people are clinging onto people online,” Mr. Garner said.

During a 10-minute Periscope live stream from his parents’ home in suburban Delaware last month, Mr. Garner chatted about what brand of water he drinks, his favorite video games and whether he dyed his hair.

Mr. Garner often streams with Mr. Hill as a duo, and the two are now making more money than they know what to do with, they say. “I know we can invest, but we hate capitalism,” Mr. Hill said.

These days Mr. Hill live-streams on Periscope about three times day, in segments that range from 10 to 30 minutes, often from his Brooklyn bedroom and occasionally on walks around Park Slope or at friends’ parties.

Armed with his shaky camera (usually an iPhone), he rants about pop culture news, laments his childhood and commiserates about his hookups. He also smokes weed, eats quesadillas, plays music, calls friends, hosts parties and kills time on the internet — not unlike what many aimless 20-somethings do in their spare time.

When he’s feeling punchy, he will spar with viewers. “Do something,” wrote a viewer with the handle @adiaa_z during a broadcast from his bedroom about four months ago.

“We’re sick of this shirt,” a viewer named @abriannaxcx said.

“You’re all such haters,” he said. “I’ve gone to your Instagram and I see you wearing the same shirt you’ve had since eighth grade.”

At least once, he asks for money. “I’ll do anything for $15,” he said in a recent video from Los Angeles, where he was streaming from an Airbnb. A few minutes in, a follower named Ashley requested “attention” for her $5 Venmo donation. “I love you, Ashley,” he said in a singsong voice.

He talks in bursts of inspiration, then mumbles through lulls, and frequently changes topics. Mr. Hill says he was diagnosed as manic depressive and does not take any medication for it, which may explain the mood swings.

“When I’m manic, I’m very impulsive, have no self-control, I waste my money, I have random, reckless sex,” he said in a video titled “Mania Periscope” from July, during which he said he was hyped up on Adderall. Then, as if remembering he has an audience, he added: “I didn’t ask anyone to follow me. You guys came out of nowhere.” (Mr. Hill later said he was being “a bit dramatic” and tries not be reckless.)

His non sequiturs can be trivial (“My face is so fat today”) or wry (“Why would I wear sunscreen? I came to this planet to die”). He uses racial and gay slurs freely, saying sarcastically in one video: “I’m homophobic because gays have done nothing but ruin my quality of life.”

Mr. Hill is also prolific on Twitter, sending more than 30 message a days under the handle @jovanhill. (His earlier account, @ehjovan, was suspended after he got into a feud with K-pop fans.)

His followers are enthralled. He has carved out a space where crowdfunding is a form of audience participation. When he went to Texas earlier this year for unpaid parking tickets, his followers sent him the money because they feared he might be arrested.

“I didn’t even care, but they started sending money, saying, ‘You can’t tweet from jail,’” he said.

FacebookshareGoogle+sharePinterestpin it
Kylie Thoman, Reid EllisonThese Men Are Waiting to Share Some Feelings With You
Latest