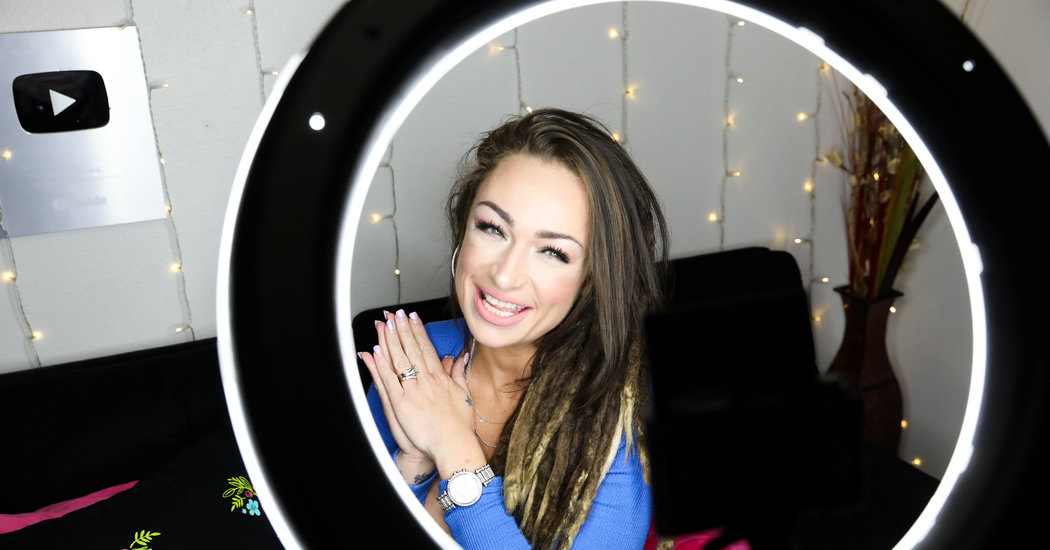 This article is part of our continuing Fast Forward series, which examines technological, economic, social and cultural shifts that happen as businesses evolve.

In May 2008, when Christina Randall was released from prison after serving nearly three years for battery, robbery and escape, she had nothing but $30 and the brand-new, ill-fitting clothes on her back. She took up in a women’s shelter in South Florida, eight hours away from her friends and family, with a plan to start fresh.

First, she got a job as a line cook at Wendy’s. “I worked my butt off cooking chicken nuggets and French fries,” Ms. Randall, 35, said, in order to save for a car. Then she enrolled in an undergraduate program, where she studied social work while employed as a janitor. “I’ve always wanted to help people,” she said.

But after graduation, she couldn’t get hired; history always seemed to get in the way. Once, she said, she was offered a role working with children, but the organization promptly rescinded the offer after running a background check. “I went home and cried for like three days,” she said. “I felt like I’d hit a brick wall.”

For a long time, Ms. Randall didn’t think she would ever get to do the work. Then she started a YouTube channel. In the three years since, she’s brought more than 400,000 subscribers — “my lovelies, my beauties, my friends,” as she calls them in her videos. She’s a lot like other creators in the lifestyle category, except that in addition to sharing beauty tips, wedding-day memories and unboxing videos, she also talks candidly about life behind bars and the process of re-entry.

Ms. Randall is one of a handful of former prisoners building an audience on YouTube. She has explained the “unspoken rules of prison,” showed her viewers how to turn coffee grounds and water into makeshift jailhouse mascara, and interviewed a former correctional officer about corruption among prison guards. But most importantly, she has offered an empathic, first-person perspective on incarceration.

“I have a lot of sons, mothers, daughters, fathers, aunts, uncles, grandparents of people in prison who watch my videos to understand better what the person might be going through,” she said.

Most of Ms. Randall’s viewers are American, in the 18-to-34 age bracket and women (92 percent, according to data from YouTube). Some of them send fan mail. Earlier this year, Ms. Randall received a note from a woman who saw her story as a cautionary tale. “I was starting to walk a bad path and I started to hang around the wrong sort of people,” the viewer wrote, “but seeing your videos and hearing your story helped me find the right path and better friends.”

Dr. Aaron Balick, a psychotherapist and the author of “The Psychodynamics of Social Networking,” said that there are “pros and cons” to people like Ms. Randall sharing their stories online with a potential audience of millions. “It offers access and insights into people’s experiences and stories that may be otherwise difficult to access,” he said. “This can increase an individual’s sense of belonging and inclusion, and decrease a sense of loneliness or isolation.”

“The downside,” Dr. Balick continued, “is that we cannot be sure about the narratives that are being produced. Are they honest? Are there commercial or other attention-seeking incentives that pull the story away from authenticity?”

Ms. Randall earns money from the ads that play alongside her videos, and also has about 270 donors on Patreon who each pay at least $5 a month for access to extra content. Her videos are now her main source of income, but she doesn’t believe that making money compromises her channel’s integrity. “My channel is raw and real,” she said. “I am brutally honest with these people.”

Patrons who pay Ms. Randall $50 a month get one-on-one Skype chats with the YouTuber, while those who pay $10 get priority when they private message her. Emily Salisbury, an associate professor of criminal justice at the University of Nevada, said she sees “nothing wrong” with Ms. Randall being financially compensated for her work, and that her online community could be invaluable for former prisoners.

“One of the things that oftentimes happens when somebody is released from prison is that they’re told that they can’t hang out with other known offenders. That really harms women in particular, because women are so relationally based,” Ms. Salisbury said. She also said that the videos, which have a casual, friendly feel, could be more effective than outreach programs led by professionals who may be perceived, by people who have been in the system, “as just not getting it.”

Since 1978, women’s incarceration has climbed at twice the rate of men’s in the United States, with 834 percent more women locked up than 40 years ago, according to a report from the Prison Policy Initiative. “There are far too many women who are incarcerated who don’t need to be,” Ms. Salisbury said.

Ms. Randall is passionate not just about changing the fortunes of individuals, but also changing the system. “We absolutely need prison reform, look at our recidivism rate,” she said. (According to the Bureau of Justice Statistics, from 2005 to 2014, five out of six state prisoners were arrested within nine years of their release.) “It’s labeled the Department of Corrections, but they’re not correcting anything,” Ms. Randall continued.

She is seen, by her subscribers, as both a truth-teller and a healer. Her own rehabilitation, she says, took place when a church group visited her prison in 2007.

“I remember thinking it was ridiculous,” she said. “Everyone was just standing up and singing about God, and I started feeling these tears well up in my eyes and thinking, ‘Oh heck no, I am not doing this.’ I didn’t cry when I was sentenced or when I went to prison. I was hard, I wasn’t going to cry. Now they got me in the church, are you kidding me?”

The process continued on the outside. About a year after her release, Ms. Randall reunited with one of her high school crushes and became a stepmother to his son Jordan, who is now 18. The couple’s second son, Jaden, is 8 years old and has his own YouTube channel, with 4,000 subscribers. He posts videos about regular kid stuff like school, as well as back-flip tutorials.

Viewed together, their channels present an optimistic but realistic view of re-entry. “It’s a beautiful life on this side,” Ms. Randall said. “I know. I’m living it.”

FacebookshareGoogle+sharePinterestpin it
A Pastry Chef’s Book, and Life, Start AgainAcne Studios and Mulberry Solidify Their Friendship With a Special Handbag Collection
Latest