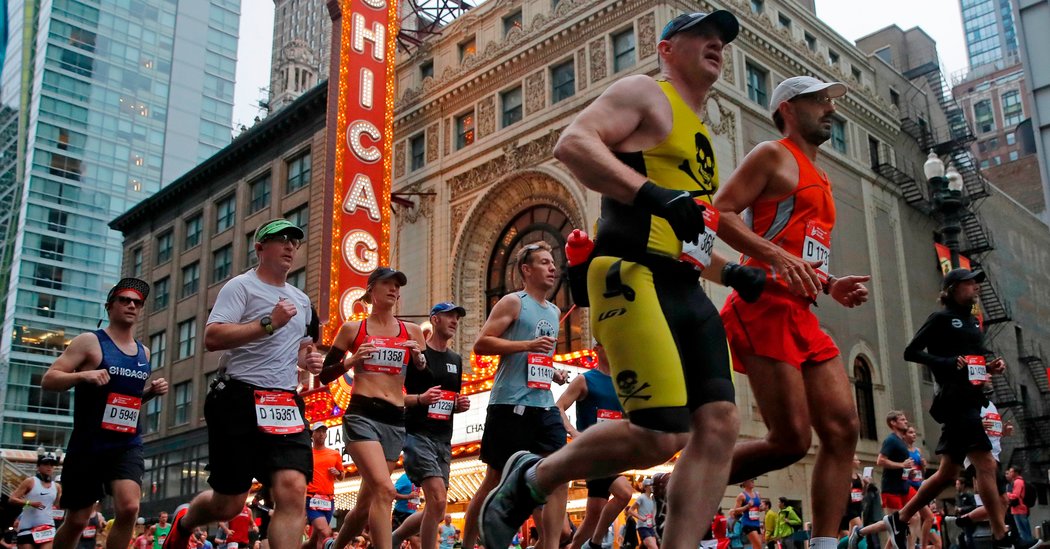 Welcome to the Running newsletter! Every Saturday morning, we email runners with news, advice and some motivation to help you get up and running. Sign up here to get it in your inbox.

Eliud Kipchoge of Kenya has done what a lot of people thought a human could not do: He ran a marathon in under two hours. Early Saturday morning, Kipchoge ran 26.2 miles in 1 hour, 59 minutes, 40 seconds. It’s not an officially recognized world record because it wasn’t a marathon like most of us know. It wasn’t a competition. Everything was engineered to help him break two hours, from the location in Vienna to the flock of pacers who helped him along the way.

It’s a dazzling achievement in sports history that may inspire runners in the Chicago Marathon and in future races to push themselves to new levels. If you missed it, you can watch the finish here. You also have two more special opportunities to watch running in the next few days.

The Chicago Marathon, a World Major marathon, is being run on Sunday starting at 7:20 a.m. Chicago time, which is 8:20 a.m. for East Coast viewers. The race is living in the fallout of Alberto Salazar being barred from coaching for four years by the United States Anti-Doping Agency. Two of his athletes, Galen Rupp and Jordan Hasay, still plan to run, as does the former Salazar-coached athlete Mo Farah. And that story just took another turn: This week, Nike said that it is shutting down Salazar’s elite training group, the Nike Oregon Project team.

The Times’s deputy sports editor, Matt Futterman, who is running the Chicago Marathon himself, wrote about the recent decision and had a longer article that ran this week about the toll it’s taken on whistle-blowers, including statements from Salazar. Expect some fireworks at pre- and post-race news conferences.

If you live in the United States or Mexico, you can stream the race live at nbcchicago.com. NBC Sports Gold will also be airing the race if you have a cable subscription. (If you are in Chicago, spectator information is here.)

On Monday, the documentary “Skid Row Marathon” is in theaters for one night only. It’s about a criminal court judge who started a running club on Skid Row in Los Angeles, and how running helped transform lives of members in the club. It won the audience award for best documentary film at the 2017 Los Angeles Film Festival. Here’s where to find out if there’s a screening near you.

For additional suggestions, sign up for our Sports newsletter. Every week, they round up the best of the best sporting events to watch.

And check out my story about a couple of guys who run around Brooklyn in tuxedo running shirts, taking photos of themselves with wedding couples. Writing the story was a good reminder that running doesn’t have to be all business. It can be fun too — and bring a smile to a lot of people’s faces.

It’s not the only thing you can do while running to mix things up, either. A lot of runners pick up trash while they’re running. It’s called plogging and, according to PBS NewsHour, started in Sweden. I’ve picked up trash while running before, but I’ve never done it in an organized fashion, as plogging is often done.

Have you tried plogging? Are there other things you’ve done while running to turn it into more of a game? Let me know — I’m on Twitter @byjenamiller.

Forward it to your friends, and let them know they can sign up here.

FacebookshareGoogle+sharePinterestpin it
68 Soups and Stews for Sweater WeatherWho Wants to Save the Las Vegas Wedding?
Latest