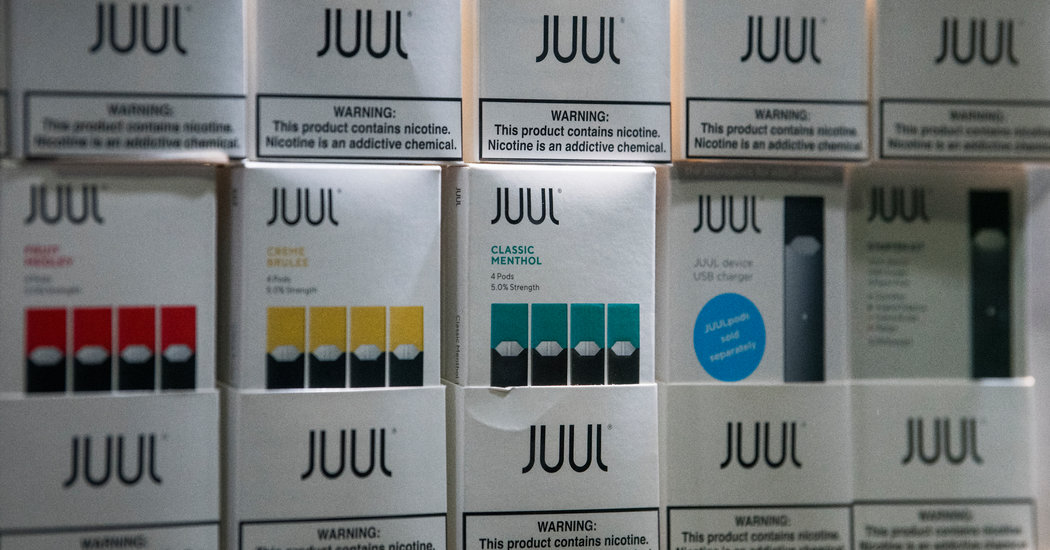 Juul Labs, the dominant e-cigarette company, violated federal regulations by selling its vaping products as a safe alternative to traditional tobacco cigarettes without approval from the Food and Drug Administration, the agency said in a warning letter on Monday.

The F.D.A. issued its warning amid a public health crisis over more than 400 cases of vaping-related lung illnesses that have hospitalized many young teenagers and adults, and possibly five deaths. Public health investigators have yet to determine a specific cause, but have cited the use of both cannabis-related and nicotine vaping products from a number of companies as possible suspects.

There is no indication from the warning letter that the F.D.A. has

The agency’s warning letter to Juul follows a lengthy inquiry into the company’s marketing and sales practices, as well as a review of congressional testimony from Juul executives, consumers — including students and parents — and antismoking advocates.

Under federal law, companies are not permitted to market products as safer than cigarettes or a safe alternative without proving those claims to the F.D.A.

But, the agency pointed to specific allegations that would show Juul in violation, including congressional testimony that a Juul representative spoke at a school presentation and told students that Juul “was much safer than cigarettes,” and Juul was “totally safe.”

The F.D.A. letter also warned Juul about a statement that had appeared on the Juul website, written by the company CEO, stating that the Juul vaping system is designed to “heat nicotine liquid and deliver smokers the satisfaction that they want without the combustion and harm associated with it.”

The F.D.A. stated that company “has engaged in labeling, advertising, and/or other activities directed to consumers, in which JUUL explicitly and/or implicitly has represented that JUUL products are free of a substance, have a reduced level of or exposure to a substance, and/or that JUUL products present a lower risk of tobacco-related disease or are less harmful than one or more other commercially marketed tobacco products.”

In a statement, a company spokesman said, “We are reviewing the letters and will fully cooperate.”

The F.D.A. also said it was especially concerned that testimony before Congress indicated that company representatives had appeared at schools, telling students that its e-cigarettes (electronic nicotine delivery systems) were safer than tobacco products. “Our concern is amplified by the epidemic rate of increase in youth use of ENDS products, including JUUL’s products, and evidence that ENDS products contribute to youth use of, and addiction to, nicotine, to which youth are especially vulnerable,” the agency wrote in the letter.

Earlier coverage
FacebookshareGoogle+sharePinterestpin it
Too Little Sleep, or Too Much, May Raise Heart Attack RiskTrump Spars With Chrissy Teigen and John Legend Over Criminal Justice
Latest