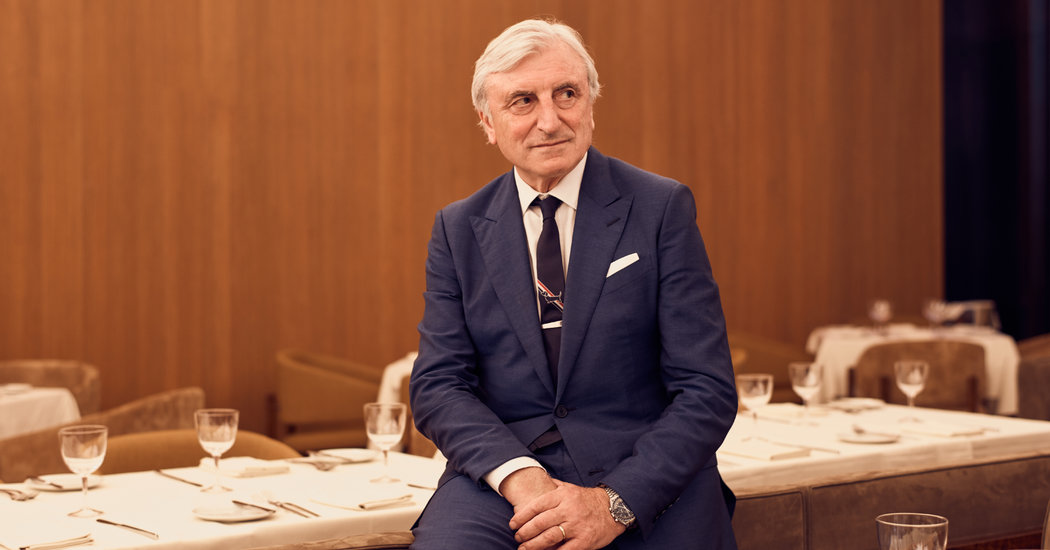 Julian Niccolini, the face of the Four Seasons Restaurant in Manhattan who for years had weathered sexual misconduct allegations, was forced to resign on Monday, the restaurant said in a statement.

Mr. Niccolini, 65, was told to resign by Alex von Bidder, a co-owner with whom he had operated the restaurant since the mid-1990s, according to the restaurant. The restaurant had been located at its original home in the Seagram Building for decades before it closed in July 2016 after losing its lease. It reopened four months ago in a smaller space on the other side of Park Avenue.

“It had been hoped that Mr. Niccolini would fulfill the agreement he made in 2016 to seek help and change his behavior during the Four Seasons’ two-year hiatus while the new restaurant was under construction,” the restaurant said in a statement on Monday. “In the short period of time since the restaurant had reopened, it had become clear that he had not honored that commitment.”

“Creating a warm and respectful environment for staff and patrons alike is central to the exceptional fine dining experience for which the Four Seasons has come to be known,” the statement added.

A spokeswoman for the Four Seasons declined to elaborate on what had happened since the restaurant reopened.

The terms of his resignation were unclear; it’s possible that a financial agreement could be worked out in the coming weeks.

Mr. Niccolini did not respond to a phone call and text message seeking comment on Monday evening. In September, Mr. Niccolini said he had “dealt with” the sexual assault allegations against him. “It is something of the past,” he told The New York Times.

Earlier this month, Pete Wells, the New York Times restaurant critic, reviewed the newly relocated Four Seasons, downgrading it to one star from the two it received in 2007 — not because of the food (Mr. Wells wrote that the restaurant is “better than it has been in years”) but because “Mr. Niccolini’s actions have done serious damage” to its ability to make a diner feel safe in an intimate space.

Alice McGillion, a spokeswoman for the Four Seasons, said Mr. Wells’s review did not play a role in Mr. Niccolini’s departure.

Mr. von Bidder did not respond to multiple requests for comment about Mr. Niccolini’s removal, which The New York Post first reported on Monday afternoon.

Mr. Niccolini is the latest high-profile figure in the food world to fall from grace over accusations of sexual misconduct. Although he pleaded guilty to misdemeanor assault a year and a half before The Times published an article on the predatory behavior of Harvey Weinstein in October 2017, several famous restaurateurs have been accused in the months since as the #MeToo movement has grown. Mario Batali’s restaurant empire removed his name from the company; he lost licensing deals and a TV contract. Other prominent chefs, like John Besh in New Orleans, and Charlie Hallowell in Oakland, Calif., also stepped away from their restaurants after allegations emerged.

The Four Seasons Restaurant, which opened in 1959, had lost much of its luster by the early 1970s, when two new owners, Tom Margittai and Paul Kovi, began a rejuvenation and hired Mr. Niccolini. Under their direction, it became a lunchtime magnet for the powerful and famous of New York, including Jacqueline Onassis, Henry Kissinger, Martha Stewart, Nora Ephron, Liz Smith, Barry Diller and Bill Blass.

Mr. Niccolini became the public face of the restaurant, greeting diners and drawing up the all-important seating chart. His flirtatious demeanor at the restaurant landed him the nickname “Naughty Niccolini.”

Mr. Niccolini has been dogged by allegations of misconduct for decades.

In 1991, one of the restaurant’s waitresses sued Mr. Niccolini and the Four Seasons, citing sexual harassment. She claimed that for more than three years he had repeatedly rubbed up against her, told her in vulgar terms about his sexual urges and called her “slut,” “lesbian” and other things. Mr. Niccolini denied the charges. By 1994 Mr. von Bidder and Mr. Niccolini became the restaurant’s primary operating partners.

In 2014, a former assistant manager filed suit against Mr. Niccolini, Mr. von Bidder and the Four Seasons, alleging discrimination. The ex-manager said that after she returned from a maternity leave, the restaurant made it difficult for her to pump breast milk during work hours and, about three months later, fired her and replaced her with a man. In a response filed with the court, the defendants denied the allegations. Both lawsuits were settled.

Then, in June 2015, Mr. Niccolini was charged with felony sexual abuse after a 28-year-old woman told investigators that Mr. Niccolini had tried to kiss her in the bar of the Four Seasons, touching her legs and buttocks and pulling her toward him. He reached through an opening in the back of her dress, tugged on her bra until it ripped and tried to pull down her stockings, a criminal complaint said, adding that she had scratches and bruises from the encounter.

Nine months later, in March 2016, Mr. Niccolini pleaded guilty to misdemeanor assault in a deal with prosecutors to resolve the allegation. He was sentenced by a judge to “conditional discharge,” meaning he would not be required to serve jail time unless he broke the law over the course of 12 months.

Mr. Niccolini and Mr. von Bidder ran the restaurant in the Seagram Building until their lease expired in 2016 and the building’s new owners replaced them, prompting the Four Seasons’ move to 42 East 49th Street.