Is America’s Health Care System a Fixer-Upper or a Teardown? 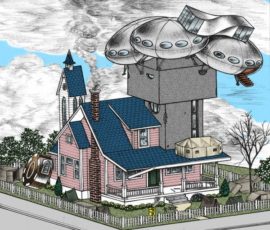 Maybe you pass through a wardrobe and there’s a surprise bedroom on the other side, if not Narnia. Some parts are really run down. In some places, the roof is leaking or there are some other minor structural flaws. It’s also too small for everyone to live in. But even if architecturally incoherent and a bit leaky, it still works. No one would rather be homeless than live in the house.

In Democratic politics, there is agreement that the old house isn’t good enough, but disagreement about just how possible — or affordable — fixing it will be. The biggest fault line in the debate is between candidates who think our current system can be salvaged with repairs and those who think it should be torn down and built anew. Building a dream house eases the way to simplification, but it increases potential disruption and cost.

The most limited Democratic plan, championed by House Speaker Nancy Pelosi, for example, would deal with the house’s biggest structural issues. It would lower the cost of health insurance for more people and fix some glitches in Obamacare’s design — the home construction equivalent of patching the roof, fixing a saggy porch and repainting. Residents could remain in the house while such minor repairs take place. These changes would not cost a ton of money. The house would still be weird. There would still be some people without a place to live.

The next tier of health care plans, like the one from Joe Biden, would go further. Mr. Biden, too, would patch the roof and upgrade the windows. But he’d also put on a big new wing: an expansion of the Medicare program that would allow more people to join, sometimes called a public option. Everyone living in the house can stay while the renovations take place, though there might be disruptions. It would cost more, more homeless people would now fit in, and some living in the weirder wings might move into the new addition. People would pay for housing through a mixture of taxes and rent.

There are a bunch of plans in this general category, including proposals from Michael Bennet, Steve Bullock, Pete Buttigieg, John Delaney, Julian Castro, Amy Klobuchar, Beto O’Rourke and Marianne Williamson. They differ, mainly, in how many people in existing wings are allowed to move into the new wing, and how large that wing will be.

Bernie Sanders wants to tear down the weird old house entirely and build his dream home. It would be enormous and feature many wonderful amenities. When done, there would be no homeless people at all, and everyone’s bedrooms would look exactly the same. The weirdness would be gone. But the entire old house would be gone, too, which some people might miss, and there could be unanticipated cost overruns in the construction. Some people might not enjoy the aesthetics of a modernist villa. While no one would have to pay rent in exchange for housing there, most people would have to pay more in taxes so the government could maintain the property.

Kamala Harris also wants to tear down the old weird house. But she doesn’t want to make everyone live in identical bedrooms. Her dream arrangement involves more choices, but most of the basic architectural features would be very similar. She would eliminate nearly every part of the existing health insurance system, and set up a new universal Medicare program that includes options from private insurers. It’s like a housing development with several slightly different model homes. The basic architecture and amenities would all be the same, but families would be able to choose some custom options, like paint color, countertops and bed linens. It would also be expensive, and everyone would still need to move.

At the debate last week, you heard arguments between the teardown candidates and the fixer-upper candidates about cost — and about change. Tearing down your current house comes with risks that many candidates don’t want to take on.

Although big changes to the health care system often garner strong support in surveys, Americans frequently also tell pollsters that they like their current insurance arrangements, and would dislike giving them up. The authors of some fixer-upper plans assume that only some people are looking for a change, while other candidates assume that, over time, nearly everyone will want to opt into a form of government-run insurance.

You also heard a debate about fairness and choice. Giving all Americans access to the same housing arrangements means that no one will have to live in a cramped attic. But it also means that some family members will have to part with some of their favorite furniture. “Of the 160 million people who like their health care now, they can keep it,” said Mr. Biden, of the virtues of his fixer-upper proposal. “If they don’t like it, they can leave.” By contrast, Ms. Warren emphasized the universal nature of a teardown approach: “We’re going to do this by saying, everyone is covered by Medicare for all; every health care provider is covered.”

The “Medicare for all” system envisioned by Mr. Sanders would cover more benefits than nearly any system in the world, but it would require everyone to have the same type of insurance, with no easy workarounds for patients who aren’t satisfied. Ms. Harris’s plan would allow more choice, allowing private plans to operate alongside the government system. But those tightly regulated products would not be allowed to differ nearly as much as plans that exist in today’s system, and would also amount to a brand-new system.

The candidates also disagree on how people should finance their ambitions. The fixer-upper candidates, for the most part, favor a system in which most Americans would still need to pay some form of rent to live in the house. The teardown candidates think everyone’s housing costs should be financed by taxes instead of direct payments.

A tax-financed system would mean big changes in who pays what for health care, and how. A system that preserves a mix of taxes, premiums and direct payments like deductibles would mean less rearranging of the financing of health care, and would probably require more modest tax increases.

FacebookshareGoogle+sharePinterestpin it
The New York Restaurant That Feels Like an Italian FarmhouseShould You Keep Taking Zantac for Your Heartburn?
Latest