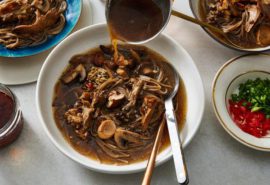 When I was a kid, I was obsessed with “Stone Soup.” If you’re unfamiliar, it’s a classic fable about a band of hungry travelers who build a pot of soup using only water and a haphazard mix of randomly donated ingredients from the nearby villagers.

The intended moral of the story is that sharing can create something that is greater than the sum of its parts, but my take-away was that you could make soup out of anything as long as you have a pot of water. At the risk of revealing just now nerdy I was and still am — how cool is that?

As a grown-up person who now understands how cooking works, I know that it’s not exactly revelatory that you can make soup starting only with water. That said, I rarely do, relying instead on homemade or store-bought chicken broth for a bulk of the flavor, and then building from there.

Recently, I found myself wanting a bowl of noodle soup to distract from the fact that the temperature outside still hadn’t cracked 50 degrees, but I didn’t have any chicken broth (or a chicken to make broth). Not willing to, you know, go to the store or anything, I decided I’d make do with what I had, which at the time was an unopened package of mushrooms, a few allium bulbs and the contents of my pantry. “Very ‘Stone Soup,’” I thought.

I’m not sure how good that stone soup ended up tasting, but I hope it was at least half as good as what I was able to throw together. The broth, made of only some mushrooms, a few cloves of garlic, a shallot and some fresh chile I found lurking in the back of my refrigerator, doctored with soy sauce and rice wine vinegar, was significantly better than it had any right to be. It was deeply meaty, but had no meat; it was savory and complex, but took less than an hour to cook. I found feeling myself deeply grateful for those mushrooms, which were the reason for the soup’s surprising excellence. 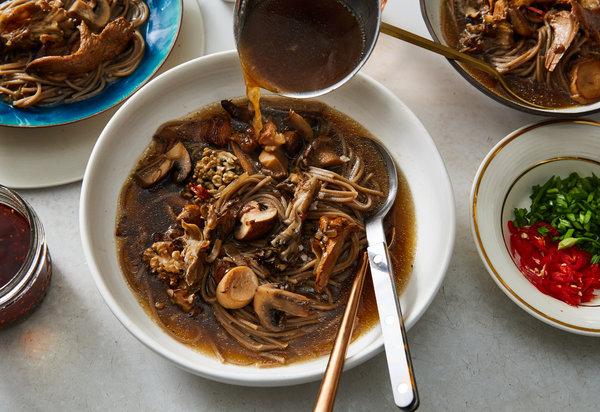 Of course, you can’t just throw a bunch of mushrooms into a pot of water and hope for the best — you’ve got to give them some love and attention. Cooking them long enough to brown is a key step: The water inside the mushrooms evaporates, and their magical, earthy flavor concentrates. The umami-rich bits that form on the bottom of your pot are what give the broth richness and depth, so be patient and let that happen. The type of mushroom you use is less important, although to maximize different textures and flavors, I like mixing fancier wild mushrooms with the more common cultivated varieties.

Then there are the sliced-and-toasted garlic and sweet rings of shallot that caramelize alongside the mushrooms, which also contribute to the deliciousness. But it’s the soy sauce and rice wine vinegar that make this light-bodied broth so highly drinkable.

Turns out, deciding I’d make do was one of the best decisions I’d made in the kitchen in a while. Salty and tangy, this soup is a glorious example of something being greater than the sum of its parts. Very “Stone Soup,” indeed.