In the Alps, Keeping Tabs on Melting Ice 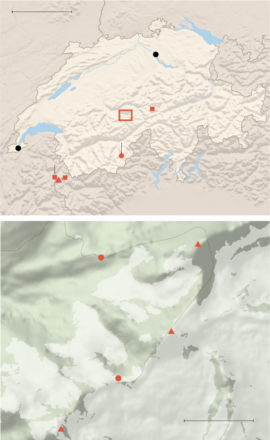 For over a century, the Jungfrau Railway has delivered tourists high into the wild and frozen terrain of Switzerland’s Bernese Alps. In 2018, more than one million people rode the train up to the Jungfraujoch, a railway station — the highest in Europe — that occupies a rocky perch between the Jungfrau and the Mönch, two of the country’s most famous peaks. The train goes through a tunnel for much of the journey, but just before plunging into darkness, it passes below a small hanging glacier. Four years ago, scientists discovered that the glacier was at risk of collapse.

Crumbling mountains and unsteady glaciers are familiar challenges in the Alps, a region with a long history of aggressive engineering against the elements. But climate change is altering the landscape and its hazards in ways that scientists are still trying to understand, even as new technologies are helping them to predict when disaster could strike. As average temperatures continue to climb, some glaciers that have long threatened communities will retreat, or even disappear completely. Others — like the Planpincieux Glacier on the Mont Blanc massif in the Alps, which recently made headlines when authorities closed roads and evacuated mountain huts because of the threat of collapsing ice — will present new dangers to the people below them. The challenge confronting scientists and authorities is to identify those areas where catastrophe is imminent, and then do their best to get people out of harm’s way.

The Jungfrau Railway is a case in point. In the fall of 2015, scientists noticed that cracks had begun to form near the bottom of the glacier that clings to the stony western flank of the Eiger, a 13,015-foot mountain through which the train passes on its way to the Jungfraujoch. The scientists’ measurements showed that up to 2.8 million cubic feet of ice — enough to fill the barrels of more than 10,000 concrete mixing trucks — appeared unstable. If that entire mass of ice were to come off in one fell swoop, the scientists’ modeling revealed, the resulting avalanche could strike the Eigergletscher station, a stop along the Jungfrau Railway where tourists often disembark to snap photos and admire the views. 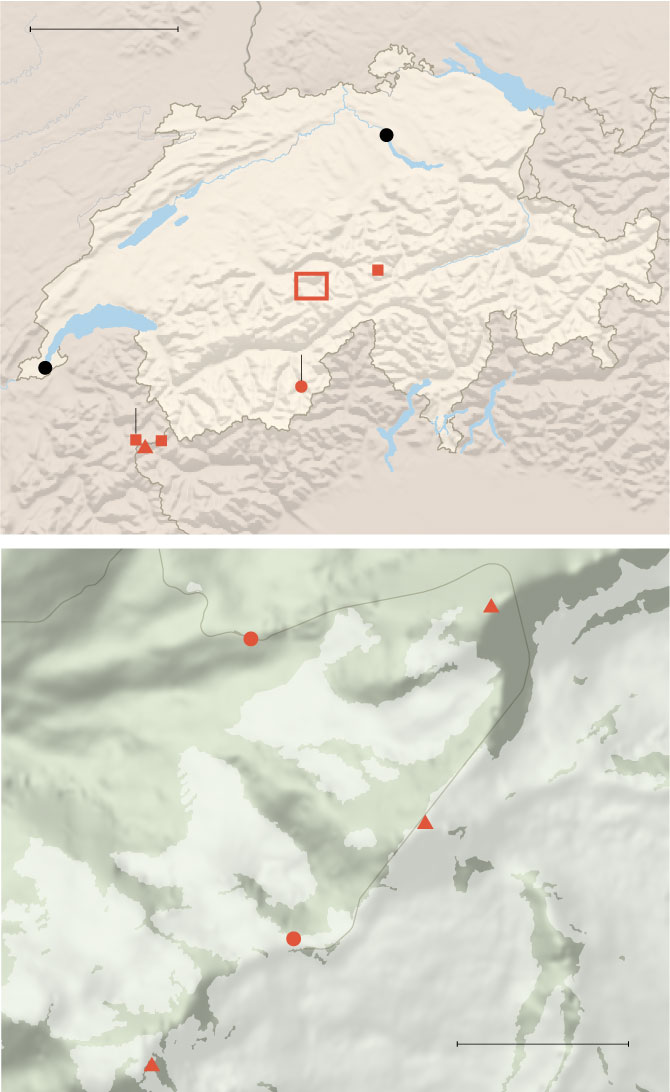 The company that manages the railway reacted quickly to this finding, installing a highly sensitive, ground-based radar system to continuously monitor the pace of movement within the glacier. A separate system was also installed, an avalanche radar that — when triggered by the movement of a large mass — automatically sets off an alarm and blocks the train from entering the danger zone. Once the alarm horn starts to sound, anyone in the area — including workers who are building the infrastructure for a new cable car at the Eigergletscher station — has between 35 seconds and 45 seconds to get out of the way.

Large collapses are usually preceded by faster movement within the glacier, which the first, more sensitive radar system is able to detect, said Richard Steinacher, a physicist at Geoprevent AG, the Zurich-based company that installed the radar system on the Jungfrau Railway. Every morning, he said, scientists check the latest data from the radar and assess the threat of a collapse.

“As soon as there is a higher risk of failure, they can close the train tracks and also the construction site,” Dr. Steinacher said, adding that this has happened a number of times, although so far only small avalanches have come down, nothing big enough to threaten the station. But still, those responsible for the area’s safety rely heavily on the radar monitoring: “For them, it’s super important to know what’s going on and to have numbers and reliable measurements,” Dr. Steinacher said.

This type of high-tech radar monitoring was installed at the Planpincieux Glacier, just two days after authorities announced the road and hut closures. Previous monitoring of the glacier had relied on satellite photos, the Associated Press reported, but that approach requires clear weather conditions and does not provide real-time data. Now the glacier’s movements are monitored continuously.

Such radar systems can provide authorities with the data they need to call for an evacuation, if the situation requires. In September 2017, some 220 people were evacuated from the village of Saas-Grund, a popular destination for hikers and skiers in the Swiss canton of Valais, after a radar system had registered a sharp uptick in movement within the nearby Trift Glacier. Early the following morning, the scientists’ forecast proved correct: Huge chunks of ice came tumbling off the glacier’s snout. But because the ice came off in several pieces instead of all at once, the debris didn’t travel as far as the village in the valley below. The collapsing ice didn’t cause any damage, and the villagers were allowed to return home later the same day.

In the Chamonix Valley, which lies on the French side of the Mont Blanc massif — just six miles as the crow flies from the Planpincieux Glacier — the Taconnaz Glacier has long shed large chunks of ice into the valley below. For now, the base of the glacier is still frozen to the bedrock below it, but scientists have warned that a succession of hot summers could thaw that base layer, potentially destabilizing a major part of the glacier.

This is an eventuality that the authorities in the Chamonix Valley — which attracts more than four million visitors every year — have taken very seriously. Instead of simply monitoring, they have taken a more hands-on approach: In 2013, construction was completed on a massive avalanche barrier at the base of the Taconnaz Glacier. The structure, which can contain up to 63 million cubic feet of material — more than 20 times the volume of unstable ice that threatens the Jungfrau railway — is the largest avalanche barrier in the world, according to Ludovic Ravanel, a geomorphologist with France’s National Center for Scientific Research. For now, Dr. Ravanel said, he is confident that people in the valley are well-protected from whatever might come tumbling down from above.

In the Alps, at least, experienced scientists have developed an intimate understanding of how glaciers behave, said Fabian Walter, a seismic glaciologist at ETH Zurich, one of Switzerland’s two Federal Institutes of Technology. But there is still a lot that scientists don’t understand about how, why or when a particular body of ice might collapse. And with climate change, the landscape is evolving in ways that are difficult to anticipate.

As an example of this, Dr. Walter pointed to Tibet, where in July 2016 the entire lower section of a relatively gently sloping glacier collapsed, triggering an avalanche that surged more than 3.7 square miles, killing nine herders and hundreds of sheep and yaks. NASA described the event as “one of the largest ice avalanches ever recorded.” Two months later, the same phenomenon occurred in the adjacent valley. Scientists were astounded, Dr. Walter recalled: “This was a completely new thing. Glaciologists had no idea how to deal with it.”

Subsequent research has begun to tease out the factors behind the enormous Tibetan avalanches, Dr. Walter said, but it’s important to remember how much we don’t understand, and how powerful natural forces can be.

“Every once in a while, there’s a tragic reminder of this,” Dr. Walter said. “But just because nothing happens for a while, that doesn’t mean that things are safe from now on.”

FacebookshareGoogle+sharePinterestpin it
Does Your Toothbrush Have an App Yet?Gear for Fall Foliage Hikes
Latest