In her words: The Long Fight for Pay Equality in Sports 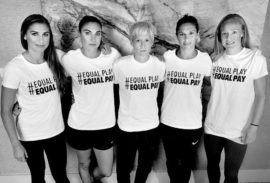 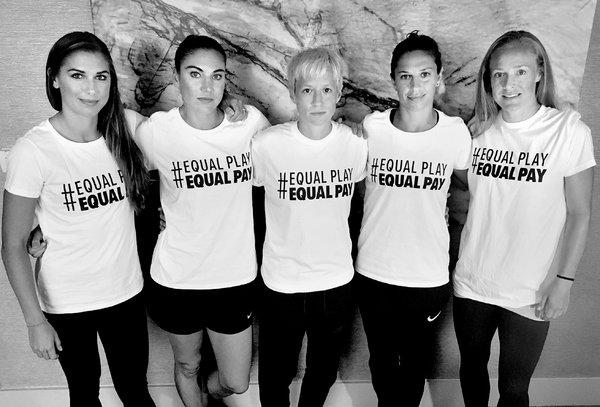 You’re reading In Her Words, where women rule the headlines. Sign up here to get it delivered to your inbox. Let me know what you think at dearmaya@nytimes.com.

“Everyone thinks women should be thrilled when we get crumbs, and I want women to have the cake, the icing and the cherry on top, too.”

— Billie Jean King, a tennis legend who led the charge for pay equality in her sport

Last week, all 28 players on the U.S. women’s national soccer team — the greatest women’s soccer team in the world — filed a gender discrimination lawsuit against the United States Soccer Federation, another move in its long-running battle for equality.

The athletes — including the stars Alex Morgan, Megan Rapinoe and Carli Lloyd — are not just taking issue with their paychecks but also with where they play, how they travel to matches, and the medical treatment and coaching they receive, in what they called “institutionalized gender discrimination,” as my colleague Andy Das reported.

“We’ve always, dating back to forever, been a team that stood up for itself and fought hard for what it felt it deserved and tried to leave the game in a better place,” Rapinoe told The New York Times on Friday.

The issue of pay inequality in sports is of course not just soccer’s problem. Women across all sports are paid less, and many have fought for equity in salary and in prize money.

Here are other cases where pay inequality has been stark, compelling female athletes to speak out.

Sign up here to get In Her Words delivered to your inbox!

31 Days of Women: Alison Hargreaves, who conquered Everest like no woman had before

When asked if a female climber needed to be tougher than a man, Alison Hargreaves, in her last known interview, said, “I think that women in general have to work harder in a man’s world to achieve recognition.”CreditAlamy

For Women’s History Month, we’re highlighting stories of trailblazing women you may not know, but should. We’ll bring you two women each week in this newsletter; head over to our Instagram for daily posts.

In 1995, Alison Hargreaves became the first woman to conquer Mount Everest alone, without bottled oxygen or the help of Sherpas. When she reached the peak, she sent a radio message to her son and daughter: “To Tom and Kate, my dear children, I am on the highest point of the world, and I love you dearly.”

Her homeland, Britain, rejoiced. But the excitement did not last long. Three months later, Hargreaves, 33, died descending from the summit of K2 in Pakistan. Read more about Alison Hargreaves here.

Sign up here to get future installments of In Her Words delivered to your inbox.

FacebookshareGoogle+sharePinterestpin it
On the Runway: Women Finally Get Their Own World Cup Soccer StyleOut There: Cut the Science Budget? Not So Fast
Latest