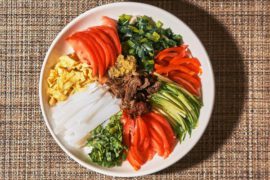 Sometimes a dish makes me forget that I’m supposed to be taking notes. I don’t want to analyze it; I just want to eat it, slowly, thinking giddy thoughts to myself. In no particular order, these are the dishes — more precisely, the eight dishes, a dessert and two drinks — that made me happiest this year.

Pork sisig — ears, jowl and snout broken down into a seething hash — gets all the glory, but when I go out with fellow Filipinos, this is the dish that’s scraped clean: rough-chopped squid, crackling in its own brine, with a throb of chile and vinegar like a gentle smack. 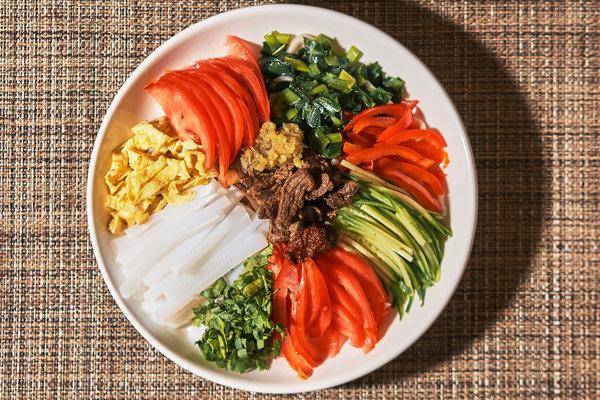 In this salad from Central Asia, cool, wobbly green-bean jelly lends a shiver to what is soon a maddened heap of hand-stretched noodles, creamy rags of omelet, raw vegetables and fried beef, finished with hot pickled garlic and a shriek of chile.

First, Berkshire pork belly languishes for eight hours in a pot of Taiwanese beer and rice wine steeped with dried orange peels, five-spice and shade upon shade of soy sauce. Then it’s turned to rubble and spooned over rice, with half a tea egg tucked in, its yolk a dying sun.

This Dominican chicken stew starts with sugar in a pan, stopped just short of burning, to give the meat a dark, caramelly crust. By the end, the broth is almost the thickness of ink.

In Tajikistan, bread is sacred and never attacked with a knife. So for this salad, the national dish, flaky fatir is torn by hand, then tossed in a milky dressing of kurut, staunchly salty sun-dried yogurt traditionally carried by nomadic shepherds as fuel to survive the steppes.

There is not enough okra on New York City menus, a deficiency addressed by this Ivorian stew lush with palm oil and crushed tomatoes. Here, okra’s viscosity isn’t disguised, but celebrated and taken to its logical conclusion: velvet.

This leviathan of a curry bun is served whole, then swiftly sliced open to reveal a steaming packet of Malaysian chicken curry, gilded with turmeric and ready to be soaked up by the fluffy, challah-like bread. Warning: It must be ordered at least six hours in advance.

Of all the nouvelle momos (dumplings) at this tiny, forward-thinking Nepalese restaurant, the most fervent are these deep-fried crescents littered with buffalo jerky that’s been salted and left to dry over the stove until purged of all but flavor.

In all my sips of the Mexican drink horchata, I’ve never encountered a version like this: more warmly spiced than sweet, and voluptuous, with ground walnuts in its depths and a crumble of pecans on top.

I might be willing to make a new life in Bensonhurst if only to have constant access to this mango shake, a meld of sweetened condensed milk and, as if that weren’t richness enough, yogurt made in-house with condensed milk. 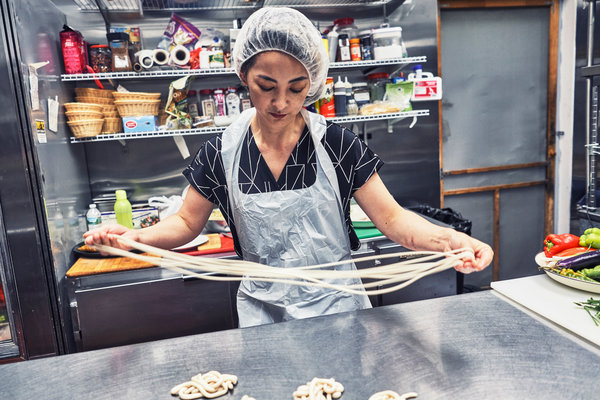 FacebookshareGoogle+sharePinterestpin it
Field Notes: A Guide to Working With a Makeup Artist for Your WeddingWhat to know about fibroadenomas of the breast
Latest