Sandwiches, with all their permutations, are an invitation to overzealous tinkering. They can be stacked up toward heaven in multiple layers or stuffed with an entire Thanksgiving dinner. They can overflow with soupy meats and be eaten with a fork and knife. And then there was that time KFC used fried chicken instead of bread to do the hard work of containing sliced cheese and bacon. The risk is that a particularly kooky sandwich values shock over logic.

At first glance, the Porkinator — served at Pilar Cuban Bakery in Bedford-Stuyvesant, Brooklyn — seems to be one of these sandwiches, designed as a dare. It is named like a character in professional wrestling, and contains five different types of pig product.

But instead of veering into carny-sideshow territory, it turns out to be far more clever and earnest. There are crunchy starbursts of chicharrón, housemade chorizo that tastes as if someone bottled a smokehouse, and whole ham croquetas, their insides gently funky and hot-dog pink. A smooth ham-pimento spread acts as both condiment and stabilizer, keeping the thing from turning into a mess on the wax-paper-lined plastic boats that Pilar serves almost everything in. It’s a wild sandwich that makes beautiful sense. 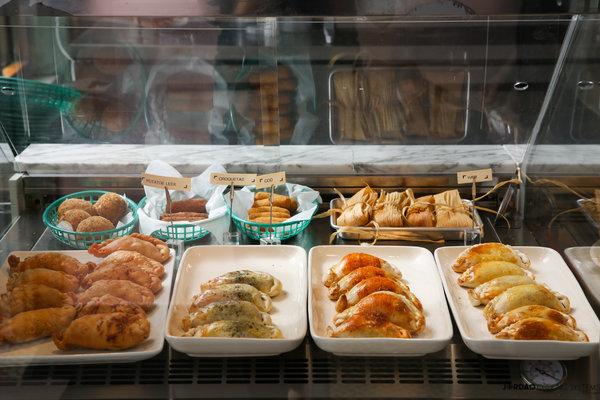 The pastry case’s savory section is a treasure trove of snacks, like picadillo-filled empanadas and freshly fried croquettes.CreditCaitlin Ochs for The New York Times

Pilar, which opened in January next door to its sibling, Pilar Cuban Eatery, straddles the line between bakery and cafe, less a place to grab a loaf than an opportunity to pick up a savory pastry to go. The owners, the chef Ricardo Barreras and his wife, Lisbeth Moreno, channel the Cuban bakeries of Miami, where you might pick up a few empanadas for a party, or a café con leche and a pastelito (pastry) for breakfast.

“For every Cuban in Miami, it’s part of their lifestyle,” Mr. Barreras said of his hometown. “In high school, for lunch, we’d either go to the Cuban bakeries or McDonald’s.”

Pilar is small, with just six tables and a constant soundtrack of Cuban music. The bakery was initially going to be a place for Mr. Barreras to make Cuban lard bread for Cubanos; in a sandwich press, that bread turns cracker-crunchy on the outside and cotton-fluffy on the inside, filled with smoked ham, roast pork, cheese and pickles. Add two ham croquetas and you get the croqueta preparada, a popular Miami sandwich that evolved from the croquetas that the city’s bakeries used to sell with a pack of saltines and some ketchup.

The bakery excels at little things stuffed and filled: Take the papa relleno, a glob of mashed potato injected with a spoonful of picadillo, sofrito-thickened ground beef that Mr. Barreras seasons with smoked paprika. A panko coat keeps the water-balloon-like shape from falling apart in your hand. That same picadillo filling comes folded into a baked empanada, hiding whole plump green olives and raisins like babies in king cakes. These little accents are vestiges of the North African influence on Spanish cuisine; as Cuba was one of the last Spanish colonies in the Americas, Mr. Barreras said, it maintains a strong link to that nation’s food.

The guava crumb bar is impressively heavy, sticky and tangy from a thick layer of guava paste, and gilded with Barbie-pink icing.CreditCaitlin Ochs for The New York Times

Pilar’s chorizo is a nod to Spain as well; Mr. Barreras’s great-grandparents were Galician. Here, the sausage shows up in breakfast-y, egg-filled fried empanadas so generously stuffed they press back against your teeth at first bite. The frying makes the empanada dough almost like pastry, its braided edges all tender flake.

Guava paste is a star of the pastry case’s sweet sector, most notably in the guava cheese pie, where it is spread atop a slab of thick, cool cream cheese. (Mr. Barreras explained the pairing as the peanut butter and jelly of Cuban food.) And it adds a bit of sticky chew to the crumb bar, as heavy as a small dumbbell and painted with Barbie-pink icing; have that for breakfast alongside a café con leche especial, made with Café Bustelo and sweetened condensed milk that skews the drink pleasantly syrupy.

Bustelo, a beloved brand for Cubans and New Yorkers alike, is a given at any Cuban bakery. But this bakery lives on the edge of Bedford-Stuyvesant and Clinton Hill, off a stretch of Bedford Avenue now home to one of those reclaimed-wood coffee shops that sells dandelion-root lattes and expensive house plants. So Mr. Barreras also offers Kitten Coffee, a local, lighter roast, as a concession to customers who won’t give up their cortado for a cortadito.

Pilar Bakery has slid easily into the neighborhood without much pandering to the dandelion-latte set. The batidos, thick with whole and sweetened condensed milk and sunny with tropical fruit, almost taste as if they’re made with yogurt. The walls appear millennial pink at first glance, but they’re actually more of a Miami conch.