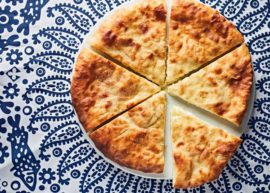 Just before dinner is over at Pirosmani in Sheepshead Bay, Brooklyn, the waiter will clear everyone’s plates, and first-timers may worry that the kitchen has forgotten about that order of Georgian dumplings. But fresh, spotless plates are a requirement for enjoying the baseball-size khinkali; they serve as a test of one’s dumpling-eating skills.

“You have to eat it without getting any drips on the dish,” said the owner, Manuchar Katchakhidze. Pick it up with your hands, then take a bite from the corner, watch the steam escape, and drink the broth waiting behind the dumpling’s thick, memory-foam-squishy skin.

If you’ve done it properly, your plate will stay clean even after you’ve gotten through the filling, a deeply savory mix of beef, pork shoulder, garlic, onion, Georgian red pepper and fresh cilantro. The balance of that simple filling is of the utmost importance; Mr. Katchakhidze has a rule that in the kitchen, “at least three or four people have to taste the khinkali. Your whole business depends on khinkali.” 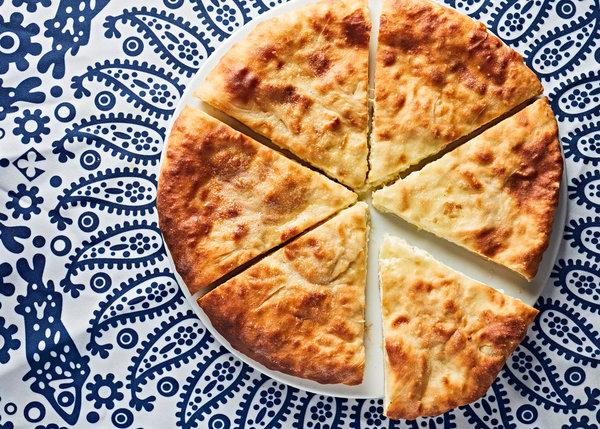 Imeretian kachapuri is something between a calzone and a double-crusted pie. Its airy dough is made with kefir.CreditJenny Huang for The New York Times

Pirosmani, which opened in 2001, was bought in 2017 by Mr. Katchakhidze, a journalist and the editor in chief of Mamuli, the only Georgian magazine published in the United States. One of his main motivations was preserving the murals on the walls — replicas of paintings by Niko Pirosmani, a famous Georgian naïve artist who depicted everyday scenes.

“I didn’t want to give up this Georgian art in New York,” said Mr. Katchakhidze, who repaired the murals and built frames around them as part of a recently completed renovation. “Now, if anybody wants to see Georgian feasts, or picnics in the forest in the 17th century, they don’t have to go to the galleries or museums — they just go to the restaurant.”

That renovation included some updates to the menu: In addition to seeking out spices from Georgia, Mr. Katchakhidze and his team pulled new recipes from some of that nation’s oldest cookbooks, published in the early 1800s. They carefully studied the recipe for chanakhi, a traditional lamb and eggplant stew, to ensure they were using the right kind of onions (red, medium-sweet). Their chanakhi is cooked in a traditional clay pot, topped with a sheet of dough that retains the stew’s moisture and flavor, and puffs up above the dish in a dramatic dome.

Those with a nominal interest in either Georgian food or molten cheese already know the Adjaruli khachapuri, a boat-shaped pastry filled with salty cheese and topped with a raw egg that’s swirled tableside to create a molten center. Pirosmani happily serves it, but “when you have that, you are full and you cannot have anything else,” Mr. Katchakhidze said. So he also offers Imeretian kachapuri, which lands somewhere between a calzone and a double-crusted pie, and plays nicely with other dishes. The dough, made with kefir, is airy and tender. The simplest version, packed with three types of cheese, is perhaps the easiest legal way to achieve a dopamine surge.

To front-load a feast of cheese pies and meat stews with a few vegetables, you’ll want to try the badrijanis pkhali, thin and smoky eggplant strips wrapped around an almost ricottalike filling of blitzed walnuts, garlic, chicken broth and fenugreek.

The quietly stunning “Georgian salad” looks like what you might find at a lazy neighborhood potluck: a wide platter of sliced cucumber, strips of red onion and unspecial tomatoes slicked with dressing and punctuated with green bits of scallion and herbs. Somehow, it sings just as loudly as that kachapuri, bright and sharp thanks to red wine vinegar and imported Georgian sunflower oil.

One specialty that shouldn’t be missed is the Gouda cheese, made from goat milk in the Georgian mountains. It’s dense and honeycomb-patterned, and tastes like what you’d get if Willy Wonka condensed and fermented a wheel of pecorino into something far funkier and saltier than the Italians could ever imagine.

On weekends, the restaurant is enlivened by Georgian families out celebrating, their children dancing in the aisle to Georgian lounge music sung by a man sitting at a blindingly white piano. It’s quieter on weeknights, when he hopes to attract a wider audience; he is hoping to get a liquor license and sidewalk seating. The new menu will change four times a year, according to the seasons and the connections that Mr. Katchakhidze is building with upstate farmers.

He is particularly excited about the new forks and knives, so long as they look like miniature fireplace tools. “It’s good for Georgian food,” he said. “When you hold it in your hand, you look like you are the king or queen.”

They have become a source of pride for an unexpected reason, he said: “You don’t find these kinds of utensils anywhere in New York — that’s why people are stealing them.”