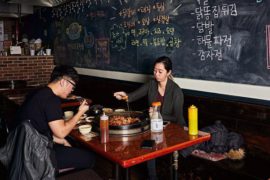 The great black moon of the grill pan is silent, for now. One sits at the center of every table at Doraon 1.5 Dak Galbi, a small Korean restaurant a few blocks from the Broadway Long Island Rail Road stop in Flushing, Queens.

Each pan is deep enough that none of the coming bounty will spill out: raw chicken thighs stained red from gochugaru (sundried chiles, ground coarsely so they still have texture); cabbage, what looks like several heads’ worth, the leaves still curled and barely chopped; kkaennip (perilla) with its faint hint of licorice; fat thumbs of chewy tteok (rice cakes); and sweet potatoes, whose journey toward tenderness is a measure of the readiness of the meat.

All are dropped into the pan at once, going off like a chain of firecrackers, before settling down to a steady hiss. A hot-sweet sauce dominated by gochujang, a rusted-crimson paste of chiles, mejugaru (fermented soybean powder) and glutinous rice flour, is squeezed from a bottle, a volcano from above.

In South Korea, dak galbi (spicy chicken stir-fry) restaurants have been known to hand out aprons before a meal, to protect their customers’ clothing. Here, the servers — often Doraon’s owners, Hoy-Soon Choi and Kyung-Soon Han — are prudent in their flipping of ingredients, wielding two steel spatulas in darting strokes that keep everything in line. 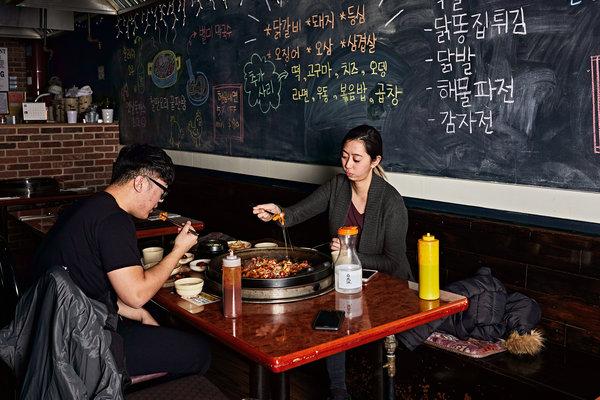 At Doraon 1.5 Dak Galbi, the specialty, a spicy chicken stir-fry from Chuncheon, South Korea, is cooked at your table.CreditJenny Huang for The New York Times

There is no way to hurry the process. Don’t poke or pry with your chopsticks, and don’t try to sneak a tube of tteok off the pan — you must wait. Eventually the flesh loses its gloss, the sweet potatoes grow pliant and the cabbage leaves shrink into themselves, while still retaining a backbone of crunch.

You eat and eat, and then, near the end, rice comes, along with more perilla and roasted seaweed, stirred and pressed against the grill until the grains crackle. You scrape to get the crispy bits.

Galbi translates literally as ribs and is commonly used as shorthand for so galbi, grilled beef short ribs. But it’s also a catchall for a genre of Korean barbecue, which explains why, in dak galbi, the ribs are pure metaphor. (The preference is for the dark, fuller-flavored meat of chicken thigh, not breast.)

The marinade is distinct, too, with gochugaru at the fore and soy sauce relegated to a supporting role. There’s no fixed recipe: One might shriek fire, and another blithely hum. The version at Doraon is between extremes, forceful without burn, its ardor drawn less from chiles than from gochujang’s conflagration of salt, sweetness and funk.

The dish’s roots go back to Chuncheon, a town northeast of Seoul and just south of the 38th parallel. It was nearly leveled when northern troops invaded in June 1950. (A map of Chuncheon, flanked by the green shoulders of mountains, is painted the length of one of Doraon’s walls.) After the war, coveted marbled cuts of beef and pork were expensive, and struggling cooks turned to chicken.

Yet this dish, born of poverty, has its own luxury: the sheer abundance heaped on the grill. At Doraon, the minimum order of dak galbi is two servings, but that’s enough for four. More ingredients may be added, including ramen or udon, to catch more sauce, and mozzarella — a craze in South Korea, where some restaurants have created a separate trough in the pan just for melting the cheese into a kind of fondue, for dipping.

Into the grill pan go chicken thighs, cabbage, kkaennip (perilla), sweet potatoes, tteok (rice cakes) and, if you like, mozzarella.CreditJenny Huang for The New York Times

Only a few banchan (side dishes) accompany the meal at Doraon, including skinny strips of fish cake under a sheen of sesame oil; radishes and jalapeños, barely muted by pickling; cucumber kimchi with an adamant heat; and a forgettable Western-style salad. Best is gyeran jjim, two eggs beaten and boiled, here seasoned with little more than salt, and presented frothing in a stone bowl. It’s close to custard but lighter, a spun skein of egg.

Pajeon (scallion pancake), loaded with pork belly and kimchi, must be ordered separately. It’s a grand round, cut into jagged angles, with a near-orange crust, lacy and charred in the right places, and scallions like tendrils peeking through.

No dessert ends the meal. Instead, there’s a tiny bottle with a swig of Maeil Biofeel, a yogurt drink that evokes liquefied White Rabbit candy.

Ms. Choi and Ms. Han, both natives of South Korea, met while working as waitresses farther down Northern Boulevard. In 2015, they took over a restaurant that was then called just 1.5 Dak Galbi, changed the recipe and added Doraon — “come back” — to the name, a plea to the neighborhood to give the place another chance.

FacebookshareGoogle+sharePinterestpin it
Yoga for Incontinence? Evidence Is LackingHungry City: Where the Grill Pan Awaits
Latest