How to Take a Portrait of America 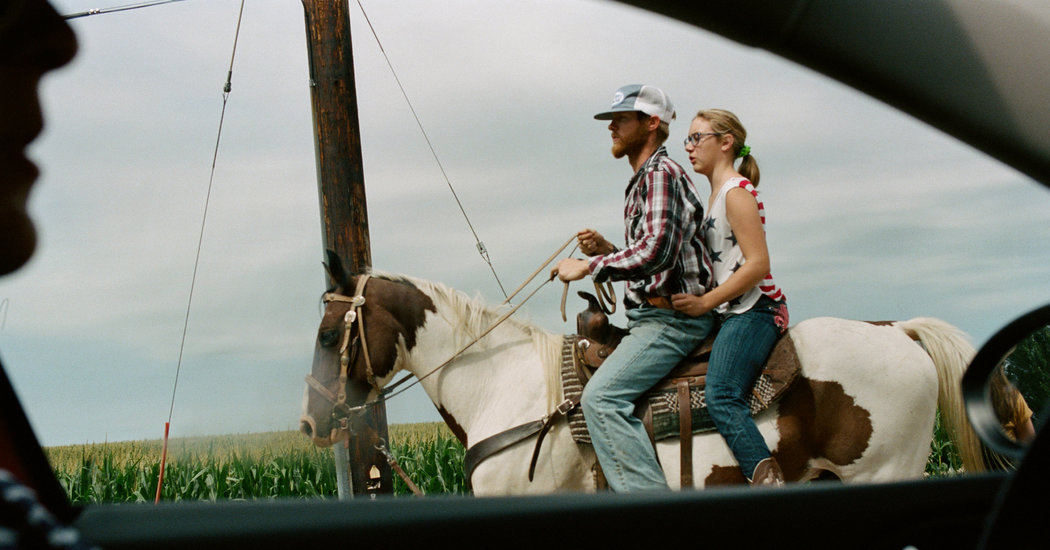 Times Insider explains who we are and what we do, and delivers behind-the-scenes insights into how our journalism comes together.

Last December, Tanner Curtis, a Politics photo editor at The Times covering the 2020 U.S. presidential election, needed a break from the candidates. He mentioned to Eve Lyons, a photo editor for Styles, that he’d love to collaborate on a project for The Look, a visual Styles column that examines identity and culture.

They got to talking, and they landed on a project that would take place on a road trip across America — touching on politics, but in a less direct, more atmospheric way. They brought in another Styles editor, Bonnie Wertheim, to hone the idea and saw their seedling pitch grow limbs, from one road trip to four, each produced by its own photographer and reporter. The pairs would explore separate themes — patriotism, tradition, community and youth — and their routes would lead them through states with political clout in the next election.

The editors wanted storytellers on the road who were familiar with their regions. The photographer Daniel Arnold’s Milwaukee upbringing, he said, meant that while documenting patriotism in the Midwest with the writer Jacqui Shine, he “wasn’t going to be some weird interloper making a snap judgment about what goes on.” They began at a flag manufacturer in Oak Creek, Wis., and ended at a gun club in Columbia, Mo.

Mr. Curtis said it felt significant to have the photographer Andre Wagner and the writer Hanif Abdurraqib capture different aspects of community from Baltimore to Hilton Head Island, S.C.; they’ve both covered black identity in America before. And the Los Angeles-based journalists Jessica Lehrman and Walter Thompson-Hernández were natural fits to document youth culture throughout the Southwest, from a Junior R.O.T.C. camp in San Diego to pageant competitors in El Paso.

“I knew our country was diverse, but I didn’t know just how diverse it was,” Ms. Lyons said. Mr. Curtis was surprised by some of the narratives and characters too, citing in particular Ms. Shine and Mr. Arnold’s story about Matt Russell, a fifth-generation farmer in rural Iowa who, with his husband, has become a provider of refuge for teenagers with troubled pasts.

Pursuing the topic of tradition, Farah Al Qasimi and Liana Aghajanian snaked along the Northeast. They stopped in 20 cities in two weeks, beginning in Hamtramck, Mich., known for its dense immigrant population. Ms. Al Qasimi said she learned a lot on the road: For example, a person’s body can, in fact, begin to reject mozzarella sticks and diner pies after a period of time. Rupert Holmes’s anthem “Escape” (you’ve heard it: “If you like piña coladas …”) might be the most played song on the radio, along with “working-people hymns of the ’80s.” And, more seriously, “People generally feel very unheard,” she said. “At times, I felt like we were their unpaid therapists. There was a lot of emotional labor involved.”

Not everybody was so open. They were in Ohio during the Dayton shooting, and as a pair of Middle Eastern women, they said they raised some eyebrows in the rust belt. Once at a gas station in Strausstown, Pa., Ms. Al Qasimi read a sign: “United States Terrorist Hunting Permit.” There, she received what she described as “the absolute worst, ugliest look, just the worst stare-down.”

“We had none of that friction,” said Mr. Arnold, who recalled speaking with Ms. Al Qasimi about these episodes on the road. “Jacqui and I are Midwestern white people. We could be invisible.”

While Ms. Lyons said they had to cull images significantly, the impact of the stories remains striking. Tracy Ma, a visual editor for the Styles desk, worked on the design online, and reined in her often maximalist style in service of the project: “I wanted to have a minimal footprint,” she said. Tala Safie created a cohesive design for the print version, in papers on Sunday.

The project represents “a tiny slice of America,” Ms. Lyons said, but she hopes it gives people a better idea of what America looks like as it enters 2020. “We’re choosing a president for everybody, so it’s good to know what people are thinking and feeling. ”

On their last stop in the Northeast, Ms. Al Qasimi said, they ventured into a forest in Canterbury, N.H., for a church service — her first. She was tired. It would be a mostly older, white congregation, and her expectations for mutual understanding were low. But “in the middle of the prayer,” she said, “I started crying.” Everyone was remarkably caring and compassionate. Suddenly, it was her turn to confront her bias. “We’re all really worried. It’s rightfully a time of heightened anxiety,” she said. “I hope people will realize that they have more in common than they think.”

Follow the @ReaderCenter on Twitter for more coverage highlighting your perspectives and experiences and for insight into how we work.

FacebookshareGoogle+sharePinterestpin it
Tiffany’s Vision & Virtuosity Exhibition Offers a Glittering Escape From RealityThose People We Tried to Cancel? They’re All Hanging Out Together
Latest