How to Make Meals From Office Snacks 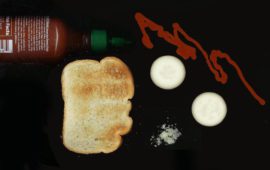 Some of the most compelling meals are born of strange constraints. The rationing of World War I gave us the eggless, butterless, milkless cake. Later, during the Great Depression, housewives poured sugary syrup over Ritz crackers to create the filling for a back-of-the-box recipe called Mock Apple Pie.

Today’s MacGyverish food and drink derives not from scarcity but rather abundance. Oat milk lattes, cauliflower-crust pizza, Soylent and veggie burgers that “bleed” all suggest a surplus of options and a new anxiety over what our choices mean.

At work, the ample free snacks of the modern office kitchens now serve as the basis for a scrappy new cuisine. White-collar workers attempt to make square meals from free Chobani yogurt cups. Kind bars are treated as a kind of bumper crop, and the most sought-after luxury is bread, prized for its role as a base for different toppings.

[Do you like being crafty? Sign up for our Smarter Living newsletter, which delivers more tricks, hacks, and advice on better ways to be alive.]

“I literally never go out and buy lunch,” said Rebecca Jennings, a culture reporter at Vox Media. We first met sharing a desk pod last year, during my own temporary employment with the company.

Ms. Jennings is known around the office for her kitchenette cooking. Her signature dish? The personal “work pizza,” which makes use of complimentary bread, sriracha and Babybel. Jennings bakes these ingredients in the toaster oven for about four and a half minutes, until the cheese begins to brown. After that, she adds a special touch.

“We have this drawer that I don’t think a lot of the people at the office know about, with leftover Parmesan cheese packets from when big teams order pizza,” she said. “I’ll sprinkle that on top.”

Kira Fisher, who has worked for several social media companies, including Tumblr, makes use of her own free office cheese, sometimes with a Mediterranean twist.

“One thing I really like to do is make a cheese plate,” she said. “Getting all the fruit we have in the office and cutting it — cutting the apples, having grapes, finding whatever cheese they have — and making a little spread, a little office mezze platter.”

From 2012 to 2015, Ms. Fisher ran the food blog Sad Desk Lunch, where she cataloged user-submitted photos of bleak workday meals. Elsewhere online, lists of so-called “D.I.Y. office snacks” and “office snack hacks” recommend unofficial uses of office kitchen appliances, such as using a Keurig coffee maker to cook ramen. (Representatives from Keurig declined to comment on this use of their product.)

The phenomenon is hardly confined to workplaces in the United States. Ms. Yeah, a Chinese YouTuber whose offline name is Zhou Xiaohui, has gained over five million followers for her elaborate workplace lunches, prepared using supplies from her Chengdu office building. In one video, she cooks hot pot in the water cooler. In another, she makes crepes on the hot side of a modified computer modem.

According to Ms. Fisher, the great challenge of office cooking is overcoming the sweetness of snack food. She sometimes makes yogurt more feel more lunch-like by adding a handful of crushed-up potato chips, or a salty “new wave snack” like Biena roasted chickpeas.

“Most tech companies usually set you up for either breakfast — with the yogurts, the oatmeals, the cereals — or they set you up for the midday snack,” Ms. Fisher said. “They aren’t going to give you the lunch.”

The history of free snacks at work depends on the history of snacking in general. Mass-produced packaged snacks first reached ubiquity in the mid-20th century, with products like Cheetos, Fritos and Twinkies. Between 1977 and 2002, the number of Americans eating three or more snacks per day increased from 11 to 42 percent. During this period, employees often purchased snacks at work, first from wheeled snack carts, and later from automated vending machines.

Around the time of the dot-com boom, the expense of work snacks was first transferred to employers, at least in some white-collar industries. Free snacks at work are strongly associated with the profligacy of Silicon Valley, but the precise origins of the perk are unknown.

There are limits to what kinds of foods employers are allowed to provide for their employees if they want those purchases to be tax-deductible. According to Section 119 of the Internal Revenue Code, a business can deduct occasional employee meals, but only when those meals are “furnished for the convenience of the employer.” Meals furnished for the convenience of the employee, on the other hand, are seldom allowed as a business expense.

Free snacks belong to a third category of cheap and infrequent perks called de minimis fringe benefits. The I.R.S. doesn’t tax these because, well, it’s tedious to determine their value. Up until last year, an employer could actually deduct the full cost of employee snacks, which might help to explain how they became a workplace fixture. In 2018, this tax break was halved, following the Tax Cuts and Jobs Act of 2017. It is too early to predict how the new set of rules might affect the future of the start-up smorgasbord. For now, employees of Yelp continue to enjoy a wide range of sweet and savory options.

“We’ve got roast beef, turkey, ham and different types of bread,” said Michael Sztanski, a sales manager. “We have bagels. We have a lot of frozen food, like burritos.” Also: iced tea, coffee, chips, hummus and hard-boiled eggs.

At lunchtime, Mr. Sztanski and his colleagues often joke that they feel like they’re playing a game of “office ‘Chopped’” — a reference to the popular TV franchise in which contestants cook meals with limited ingredients. His most prizewinning lunch is “a make-your-own-bowl-type thing,” in the style of fast-casual restaurants like Dig Inn and Sweetgreen.

“I’ll take the hard-boiled eggs and chop them up to make egg salad with mayo, pepper and salt. That’ll be one part of the bowl. Then I’ll crush up Doritos, or any chip — most recently, I’ve been using Sun Chips. I’ll crush them up as another part of the bowl. Then I get mozzarella balls, which I’ll throw in there as well. And a jerky stick.” (Speaking of ingenuity and necessity: Doritos is often also a key component of prison cooking.)

When it comes to the line between snack and meal, there is no definitive legal definition. The National School Lunch Program defines a high school lunch as 750 to 850 calories of food, encompassing one cup of fruit, one cup of vegetables, one cup of milk, two ounces of grain, two ounces of meat and no more than 284 milligrams of sodium. The 95-page I.R.S. Fringe Benefit Guide lists examples of snacks as “coffee, doughnuts, or soft drinks,” but does not rule on category busters like bread, yogurt, turkey, burritos or crushed-up Doritos with mozzarella balls. Ultimately, the distinction might depend on the value and satiation to employees. 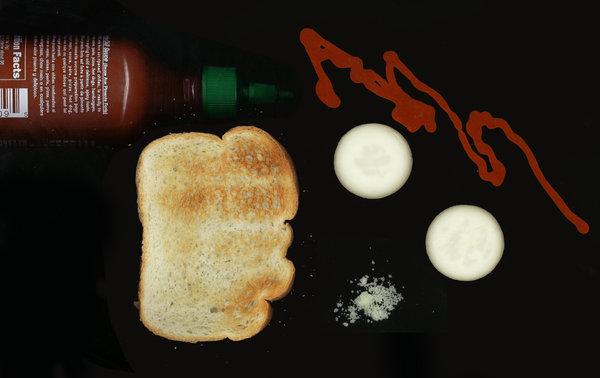 “If people are eating their snacks as meals, it almost counts as a portion of their salary,” said Stewart J. Schwab, a professor of employment law at Cornell University. “The I.R.S. isn’t getting down to this nitty-gritty level, generally speaking.”

Employees do get fired for abusing workplace food privileges, but most cases involve food service workers eating sellable product. When it comes to office chefs exploiting their free snacks, the legal limit really depends on the terms set forth in the employment contract. In at-will employment states, a worker can be fired anytime, without just cause, no matter how many snacks they eat for lunch.

“If the employer wakes up one day and just doesn’t like you, or doesn’t like how many snacks you’re taking, you can get fired,” Dr. Schwab said. “The other case is that maybe the employer is going to start saying that this is a crime, like embezzlement or theft. But for 20 Fig Newtons versus five, it’s a little hard to believe they would do that.”

While such differences may be negligible to employers, for workers in expensive cities like New York and San Francisco, the money saved turning snacks into lunch could mean making next month’s rent. This is especially true for entry-level workers, who often earn at or below the cost of living. Ms. Jennings estimates that free snacks at Vox Media save her about $200 every month, but those savings initially came at the cost of embarrassment.

“It made me feel like I was a cheap person who was bleeding the company dry with my toast consumption habits,” she said.

She probably should not be concerned. “Vox Media’s office cafes make for great spots to gather, have serendipitous run-ins and host creative brainstorms,” a spokeswoman for the company wrote in an email. “It’s no surprise our employees have grown as clever with the snacks as we are with our work.”

Which raises the question: What are the ethics of snacks? According to Brookes Brown, an assistant professor of philosophy at Clemson University, the compensation level of employees is one factor. “Are they an unpaid intern or an underpaid employee suffering from broader social injustices?” she said. “Or are they the C.E.O. who wants to make a higher rung on the Forbes wealthiest people list?”

Ethically speaking, one also should consider the overall supply of free snacks, and the impact of personal snacking on the group.

“It definitely matters whether the snacks show up in an endless supply or whether there’s a limited amount put out each day,” said Karen Stohr, an associate professor of philosophy at Georgetown University. “The 17th-century British philosopher John Locke put this in terms of an obligation to leave ‘enough, and as good’ for other people,” she said. “That seems to apply to employer-provided snacks.”

Ms. Jennings said that at Vox Media, snacks are restocked daily. Four years into her tenure with the company, she now enjoys her work pizza without shame.

“There’s always plenty left over, so I don’t feel bad at all,” she said. “But if you are the type to go in really early in the morning and take all of the most desired thing, like the cups of guacamole or the hard-boiled eggs, that’s extremely un-chill.”

FacebookshareGoogle+sharePinterestpin it
Hospital and Time of Delivery May Affect Mother’s HealthGlobal Health: Diagnoses by Horn, Payment in Goats: An African Healer at Work
Latest