How Music Can Rev Up a High-Intensity Workout 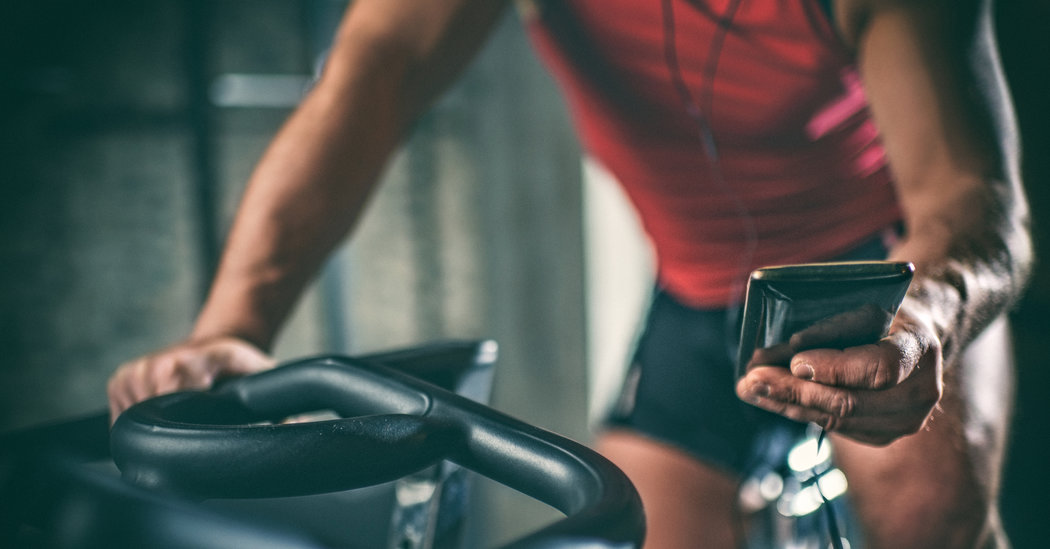 Cuing up some Calvin Harris or Macklemore during short, intense workouts might change how we feel about the exercise, according to a useful new study of how listening to jaunty music can encourage us to push ourselves harder. The study also found, though, that other types of distractions, such as podcasts, may not have the same effect.

High-intensity interval workouts are quite popular at the moment, touted by trainers, coaches, scientists and this column as a way to exercise effectively without investing much time. Consisting of brief bursts of taxing effort interspersed with rest, high-intensity interval training, or H.I.I.T., can often improve people’s health and fitness to about the same extent as sustained jogging or similar training, studies show, but in a fraction of the time.

These workouts are intense, however, by definition, and some people find them intimidating or physically unpleasant. A few past studies suggest that people who are new to exercise are especially prone to dislike or avoid high-intensity training.

Understanding this hesitancy, some H.I.I.T. researchers have begun to wonder how intense workouts might be made more tolerable and appealing. Music is one obvious possibility. A wealth of past science suggests that listening to music changes how we experience exercise of all types, nudging us to feel less bored or tired and more motivated.

These studies have not focused on novice and perhaps reluctant exercisers trying their first H.I.I.T. sessions, though. So, for the new study, which was published last month in Psychology of Sport & Exercise, researchers from the University of British Columbia at Okanagan decided to focus on precisely that group.

They first recruited 24 adult men and women who rarely exercised, invited them to a university exercise lab, fitted them with heart rate monitors, and introduced them to the one-minute workout. This approach to H.I.I.T. is among the briefest, involving three, 20-second spurts of all-out exertion — on stationary bicycles, in this experiment — with two minutes of recovery between each interval.

The volunteers were told the study would track their emotional and physiological responses to H.I.I.T. They were told nothing about music. But before one of their workouts, a researcher casually asked if the volunteers would mind if he turned on the lab’s speakers. They could choose pop music, rock or hip-hop, the researcher told the volunteers; their pick.

The cyclists decided, the music began and so did the H.I.I.T. session. The up-tempo songs, including “Let’s Go,” by Calvin Harris, and “Can’t Hold Us,” by Macklemore, had been winnowed earlier by other listeners from a set of popular tunes based on which songs the listeners thought were likeliest to get people through workouts.

After the session, the volunteers rated how hard the exercise had felt and how much — or little — they had enjoyed it.

The volunteers repeated these workouts two additional times, once without music and once while a podcast about the scintillating topic of consumerism played in the background. The researchers aired the podcast to test whether aural distractions besides music affected workouts. During and after each session, the scientists tracked heart rates, power outputs and people’s feelings about the exercise, and then they compared numbers.

As a group, the volunteers almost all reported feeling relieved and happy after all three workouts, primarily because they were done. This response is likely to be familiar to anyone who does intervals. It’s a pleasure to be finished.

But the volunteers also reported having enjoyed the exercise most when the music was playing, compared to when they heard the podcast or nothing. Surprisingly, they also turned out to have exerted themselves most then. Their heart rates and power outputs were significantly higher during the session with songs than without, even though their subjective rating of the difficulty of the exercise remained constant. In other words, they pedaled harder when music played, but did not feel as if they were doing so.

These findings suggest that up-tempo music may change not just our psychological but also our physical responses to H.I.I.T., says Matthew Stork, a postdoctoral researcher at UBC Okanagan who led the new study.

That the podcast did not affect exercisers in the same way is also interesting, he says, because it indicates that the music did not so much distract exercisers as engulf them.

“There’s this idea called entrainment,” he says, meaning that our bodies tend to sync with rhythms from the world around us, especially the rhythms of music.

Entraining to the songs, the volunteers would have upped their pedaling to pair it with the musical tempo, he says. They felt no such compulsion when hearing about consumerism.

Of course, this was a small, brief study. It does not show if music can keep people exercising intensely over the long term or if all types of music elicit the same response. “Let’s Go,” for instance, would not be on my playlist. (I currently love “She’s Kerosene” by the Interrupters and “High Hopes” by Panic at the Disco during intervals. Add your favorites in the comments section.)

“The point is that high-intensity intervals can be a good option for people who do not think they have a lot of time for exercise,” Dr. Stork says, and entraining to Macklemore or your preferred musicians might just make these workouts more palatable.

FacebookshareGoogle+sharePinterestpin it
So You Want to Overturn Obamacare. Here Are Some Things That Would Be Headaches.The Fish Is Boneless. (Fishless, Too.)
Latest