How Insects Cope When Blood Rushes to Their Heads 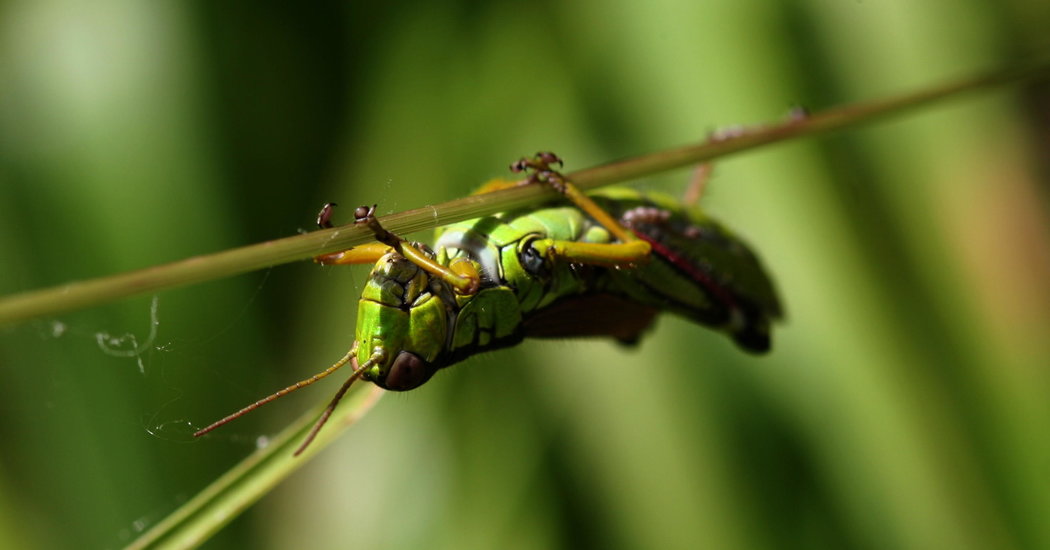 You wouldn’t think gravity would be a big worry for insects. They’re so small. So light. An ant that fell from a second-floor balcony and landed on its head wouldn’t even get a bruise.

Consequently, scientists have not concerned themselves greatly with what gravity does to insects. But a group of scientists who routinely put grasshoppers into the linear accelerator at the Argonne National Laboratory in Illinois decided to take a closer look.

That’s not as strange as it sounds. With synchrotron X-rays, you can get highly detailed images and video, so the Argonne lab is used for medicine and art and archaeology studies, as well as looking inside grasshoppers to see how their bodies work.

Jon F. Harrison of Arizona State University and Jake Socha of Virginia Tech have studied insects at Argonne for years, but their work on gravity came about by accident. Some X-rays showed different results when grasshoppers were right side up or upside down.

When new tests refined their observations, the researchers learned that gravity has a significant effect on the grasshopper equivalents of blood pressure and breathing. And furthermore, grasshoppers have adaptations that help minimize the disturbance caused by gravity.

Insects and gravity have not gotten much, or indeed any attention, Dr. Socha said, and the findings could change broader understandings of insect physiology. “People are not studying this,” he said. “This is a new discovery.” The researchers published their results Monday in the Proceedings of the National Academy of Sciences.

David Hu at Georgia Tech, whose research addresses the intersection of physics and biology in animals, said, “This study shows that grasshoppers have amazing control of their body pressure at different orientations. The authors’ previous work showed that beetles seem to be able to do the same thing.” He was not involved in the study.

“We see insects and assume that just because they’re smaller, they’re less complicated than us. That’s just not true,” he said.

Dr. Harrison and Dr. Socha first noticed a problem while they were doing synchrotron X-rays of grasshoppers to study their air sacs, which are a bit like lungs. The results didn’t seem to make sense. “We thought we had made a mistake,” Dr. Socha said.

Then they realized that they hadn’t been paying attention to whether the grasshopper was head up or head down in the container that held it. Grasshoppers, like other insects, get oxygen through tubes, or trachea that are open to the outside air and branch into smaller and smaller tubes in the insect’s body. All insects have these, and some have air sacs, to store and pump air, as grasshoppers do.

It turned out that the tubes were more compressed at the bottom of the animal, because gravity was causing the grasshopper equivalent of blood to sink to the bottom half of the animal.

This is similar to what happens when humans stand up quickly and become lightheaded, or the way blood goes to the head during a headstand. Humans have valves in the circulatory system to combat this problem, and your heart rate can increase, to pump blood faster.

But insects don’t have the same system. A grasshopper has a heart, but most of its body had been thought to be like one big bag of blood. Nonetheless, the researchers found that the grasshoppers could substantially counter the effect of gravity when they were conscious. When they were anesthetized with nitrogen, they could not.

The discovery reveals something brand-new about the intersection of physics and biology. For now, it seems to be true in grasshoppers, at the least, and probably beetles, based on another study of Dr. Socha’s. But all insects are going to be subject to the same physical forces, which few scientists have ever paid attention to before. And it seems unlikely, said Dr. Socha, that grasshoppers are the only ones to evolve coping mechanisms.

Still, it may be that smaller insects, like fruit flies, don’t need to regulate their bodies in the same way. Dr. Hu said that ants maintain the same metabolism whether they are walking horizontally or straight up a wall. Future studies will show at what size insects have these adaptations, and what exactly they are.

As to the potential practical impact of the findings, Dr. Socha said some research on insects is related to human biology, and should take into account these gravitational effects. And Dr. Hu said that the discovery could influence the design of so-called lab-on-a-chip devices that use tiny amounts of fluid.

FacebookshareGoogle+sharePinterestpin it
The Evolution of Maternity StyleMedical News Today: What are the benefits of high intensity interval training (HIIT)?
Latest