Home Cooking for Profit? Sure, Just Not in New Jersey 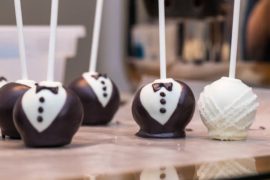 FRANKLIN, N.J. — With just a little white chocolate and some sprinkles, Heather Russinko can make a wedding gown in under seven minutes. Give her five minutes more, and she can dress a groom, too. Three buttons, a bow tie, and a tuxedo swell over a round white chest.

Ms. Russinko uses dips and drips instead of pins and pleats to outfit the couple, who are cake pops, lollipop-size pastries made of batter and frosting. She has made beach-themed pops for a Sweet Sixteen party and lopsided, whimsical monsters with googly eyes for Halloween.

But she lives in New Jersey, the only state where it remains illegal to sell homemade foods for profit, so she can only give away her creations or donate them to bake sales. If she tried to sell them, she could be fined up to $1,000. Every other state has dropped such restrictions.

“There’s this rogue law standing in my way and preventing me from earning an income,” said Ms. Russinko, one of three named plaintiffs in a lawsuit against the state’s Department of Health. “It’s not like I am out there trying to sell drugs or do anything illegal. It’s a cookie. Or in my case, a cake pop.” 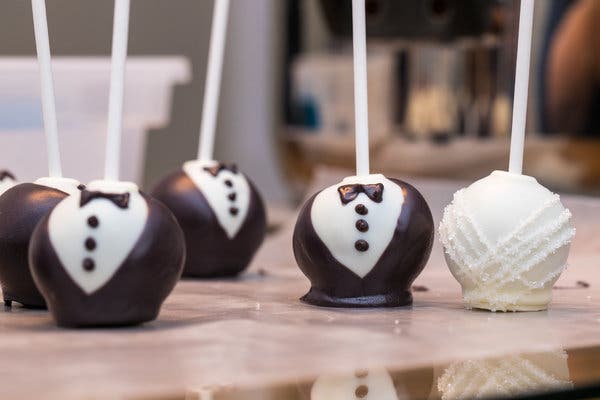 For now, Ms. Russinko can only give away her creations or donate them to bake sales.CreditJeenah Moon for The New York Times

New Jersey’s sanitary code, like most states’, is derived from federal food laws based on a 1906 act; these codes have long excluded home kitchens from the definition of retail food establishments.

But one by one, states have eased those limits or enacted so-called cottage food laws, which allow the sale of homemade foods like breads, granola, dried herbs and jams. Many of these laws set a cap on annual gross sales and require that home kitchens pass safety inspections.

In just the last decade, 19 states and the District of Columbia have moved to allow sales of homemade foods, said Emily Broad Leib, the director of the Harvard Law School Food Law and Policy Clinic and a lead author of an August 2018 report that documented a “dramatic increase in small-scale food production” nationwide.

Local food sales, which include those from cottage food operations and farmers’ markets, ​totaled ​ $5 billion in 2008, according to a 2016 article by Tom Vilsack​, then the secretary of agriculture. The report projected they would reach $20 billion this year​.​

“When the recession hit, people were looking for side jobs, ways to make extra money,” said David Crabill, who runs Forrager, a blog about cottage food that tracks state laws. “It’s a very natural thing to share food within your own community and to sell it.”

For almost a decade, the New Jersey Home Bakers Association, which has more than 350 members including Ms. Russinko, has been lobbying elected officials for the right to sell homemade goods. A bill that would allow such sales has passed in the State Assembly three times, most recently by a unanimous vote in 2016.

But the legislation has stalled in the State Senate. Senator Joseph F. Vitale, the chairman of the Health, Human Services and Senior Citizens Committee, has never put it up for a vote or a hearing in committee, so the entire Senate cannot vote on it.

Senator Joe Vitale, the chairman of the Health, Human Services and Senior Citizens Committee, has never put the home bakers’ bill up for a vote in committee.CreditMel Evans/Associated Press

“Our office is consumed with issues that are, I’m sorry to say, more important,” Mr. Vitale, a Democrat from Woodbridge, said in a phone interview. “I support the fact that they want to pursue this type of entrepreneurship, but it has to be done in a manner that is safe.”

In 2017, the association bypassed the legislature and sued the state health department, which is responsible for enforcing the ban, saying the ban violates the equal protection clause in the New Jersey Constitution.

The home bakers enlisted an influential ally: the Institute for Justice, a nonprofit libertarian public interest law firm based in Arlington, Va.

In 2013, the institute started the National Food Freedom Initiative to challenge restrictions on laws related to food. The New Jersey bakers reached out to the institute in 2016 after reading about its work nationwide, including lawsuits in Wisconsin and Minnesota that significantly expanded cottage food laws there. A lawyer from the institute, Erica Smith, is lead attorney on the New Jersey suit.

“States aren’t doing this on their own,” Ms. Broad Leib said. “They’re doing it because they’re pressured to pass these things.”

Across the country, there are continuing struggles to expand cottage food laws. California legalized cottage food sales in 2013 and cleared the way for selling homemade meals in 2018, but municipalities are still working out the details. In Texas, which passed its first such law in 2011, new legislation that takes effect in September will significantly loosen cottage food restrictions.

A few states, like Wyoming and North Dakota, have “food freedom” acts, which exempt home bakers from any licensing, permitting or inspection requirements, as long as their dishes don’t contain meat.

After years of advocacy, bakers in Connecticut got a cottage food law passed in late 2018, and many bakers are just now in their first months of production. Sales are limited to $25,000 a year, less than most states allow.

Chonte Fields, a young mother who lives in Ashford, Conn., started selling her baked goods a few months ago. She is the 43rd home baker to be approved — she can tell, because it’s the number on her license — and she mostly makes cupcakes, taking home a few hundred dollars a month. She sells at local campgrounds and events where several bakers gather.

Chonte Fields, who lives in Ashford, Conn., got her cottage food license just this summer.CreditMonica Jorge for The New York Times

“The plan is to try to take the kids to Disney World next year,” she said in a phone interview, whispering so her children, ages 3 and 9, couldn’t hear. “All of the cupcake money goes toward that.”

In New Jersey, the Department of Health asked a Superior Court judge to dismiss the bakers’ lawsuit, arguing that the ban on sales was meant to ensure that consumers have “food that is safe and unadulterated.” The motion was denied. The state attorney general’s office said it would not comment on pending litigation.

“When it comes to cottage foods, you want products that have a very low risk of illness,» said Steven Mandernach, the executive director of the Association of Food and Drug Officials, a nonprofit organization based in York, Pa., that works to streamline regulations. “Baked goods are a good example.”

The home cooks insist their products are safe. If there were a health risk, they ask, why would they be allowed to donate food to bake sales? They say lawmakers and regulators are simply trying to protect commercial bakeries.

Mr. Vitale, the Senate committee chairman, denied that. “Not in any way am I trying to protect mom-and-pop bakeries, or brick-and-mortar bakeries,” he said.

Still, Mr. Vitale said established bakeries have a greater investment at stake, and could lose business. “If there are going to be, let’s say, 20 home bakers that are created through this legislation and they’re selling their product to the public, it’s likely that if they didn’t exist, those public persons would have gone to a bakery,” he said.

Ms. Fields’s Celebration Donuts, which she makes from scratch to sell around Connecticut.CreditMonica Jorge for The New York Times

Mr. Vitale, who met with association members last year, said he was open to discussing the legislation and was looking at other states for models of successful cottage food laws, hoping to answer his questions about inspection processes and taxation before letting the Senate vote.

The New Jersey bill, he said, “states that they can earn up to $50,000. That’s real money. My question to them would be: Are you going to pay income tax on that?”

Martha Rabello, another named plaintiff in the New Jersey suit, said she tried to do business the legal way: She rented a commercial kitchen, but the cost proved prohibitive, and she closed down shop after just a few months.

“If you can start from home, you have a better chance of this business surviving,” she said. “We’re not asking for the Wild West. We’re asking for cookies. This is just a way for people to supplement their income.” 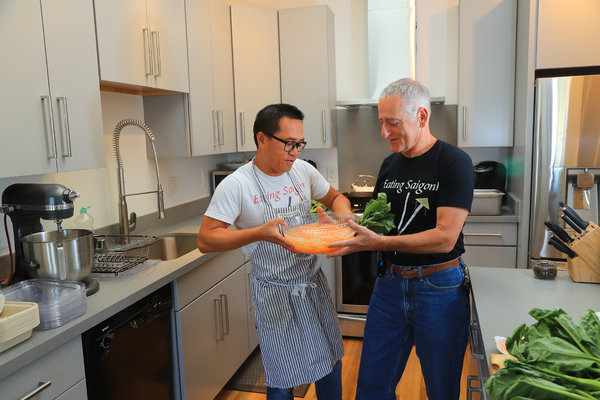 They Gather Secretly at Night, and Then They (Shhh!) Eat