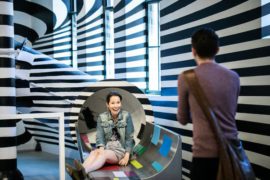 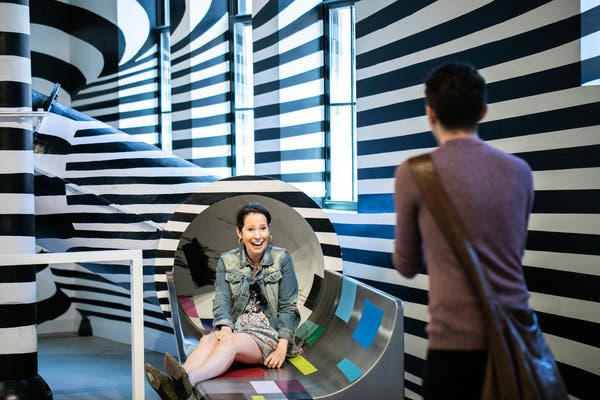 Dina Auslander rides a slide at Showfields, which houses many pop-up stores in SoHo.CreditJeenah Moon for The New York Times

Within a half-mile radius in downtown Manhattan, there are five different matcha stores: MatchaBar, Matchaful, Cha Cha Matcha, the other Cha Cha Matcha and Matcha n’ More, which are each less than five minutes apart on foot.

Matcha, a kind of powdered green tea used in Japanese tea ceremonies, has become a popular drink in the wellness scene for its grassy green color and antioxidants. High-end cafes in SoHo like Matchaful blend it with nut milks or spices and sell it for $7, more than the cost of a latte.

At the same time, places that once catered to healthy-minded New Yorkers before wellness became a buzzword — spots like Souen, Integral Yoga Natural Foods and Angelica Kitchen — are closing. All three opened in the 1970s, when SoHo was home to an artistic and creative community.

In the 1960s and ’70s, the neighborhood was a magnet for artists. Then came fancy shops and French restaurants. Most young artists haven’t been able to afford to live or maintain studios there for the last couple of decades.

Instead there is By Chloe, a vegan fast food restaurant, which sells a quinoa taco salad for $12.45; Brodo, which sells cups of bone broth for $10; the Good Market, which sells pineapple raspberry kombucha organic slushies for $4.50; Welleco and the Nue Co, both supplement stores; the Hemp Garden, where CBD sheet masks sell for $29.99; the Detox Market, where the Vintner’s Daughter Active Treatment Essence face oil is $225; Lululemon and Nike; boutique fitness establishments like Y-7, New York Pilates (three locations), SLT and SoulCycle, where classes are upward of $30.

The Sustain pop-up, with a neon art display.CreditMirra Studio

This took the form of a high-tech bodega at 579 Broadway, a space that once housed an Aldo shoe store and whose rent for the space Kind declined to share. At the pop-up, the sugar content from Kind’s competitors could be revealed by scanning a QR code.

Some of the few dozen people there bypassed the nutritional information to stuff free plastic fanny packs with free Kind Bars.

The company hosted a pop-up in Times Square two years ago, but Jenna Keplesky, who works in Kind’s communications department, lobbied to move this one to SoHo. “I was encouraging locations that were more cost effective, but Jenna wanted the right brand message,” said Daniel Lubetzky, the C.E.O. of Kind. “I do think there’s a sense that SoHo is more representative and ahead of the curve in health and wellness in New York City.”

The neighborhood is also known to have a steady stream of foot traffic from New Yorkers and tourists alike, Ms. Keplesky said.

In many cases, fanciful and high-concept pop-ups have followed wellness retailers to SoHo and its surrounding streets.

Blume, which sells self-care and menstrual products marketed to young women and teenagers, had a pop-up at 224 Mulberry Street in NoLIta in February that included a slumber party and panel discussion. The founders, Taran and Bunny Ghatrora, wrote in an email that they chose the location because it is one of their favorite neighborhoods and that a large portion of their New York community is based there.

A visitor kicks back at the Buffy pop-up.

The condom company Sustain Natural hosted the Get on Top Pop-Up in April 2018 at 208 Bowery, with neon vulva art installations and tampon-filled bathtubs leading into a back event space called the womb.

Meika Hollender, the C.E.O., said that foot traffic and a neighborhood affinity for wellness made her choose the Bowery: “There are so many like-minded wellness studios and brands showcasing their products in this area that it felt like a natural opportunity to reach consumers in a fun and accessible way. I mean, who wouldn’t be curious walking past a vagina-themed pop-up”

Buffy, which makes comforters out of recycled plastic bottles and eucalyptus plants, had a “physical touch-point” called Soft-Space at 150 Wooster Street (where, last year, a penthouse sold for $32.6 million) during the 2018 holiday season. According to a news release for the company, inspiration came from Buckminster Fuller and the hippie modernist movement of the 1960s and ’70s.

Clean Market, a store on 54th Street and Second Avenue that sells natural beauty products and services like vitamin IV drips, has a pop-up in NoLIta at Project by Equinox on Mulberry Street. “We want the downtown crowd to get to know us,” said the founder Lily Kunin one afternoon as she sent an associate on an errand a few blocks north to the Farmer’s Dog pop-up at Showfields at 11 Bond Street.

An exterior view of Showfields.CreditJeenah Moon for The New York Times

Currently Showfields has pop-ups decorated with potted plants and pink velveteen chairs from the Australian skin care brand Frank Body and Quip, a dental company that frequently advertises on podcasts. The cafe, called Coffee ’n Clothes, sells miniature cupcakes and lattes emblazoned with the logos of fashion brands. (Showfields, which calls itself “the Most Interesting Store in the World,” occupies a 1913 NoHo building that, before its purchase in 2015 by FRF Realty for $26 million, housed a 43-bed women’s shelter.)

Despite the fact that the store was virtually empty on a recent Monday afternoon, some tenants, who pay a flat fee for space, are pleased with early results.

“What we’ve managed to do in sales in three weeks was greater in total than one of our retail partners who has 13 or 14 doors nationwide,” said Jasmina Aganovic, the founder of Mother Dirt, a skin care line in Boston that has a second-floor space at Showfields. “It’s a sexy location in New York City, and we have a large concentration of customers in New York and Brooklyn in particular.”

Large companies have used wellness businesses as destinations for their own events. OtterBox introduced its Otter & Pop phone cases to press at Chillhouse, a cafe, nail salon and massage studio on the neighboring Lower East Side.

Landlords are enthusiastic about wellness-related tenants, according to Paul Wexler, the head of Wexler Healthcare Properties at the Corcoran Group. “Landlords are generally encouraged by it,” he said. “It’s a way to fill retail spaces, and an amenity to their buildings. There are spaces we’re marketing with that in mind.”

Some smaller wellness businesses are looking to spread brand awareness if they could only find the right space. Justine Monsul, the founder of Monfefo, a beverage company that makes organic pressed ginger and turmeric shots, has been looking for a pop-up storefront.

“Trying to find a place in New York is like winning the lottery,” she said on the phone during a trip to Israel. “I want to share my story and have more of a relationship to my customers. You don’t just want a store, you want an experience. You want some palo santo burning.”

Colette Dong, the co-founder and C.E.O. of the Ness, opened a pop-up trampoline workout studio in nearby TriBeCa in a location that was a Bikram yoga studio. The pop-up lease was “a way to get our feet wet without getting locked into a five- or 10-year lease term and test the demand for it,” Ms. Dong said.

“Will we even have studios in 5 years?” Ms. Dong said. “Will there be studios to do our online streaming workouts? Will we be working out with robots?”

Maybe best not to commit to anything too long-term.