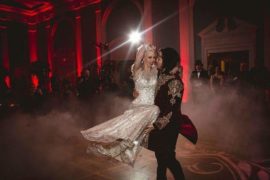 Daley South had six bridesmaids in her 2016 wedding to Logan South; one of them was her husband’s girlfriend.

The Souths are in an open and polyamorous relationship and have been since they started dating seven years ago. “We were actually all dating at first,” Ms. South said of her bridesmaid, Ilona Westenra. “I really enjoyed having her be a part of our big day.”

There weren’t any rules about how Mr. South should interact with his girlfriend during the wedding. All of their guests knew about their relationship status (although their parents weren’t completely on board) and Ms. South was perfectly fine with them spending time together during the event, which was at the TFWC Mansion in Austin, Tex.

“As long as he and I were the main focus for that one big day, I was perfectly content,” said Ms. South, 31, who is a certified wedding planner. So, Mr. South, 32, did kiss his girlfriend a few times but said he spent “the entire night by my new wife’s side.”

People are becoming more curious about consensual non-monogamy. A 2015 study from the Journal of Sex Research found that searches for terms related to polyamorous, non-monogamous and open relationships have been rising steadily for the past decade.

But questions remain: Will the couple stay open after the wedding? What is a wedding like when the couple is non-monogamous? Are other partners invited or involved? What are the vows like? Actually, the most common question the Souths got was, “What’s the point of the wedding?”

Sarah Fraser, a licensed clinical psychologist practicing in New York City, specializes in unconventional partnerships and sexuality. She has heard from several patients that outsiders who have expressed “being non-monogamous might be acceptable before a couple gets married.” They felt those outsiders expected them to “close their relationship after marriage because then the relationship is more ‘serious.’”

But within their circle, everyone was extremely excited about the Souths’ union.

The groom’s girlfriend, Ms. Westenra, said through an email: “Being in a relationship with the groom obviously offered some awkwardness but the love far outweighed any uncomfortability. Seeing my boyfriend marry the love of his life was the most beautiful thing I’ve ever felt. The love in that room was so overwhelming I couldn’t feel anything but pure love and happiness for the two of them and in extension, myself, because I get to be a part of this wonderful family.”

People who choose to be in non-monogamous relationships are often perceived as anti-commitment, said Cathy Keen, 39, the community manager of alternative dating app Feeld and who is one-third of her relationship.

But that’s just wrong, said Ms. Keen, who was also asked “what the point was” when she married her non-monogamous partner. “The thing I think a lot of people presume about a relationship that’s not traditional, monogamous or heteronormative is that commitment is not valued. It’s based upon sex and being able to move quickly, and that’s just wrong,” she said.

“Thomas and I are very committed to one another and our family unit.” She’s been married to her husband, Thomas Keen, 34, since 2013, and they’ve always been open. They’ve been in a three-person relationship for two years. The Keens also have an 8-year-old son.

The couple, though, weren’t dating anyone else when they got married. Their third partner wasn’t in the picture at the time, but if she had been, Ms. Keen said she would have been invited to the wedding.

The Souths had 350 people at their wedding. “We wanted absolutely everyone who has made an impact on our lives to be there,” Ms. South said.

On the big day, it seems common for open couples to invite or include their other partners. Anastasia Stevenson, a wedding planner in Los Angeles and Boothbay Harbor, Me., has planned hundreds of events, including two polyamorous ceremonies. One took place at a spa in Malibu, Calif., where a heterosexual couple was having a legal ceremony, with their additional partners incorporated into various parts of the event.

“Two women in their relationship served as bridesmaids; one man in the relationship acted as best man for the groom and ‘gave’ the bride away,” Ms. Stevenson said. “The event was framed as a celebration for all of them, not just the marrying couple.”

The other wedding she planned for a polyamorous couple was a little more complicated because the bride’s parents didn’t know about their openness, though the other partners were still invited.

The actor Nico Tortorella, 31, wed the founder of the be.come project, Bethany C. Meyers, 33, in 2018. Their ceremony took place at the Manhattan Marriage Bureau with no guests. Their photographer was their witness, and they also had an assistant there to make sure things ran smoothly. They didn’t have a reception. However, Tortorella’s ex-boyfriend, Andrew Morrison, designed their outfits and was there to help them get ready.

(The couple does not use gender-specific honorifics, and each prefers the pronoun they.)

“Even if they were still dating, I would have wanted him to design our outfits,” Meyers said. Tortorella said if Meyers had been in a meaningful relationship at the time, they would have wanted that person there.

One other small detail noted in the South and Keen weddings was the elimination of any mention of “forsaking all others” in the ceremony. At the same time, neither couple put anything in their self-written vows about continuing to keep their relationship open. The closest the Keens came was in a speech Ms. Keen gave during the reception.

“I wrote a poem and in there I said something about how many people are a part of our relationship, no one picked up on it,” she recalled.

Other than that, all of these weddings were a lot like any other wedding you’d get invited to or hear about. “We wanted the wedding to be a complete showcase of who we are as a couple,” Ms. South said. “We wanted people to walk in and immediately say, ‘Yep, this is Logan and Daley,’” Mr. South said. That meant having a twin flame ceremony, custom dishes (Mr. South’s request) and no first look. “It was super important to me to have the first time we saw each other at the end of the aisle,” Ms. South said.

For the Keens, that meant getting married at Chelsea Town Hall in London, riding off on bikes with water bottles tied to the back wearing leather jackets with “Just Married” written on them and having a big party at a club with hundreds of guests. But most symbolically, it also meant incorporating nature, because “this is the most natural relationship either of us have ever had,” Ms. Keen said. When they decided to “open” their relationship, she said, it was “natural.” After their town hall ceremony, they had another ceremony that 120 friends and family members attended at Wormholt Park in London. When they said their vows, they took off their shoes.

“It felt right, this relationship felt to both of us not like a trap, not like this impossible set of ideals that you have to live up to, which I really felt in previous relationships and so did he,” Ms. Keen said. “So, we took it out of a church, we got rid of the whole pomp and procedure, and we made it about family and our son and about the earth and the moment.”

Tortorella and Meyers, who are nonbinary, prioritized intimacy and their outfits. “We were both wearing pants with like a robe over it and we both had crowns on,” Meyers said. Tortorella said the Grecian-style designs reflected them. “What we wore, we both represented this gender nonconformity and this equalness that is really important in our relationship,” said Tortorella, who addresses their journey to fluidity in the memoir “Space Between,” which was recently published by Penguin Random House.

The Malibu wedding Ms. Stevenson planned involved clothing optional events and the hosts were all in various stages of undress throughout the event.

“The overall feeling was one of joy and a deliberate playfulness without inhibitions,” Ms. Stevenson said. She believes this is what can make a non-monogamous wedding different from that of a monogamous couple’s wedding. “I absolutely think that relationship status and a couple’s attitude toward their relationship and life in general directly affects their event planning,” she said. The other wedding was “completely traditional.”

However, even though that still-closeted couple’s wedding was more “staid and rigid,” Ms. Stevenson said, they hosted another party after the formal ceremony and reception, where they celebrated openly with their other partners, without their family.

Ms. Keen believes it takes a certain person to make an open relationship work, and “not a neurotic person or a paranoid person.”

“All three of us are very, very comfortable in our own skin,” she said of herself, her husband and their girlfriend. “That makes you a much better participant in this kind of relationship. Because you’re not relying on anyone else to give you stability. You’re relying on yourself, you’re making your own rules and you have your own boundaries.”

All three brides found wedding planning to be minimally stressful, if at all.

At the end of the day, Meyers believes the essence of a wedding is the same no matter what the couple believes in terms of monogamy. “It was really just about Nico and me and the most beautiful day I’ve ever experienced,” Meyers said.

“And I feel like no matter what kind of wedding you have, that feeling exists. It’s the underlying theme, and I think that’s what makes weddings so special.”

FacebookshareGoogle+sharePinterestpin it
Woodbury Common: Bargain Hunting in the Fashion AfterlifeA CBD-Infused Cream. For My Feet?
Latest